What Do Hurricanes Harvey and Irma Portend?

Natural disasters are the result of the interaction of a natural phenomenon with human beings and their built environments. Globally and in the U.S., large increases in coastal populations are causing corresponding increases in hurricane damage and these are now being compounded by rising sea levels and changing storm characteristics owing to anthropogenic climate change. In this talk, I will describe projections of changing hurricane activity over the rest of this century and what such projections tell us about how the probabilities of hurricanes like Harvey and Irma have already changed and are likely to continue to do so.

Can't make it? Tune in to the LIVE WEBCAST: http://bit.ly/2y9spsU

Kerry Emanuel is a prominent meteorologist and climate scientist who specializes in moist convection in the atmosphere, and tropical cyclones. His research interests focus on tropical meteorology and climate, with a specialty in hurricane physics. His interests also include cumulus convection, the role of clouds, water vapor, and upper-ocean mixing in regulation of climate, and advanced methods of sampling the atmosphere in aid of numerical weather prediction.

Emanuel received an S.B. degree in Earth and Planetary Sciences and a Ph.D. in Meteorology (1978) both from MIT. After completing his doctorate, he joined the faculty of the Atmospheric Sciences department of the University of California at Los Angeles where he remained for three years, with a brief hiatus filming tornadoes in Oklahoma and Texas.

In 1981 he joined the faculty of the Department of Meteorology at MIT and was promoted to Full Professor in 1987 in what had since becomes the Department of Earth, Atmospheric and Planetary Sciences (EAPS). In 1989 he assumed directorship of EAPS Center for Meteorology and Physical Oceanography, a post he held until 1997. Subsequently he chaired the EAPS Program in Atmospheres, Oceans, and Climate from 2009 to 2012. He is co-founder of the MIT Lorenz Center, a climate think tank which fosters creative approaches to learning how climate works.

Professor Emanuel is the author or co-author of over 200 peer-reviewed scientific papers, and three books, including Divine Wind: The History and Science of Hurricanes, published by Oxford University Press, and What We Know about Climate Change, published by the MIT Press. 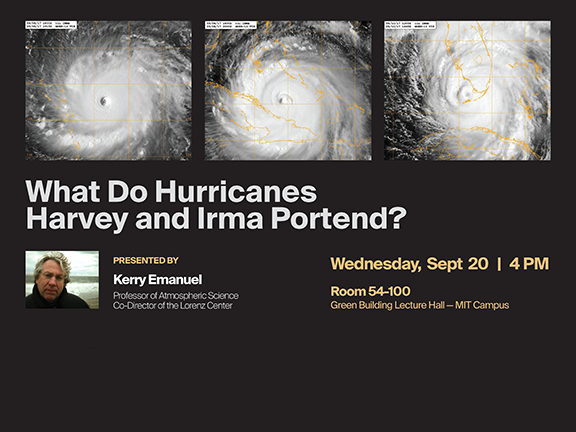