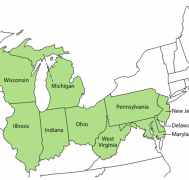 In the absence of federal adoption of climate change policy, states and municipalities in the United States have been taking action on their own. In particular, 29 states and the District of Columbia have enacted renewable portfolio standards (RPSs) requiring that a certain fraction of their electricity mix come from renewable power tech­nologies, such as wind or solar. But now some states are rethinking their RPSs. A few are making them more stringent, but many more are relaxing or even repealing them.

To Noelle Eckley Selin, an associate professor in the Institute for Data, Systems, and Society and the Department of Earth, Atmospheric and Planetary Sciences, and Emil Dimanchev SM ’18, a senior research associate at the MIT Center for Energy and Environmental Policy Research, that’s a double concern: The RPSs help protect not only the global climate, but also human health.

Past studies by Selin and others have shown that national-level climate policies designed to reduce carbon dioxide (CO2) emissions also significantly improve air quality, largely by reducing coal burning and related emissions, especially those that contribute to the formation of fine particulate matter, or PM2.5. While air quality in the United States has improved in recent decades, PM2.5 is still a threat. In 2016, some 93,000 premature deaths were attributed to exposure to PM2.5, according to the Institute of Health Metrics and Evaluation. Any measure that reduces those exposures saves lives and delivers health-related benefits, such as savings on medical bills, lost wages, and reduced productivity.

If individual states take steps to reduce or repeal their RPSs, what will be the impacts on air quality and human health in state and local communities? “We didn’t really know the answer to that question, and finding out could inform policy debates in individual states,” says Selin. “Obviously, states want to solve the climate problem. But if there are benefits for air quality and human health within the state, that could really motivate policy development.”

Selin, Dimanchev, and their collaborators set out to define those benefits. Most studies of policies that change electricity prices focus on the electricity sector and on the costs and climate benefits that would result nationwide. The MIT team instead wanted to examine electricity-consuming activities in all sectors and track changes in emissions, air pollution, human health exposures, and more. And to be useful for state or regional decision-making, they needed to generate estimates of costs and benefits for the specific region that would be affected by the policy in question.

To begin, the researchers developed the following framework for analyzing the costs and benefits of renewable energy and other “sub-national” climate policies.

With that modeling framework, the researchers can estimate the economic cost of a renewable energy or climate policy and the benefits it will provide in terms of air quality, human health, and climate change. And they can generate those results for a specific state or region.

As a case study, the team focused on the Rust Belt — in this instance, 10 states across the Midwest and Great Lakes region of the United States (see Figure 1 in the slideshow above). Why? Because they expected lawmakers in some of those states to be reviewing their RPSs in the near future.

On average, the RPSs in those states require customers to purchase 13 percent of their electricity from renewable sources by 2030. What will happen if states weaken their RPSs or do away with them altogether, as some are considering?

To find out, the researchers evaluated the impacts of three RPS options out to 2030. One is business as usual (BAU), which means maintaining the current renewables requirement of 13 percent of generation in 2030. Another boosts the renewables share to 20 percent in 2030 (RPS+50%), and another doubles it to 26 percent (RPS+100%). As a baseline, they modeled a so-called counterfactual (no-RPS), which assumes that all RPSs were repealed in 2015. (In reality, the average RPS in 2015 was 6 percent.)

Finally, they modeled a scenario that adds to the BAU-level RPS a “CO2 price,” a market-based climate strategy that caps the amount of CO2 that industry can emit and allows companies to trade carbon credits with one another. To the researchers’ knowledge, there have been no studies comparing the air quality impacts of such carbon pricing and an RPS using the same model plus consistent scenarios. To fill that gap, they selected a CO2 price that would achieve the same cumulative CO2 reductions as the RPS+100% scenario does.

Results of the analysis

The effects of the policy scenarios on PM2.5 concentrations (relative to the no-policy case) mostly occur in the Rust Belt region. From largest to smallest, the reductions occur in Maryland, Delaware, Pennsylvania, Indiana, Ohio, and West Virginia. Concentrations of PM2.5 are lower under the more stringent climate policies, with the largest reduction coming from the CO2 price scenario. Concentrations also decline in states such as Virginia and New York, which are located downwind of coal plants on the Ohio River.

The analysis that assumes a carbon price yielded some unexpected results. The carbon price and the RPS+100% both bring the same reduction in CO2 emissions in 2030, so the climate benefits from the two policies are the same — $9.5 billion. But the CO2 price brings health benefits of $29.7 billion at a cost of $6.4 billion.

Dimanchev was initially surprised that health benefits were higher under the CO2 price than under the RPS+100 percent policy. But that outcome largely reflects the stronger effect that CO2 pricing has on coal-fired generation. “Our results show that CO2 pricing is a more effective way to drive coal out of the energy mix than an RPS policy is,” he says. “And when it comes to air quality, the most important factor is how much coal a certain jurisdiction is burning, because coal is by far the biggest contributor to air pollutants in the electricity sector.”

While the CO2 price scenario appears to offer economic, health, and climate benefits, the researchers note that adopting a carbon pricing policy has historically proved difficult for political reasons — both in the United States and around the world. “Clearly, you’re forgoing a lot of benefits by doing an RPS, but RPSs are more politically attractive in a lot of jurisdictions,” says Selin. “You’re not going to get a CO2 price in a lot of the places that have RPSs today.”

And steps to repeal or weaken those RPSs continue. In summer 2019, the Ohio state legislature began considering a bill that would both repeal the state’s RPS and subsidize existing coal and nuclear power plants. In response, Dimanchev performed a special analysis of the benefits to Ohio of its current RPS. He concluded that by protecting human health, the RPS would generate an annual economic benefit to Ohio of $470 million in 2030. He further calculated that, starting in 2030, the RPS would avoid the premature deaths of 50 Ohio residents each year. Given the estimated cost of the bill at $300 million, he concluded that the RPS would have a net benefit to the state of $170 million in 2030.

When the state Legislature took up the bill, Dimanchev presented those results on the Senate floor. In introductory comments, he noted that Ohio topped the nation in the number of premature deaths attributed to power plant pollution in 2005, more than 4,000 annually. And he stressed that “repealing the RPS would not only hamper a growing industry, but also harm human health.”

The bill passed, but in a form that significantly rolled back the RPS requirement rather than repealing it completely. So Dimanchev’s testimony may have helped sway the outcome in Ohio. But it could have a broader impact in the future. “Hopefully, Emil’s testimony raised some awareness of the tradeoffs that a state like Ohio faces as they reconsider their RPSs,” says Selin. Observing the proceedings in Ohio, legislators in other states may consider the possibility that strengthening their RPSs could actually benefit their economies and at the same time improve the health and well-being of their constituents.

Emil Dimanchev is a 2018 graduate of the MIT Technology and Policy Program and a former research assistant at the MIT Joint Program on the Science and Policy of Global Change (the MIT Joint Program). This research was supported by the U.S. Environmental Protection Agency through its Air, Climate, and Energy Centers Program, with joint funding to MIT and Harvard University. The air pollution model was developed as part of the EPA-supported Center for Clean Air and Climate Solutions. The economic model — the U.S. Regional Energy Policy model — is developed at the MIT Joint Program, which is supported by an international consortium of government, industry, and foundation sponsors. Dimanchev’s outreach relating to the Ohio testimony was supported by the Policy Lab at the MIT Center for International Studies.

This article appears in the Autumn 2019 issue of Energy Futures, the magazine of the MIT Energy Initiative.

Institute for Data, Systems, and Society

MIT Joint Program on the Science and Policy of Global Change

Pathways to a low-carbon future

Shift to renewable electricity a win-win at statewide level