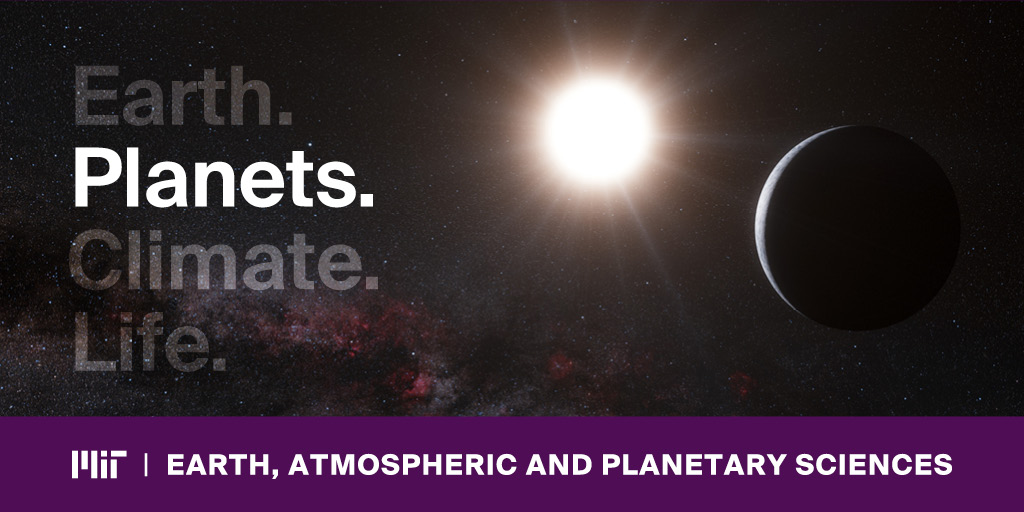 The innate human desire to understand the origins and natural systems of our own world and our place in the universe fuels the questions EAPS scientists seek to answer. How do planets form and evolve? What role do atmospheres play in their evolution, and how might this inform us about our own environmental changes? What can exoplanets tell us about our own solar system? Do other Earth-like planets exist? Could they be harboring life? Since the first astronomy course was taught in the department in 1956, EAPS scientists continue to make major discoveries and lead pioneering missions across the furthest reaches of our solar system and beyond. Advances in radar mapping provided the Apollo program with the first detailed topographic maps of the Moon, and laid the groundwork for future breakthroughs like the Mariner 10 mission’s discovery of Mercury’s magnetic field and probable molten core, as well as the recent high-resolution gravitational maps of Mars and the Moon. Our research has led from finding the first evidence of Pluto’s atmosphere to the startling recent photos of its thin haze taken by the New Horizons spacecraft. And our scientific gains have practical applications. The first detection of an atmosphere on an extrasolar planet has driven innovations in satellite technology and instrumentation, laying the groundwork for projects like the TESS (Transiting Exoplanet Survey Satellite) space telescope, specifically designed to find planets orbiting bright nearby stars, launching in 2018. 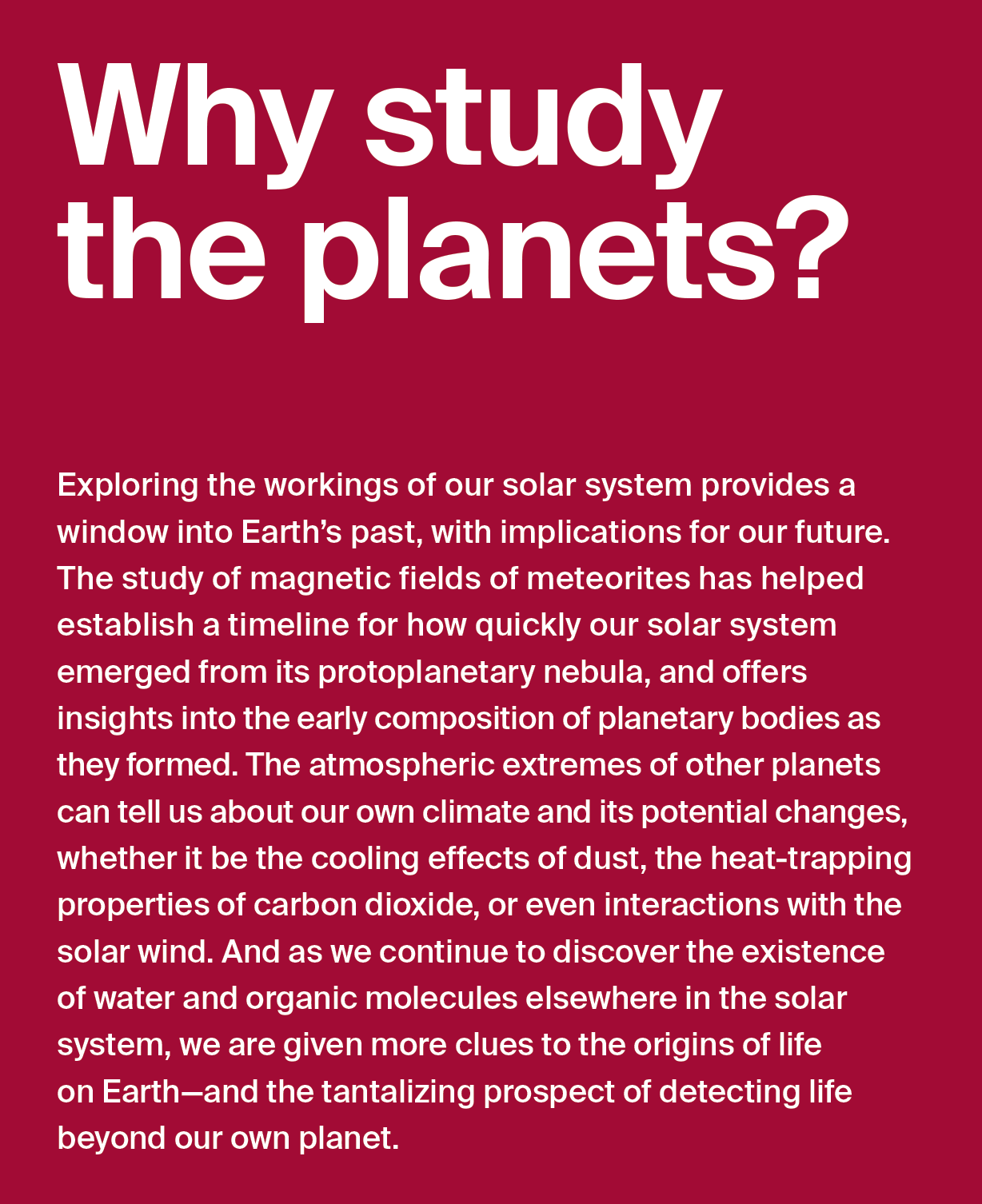 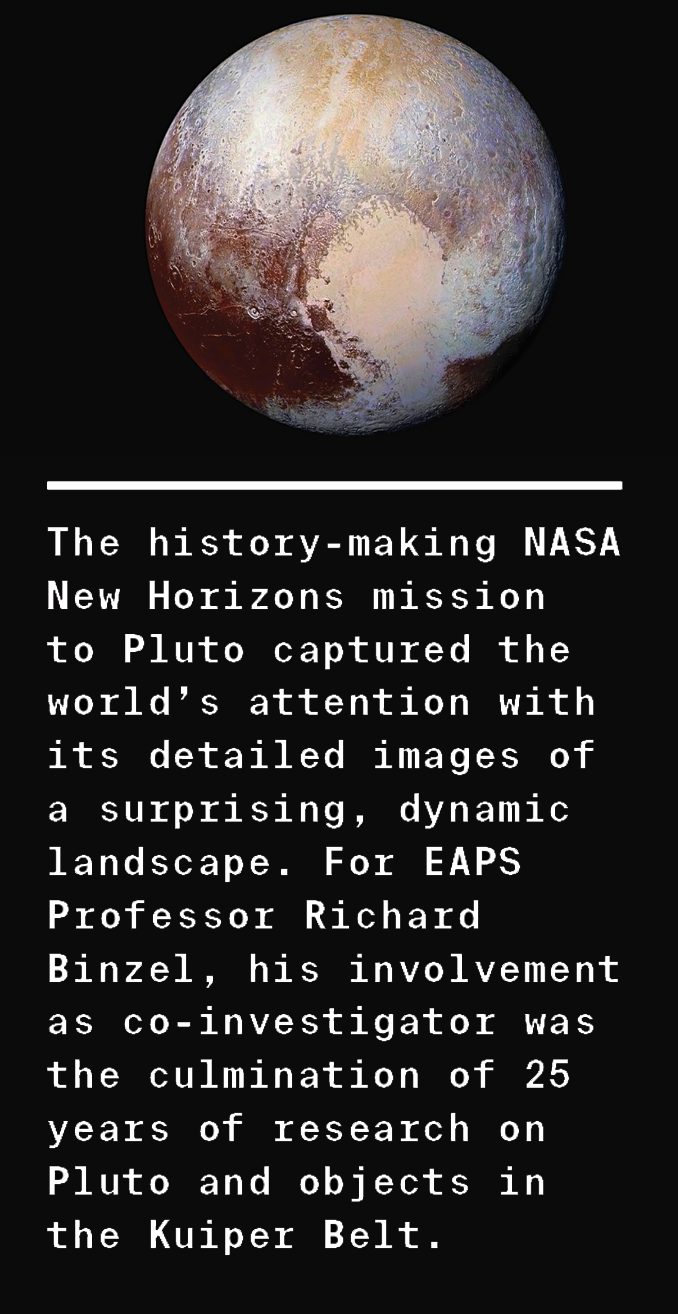 How do EAPS scientists conduct their work? 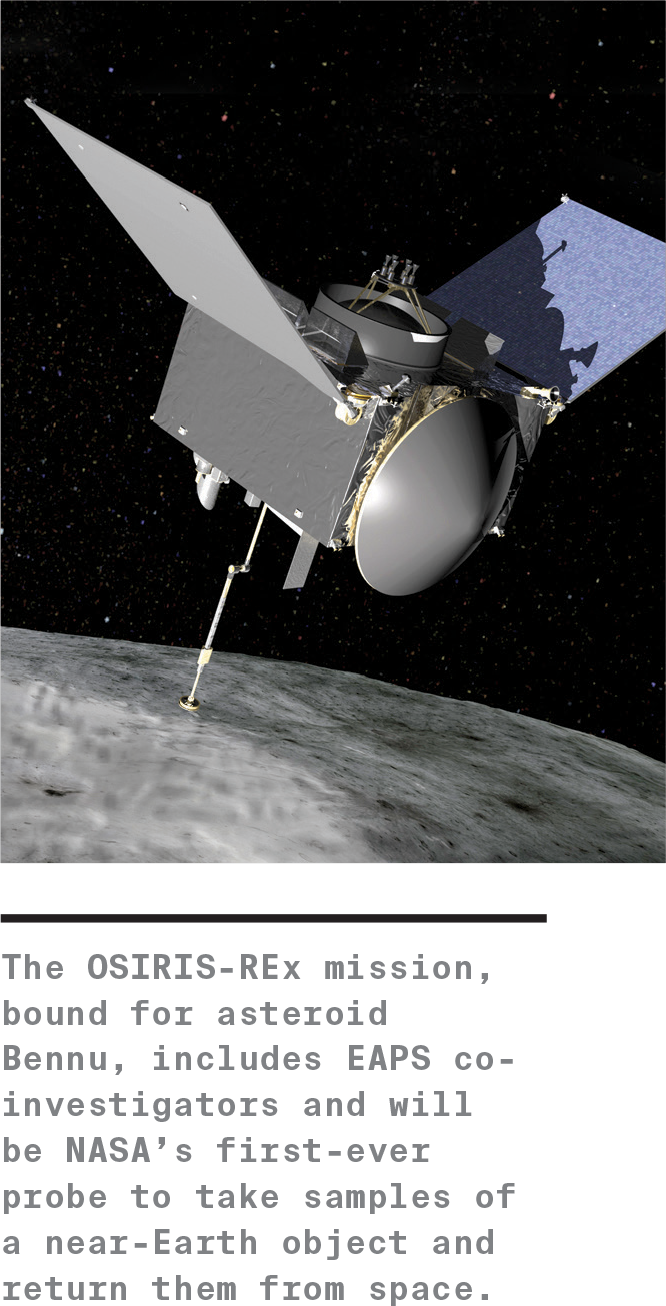 With boundless curiosity, EAPS planetary scientists and students collect data from telescopes all over the world, from field observations, robotic satellites, radar, and landers, using remote sensing technology, computer simulations and mathematical modeling—as only MIT can. We learn how planets form, studying meteorites more than 4.5 billion years old and sampling the remnant build- ing blocks of planets that survive today as asteroids and comets.

Many EAPS faculty are engaged in NASA missions: most recently the New Horizons mission to Pluto that beamed startlingly brilliant images of the icy dwarf planet back to Earth. EAPS alumna Cathy Olkin ’88, PhD’96 was Deputy Project Scientist on the New Horizons team, that also starred EAPS Professor Richard P. Binzel along with other EAPS alums and graduate students. 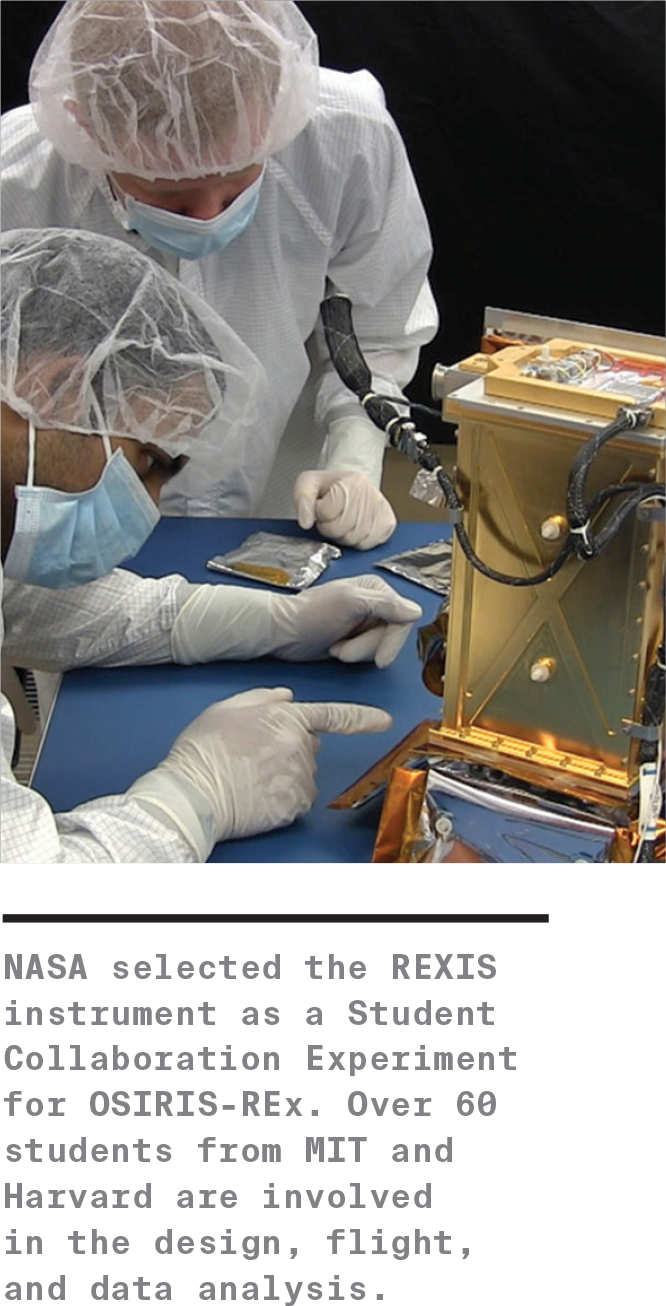 Planetary Sciences Professor Ben Weiss runs the Paleomagnetism Laboratory with its magnetically shielded “clean rooms” that can measure the magnetic properties of extraterrestrial samples. The Lab focuses on interdisciplinary problems in planetary science, geology and geophysics, like the his- tory of solar system magnetism and planet formation, developing sophisticated new magnetometry instrumentation to accompany NASA and European space missions.

Our own Wallace Astronomical Observatory, which was once directed by Professor James L. Elliot (1943-2011), professor of planetary astronomy and physics at MIT, whose research led to ground- breaking discoveries of the rings around Uranus and Pluto’s atmosphere, now offers six telescopes, including two with their own domes, to MIT planetary scientists and adventurous astronomers-in- training pursuing research through the UROP program.

Our methods and techniques are as diverse as our research topics. We also seek Earth-like processes such as tectonics, sedimentary layering, riverbeds and glaciers at distances that range from Mercury to Pluto. We seek signs of ancient rivers and oceans that could indicate the presence of life, and we study the evolutions of atmospheres and climates of other planets in the drive to discover more about our own. 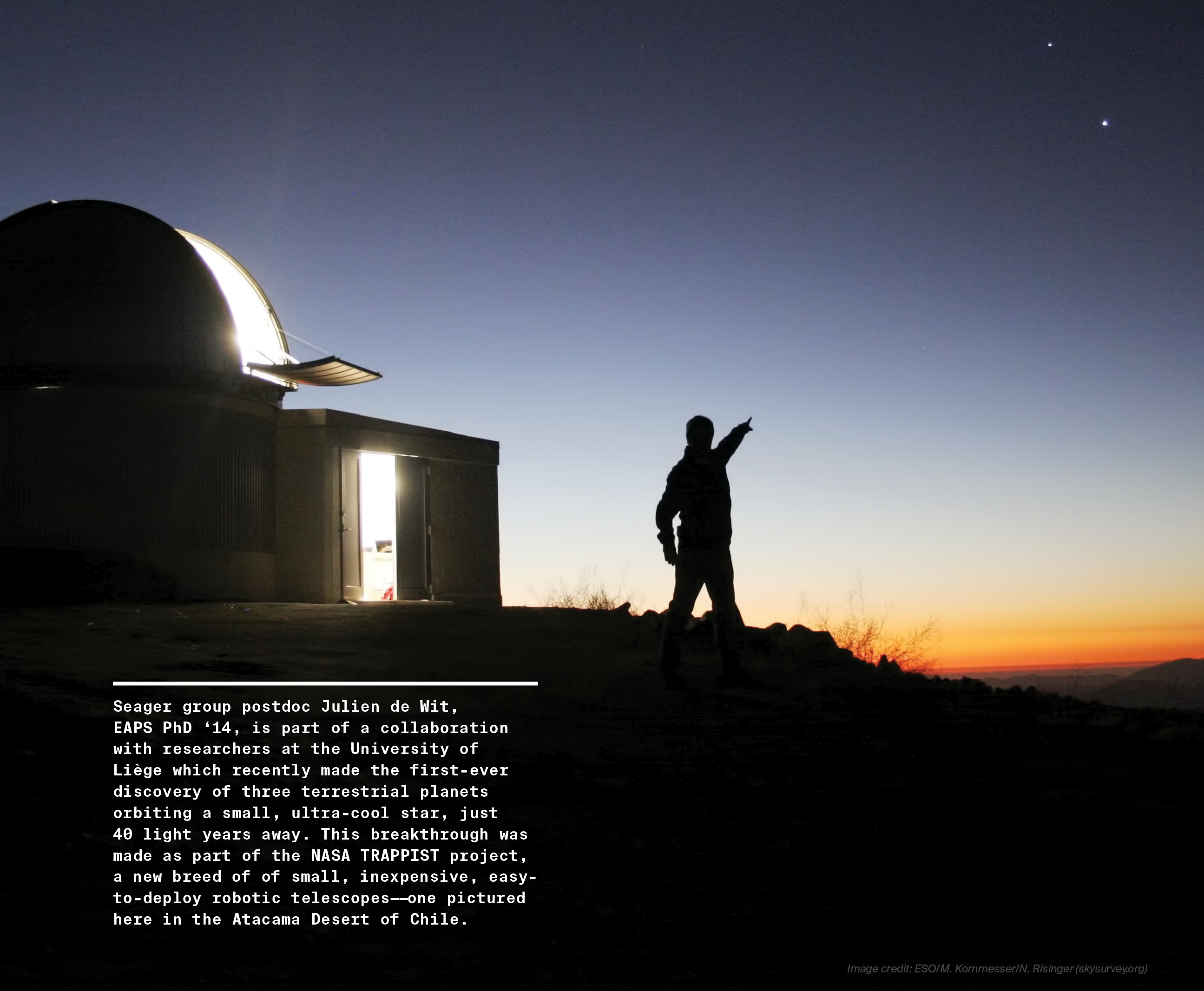