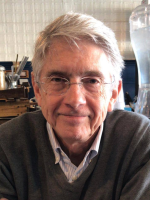 Jack Wisdom's research interests include the long-term evolution of the orbits and spins of the planets and natural satellites, qualitative behavior of dynamical systems and chaotic behavior.

Jack Wisdom is a Professor of Planetary Science at the Massachusetts Institute of Technology. He received his B.S. in Physics from Rice University in 1976, and his Ph.D. in Physics from the California Institute of Technology (Caltech) in 1981. He joined the MIT faculty in 1984. His research has focused on applications of Hamiltonian dynamics to problems of planetary dynamics. He has particularly focused on problems that involve chaotic behavior.

Wisdom is a coauthor (with Gerald Jay Sussman, Panasonic Professor of Electrical Engineering at MIT) of two books: "Structure and Interpretation of Classical Mechanics" and "Functional Differential Geometry." The novel feature of both books is the use of programming to provide a precise and unambiguous understanding of the ideas and mathematics of each subject.

Beginning in 1986, Wisdom and Sussman have investigated the stability of our solar system through long term numerical simulations. These investigations were initially carried out with the Digital Orrery, a special purpose computer built by Sussman and colleagues. In 1988 Wisdom and Sussman reported numerical evidence that the motion of Pluto, then considered one of the planets, is chaotic. The Digital Orrery is now retired at the Smithsonian Institution in Washington, DC. In 1992, Wisdom and Sussman showed that our solar system evolves chaotically through direct numerical integration of the full equations of motion. This result extended by two orders of magnitude the longest numerical integration of the solar system. It was made possible by two innovations: the development of a new integration algorithm ("Symplectic Maps for the N-Body Problem," of Wisdom and his Ph.D. student Matthew Holman), which is more stable and an order of magnitude faster than conventional integration algorithms, and the building of the Supercomputer Toolkit, another special purpose computer built by Sussman and colleagues.

The symplectic n-body mapping method generalized the mapping method introduced by Wisdom in his 1981 Ph.D. thesis. It is based on the idea that the algorithm can be described by a Hamiltonian, and the relationship of the algorithm to the problem being integrated can be derived using Hamiltonian perturbation theory. Improvements in the method have also been derived through perturbation theory. Though the resulting algorithms are symplectic, they were not motivated by the idea of matching Taylor series by symplectic Lie series ("symplectic integration"). The symplectic n-body mapping method, and variations, are widely used in the study of the long term evolution of planetary systems, and their subsystems (e.g. satellite systems).

The symplectic mapping method was generalized to include rotational dynamics by Jihad Touma, in his Ph.D. thesis with Wisdom. The resulting method was used by Touma and Wisdom in 1993 to show that the evolution of the obliquity (tilt of the spin axis) of Mars is wildly chaotic, varying from 0 to 60 degrees on a multimillion year timescale.

Wisdom has studied the dynamics of numerous other subsystems in the solar system within this Hamiltonian framework and using these methods. These problems include the explanation of the Kirkwood gaps in the asteroid belt (chaotic zones associated with orbital resonances that lead to removal of material in the gap by planet crossing or encounters with the Sun), the delivery of meteorites from the asteroid belt to the Earth, the exploration of satellite resonance dynamics, the stability of the Kuiper belt of comets in the outer solar system, and so on. Wisdom has had particular interest in the origin and evolution of Earth's Moon.

Wisdom has explored numerous other problems apart of solar system dynamics. In 2002, he demonstrated that deformable bodies can "swim" on curved manifolds; they can move without external forces (or "thrust") simply by changing their shape. Application of this idea to an idealized deformable body in curved spacetime demonstrated that one can swim in spacetime. Unfortunately the effect is too small to provide a practical method of space travel!

Jack Wisdom is a member of the National Academy of Science, and the American Academy of Arts and Science. In 1994, he was awarded a MacArthur Fellowship. He won the Urey Prize of the Division of Planetary Science of the American Astronomical Society (AAS), the Warner Prize of the AAS, and the Brouwer Award, the career award of the Division for Dynamical Astronomy of the AAS. He was a Moore Distinguished Scholar at Caltech, a Visiting Miller Professor at UC Berkeley, and a Visiting Meyerhoff Professor at the Weizmann Institute. He is a member of the American Astronomical Society, and in 2020 was named a Legacy Fellow of the AAS.