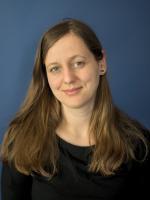 Lennartz is a biogeochemical modeller, in the Follows group, broadly interested in processes that affect elemental cycles on a global scale. Her current focus lies on the role of microbial interactions for the turnover of dissolved organic matter (DOM) in the ocean. DOM constitutes a major carbon reservoir, larger than the terrestrial and marine biomass combined, but the processes leading to its persistence and spatiotemporal distribution remain poorly understood. During her fellowship, she will investigate the drivers of basin-scale DOM patterns as well as general principles of synergistic and antagonistic interactions within microbial communities from a theoretical perspective. To this end, she applies numerical models of varying levels of complexity, ranging from network box models to ocean circulation models.

Lennartz holds a PhD in Marine Biogeochemistry from the University of Kiel/Geomar Helmholtz-Centre for Ocean Research Kiel, as well as an MSc and BSc in Geoecology/Environmental Sciences from TU Braunschweig and University of Tuebingen, Germany.