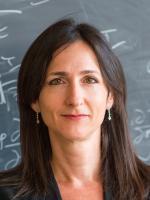 Sara Seager is a planetary scientist and astrophysicist at the Massachusetts Institute of Technology where she is a Professor of Planetary Science, Professor of Physics, Professor of Aerospace Engineering, and holds the Class of 1941 Professor Chair. She has pioneered many research areas of characterizing exoplanets with concepts and methods that now form the foundation of the field of exoplanet atmospheres. Her present research focus is on the search for life by way of exoplanet atmospheric “biosignature” gases. Professor Seager works on space missions for exoplanets including as the PI of the CubeSat ASTERIA, a 6U CubeSat capable of high precision pointing, with the science goal of detecting small transiting exoplanets orbiting bright, sun-like stars. The prototype is intended to be the first of a planned fleet of nanosatellites, aimed to demonstrate the graduated growth of a constellation as a new paradigm for space science missions. In addition to being the PI of ASTERIA, Prof. Seager is the Deputy Science Director of the MIT-led NASA Explorer-class mission TESS; and is a lead of the Starshade Rendezvous Mission concept (a space-based direct imaging exoplanet discovery concept under technology development) to find a true Earth analog orbiting a Sun-like star.

Before joining MIT in 2007, Professor Seager spent four years on the senior research staff at the Carnegie Institution of Washington preceded by three years at the Institute for Advanced Study in Princeton, NJ.

Please see http://www.saraseager.com/papers/ for an up to date list.