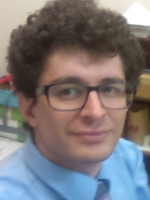 Hamed O.Ghaffari joined Matěj Peč’s research group in June 2017. Hamed finished his PhD from the department of Civil Engineering (University of Toronto, 2014). From 2009 to 2010, he was a research assistant in university of Ottawa (Canada) , studying coupled process (THM) and gas propagation in deep geological repositories. From 2010 to 2015, He involved in Paul Young’s Lab.-University of Toronto- working mainly on ultrasound probes of fractured rocks under different conditions of stress and temperatures, including  micro-mechanisms in true triaxial tests ,rupture mechanism and dynamic loading tests. He was a post-doc (2015-2017) in W.A.Griffith’s Lab (University of Texas) and working on the response of materials under dynamic loading and out-of –equilibrium physics of micro-cracks with excited acoustic signals.

His current research includes study of acoustic phonon emissions to analysis physic s of partly molten rocks and lattice preferred orientations akin to mechanisms in upper mantle and with applications on deep-earthquake faulting.