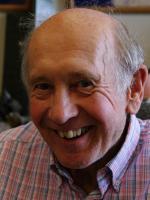 Over a career spanning close to 50 years, the central focus of Frey's work has been to determine the mineralogy and chemical composition of the upper mantle and the processes of partial melting and melt migration and reaction that create heterogeneity in the Earth’s mantle. To achieve this goal two diverse approaches have been used by Frey, students and colleagues: 1- determining the composition and isotopic ratios of:  magmas erupted on the earth’s surface and upper mantle rocks exposed in the Earth's crust as <1 m-size xenoliths in basalt or km-sized massifs such as Ronda in Spain and Horoman in Japan. These rocks originally formed as residues of partial melting, but they are commonly overprinted by interactions with migrating melt.

Complementary research is to establish the geochemical differences between basaltic magmas derived from the mantle in three different tectonic settings; that is Mid ocean-ridge basalts which erupt along diverging spreading ridge axes, e.g., the Mid-Atlantic Ridge; Arc lavas which erupt at subduction zones resulting from converging plates, e.g., the "Ring of Fire" around the Pacific Ocean; and Hotspot magmas which may be intraplate volcanoes, (e.g., Hawaii) or ridge centered (Iceland). Basaltic melt in each of these settings has distinctive geochemical characteristics. Understanding the processes that created these differences is necessary to understand the processes, such as recycling in subduction zones that create heterogeneity in the mantle.

Frey served as an Associate Editor for Geochemica et Cosmochemica Acta and as President of the Volcanology, Geochemistry and Petrology, Section of the American Geophysical Union (2000-2002). An accomplished teacher, Frey taught “Trace Element Geochemistry” and “Analytical Techniques for Geochemical Analysis of Geological and Environmental Samples”.

Frey received his undergraduate degree in Chemical Engineering in 1960 and his doctoral degree in Physical Chemistry in 1967, both from the University of Wisconsin. He joined the MIT faculty in 1966, where he has remained throughout his career.