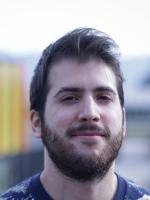 Enrico is strongly interested in frictional processes at all scales, and in particular in the role played by changes in the surface roughness of the sliding bodies. Improving our understanding of frictional processes has wide implications: from potential reductions of energy losses in engineering applications to a better understanding of earthquake physics. In his PhD studies, he used numerical simulations to investigate surface roughness evolution in adhesive wear processes at the nanoscale. In particular, he showed the importance of deformation mechanisms and wear particles in the evolution of the surface geometry to the observed fractal description, and he investigated the interplay of surface roughness, interfacial adhesion, and minimum wear particle size.

Fascinated by the geophysical aspects of friction, in May 2021 he joined Prof. Cattania’s group as a postdoctoral associate on the quest of answering a fundamental question - what is the influence of scale-dependent deformation mechanisms and gouge on the slip response of rough faults?

He obtained his PhD in mechanics in 2020 at the École polytechnique fédérale de Lausanne (EPFL), Switzerland. Before that, he received both his MSc (2014) and BSc (2011) in civil engineering from the University of Padua, Italy.

Enrico is also active in science communication with film. Here his interests lie in creating safe spaces for scientists and filmmakers to tell their science stories (as a lecturer and event organizer), and in making science films (as a filmmaker and scientific advisor).