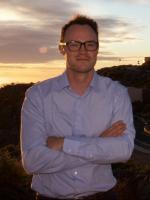 The field of exoplanet transmission spectroscopy can tell us a lot about the characteristics of planets, but of course, there are challenges to overcome to make these sensitive measurements. Ideally, all transit depth variations would result from the exoplanets’ atmospheres, but stars in fact can themselves produce signals that mimic or mask those from exoplanet atmospheres.

In particular, stars’ photospheres or surfaces are not uniform, but instead show blemishes like starspots due to magnetic activity. These introduces a difference between the spectrum of the transit chord illuminating the planet’s atmosphere and the full-disk spectrum of the star, which we observe before and after transits and use as a reference to measure the transit depth. And, in turn, this can introduce apparent spectral features in transmission spectra, which we might mistake for planetary atmospheric features.

This phenomenon is what I call the transit light source effect. It’s been known to be an issue for some transiting exoplanets for more than 10 years, but what I did with my thesis work was systematically investigate the types of signals that can produced by a range of stars. I found that smaller, cooler stars—red dwarfs—which tend to be more active than Sun-like stars, can introduce spectral features that can be confused with planetary features. This is particularly concerning for astrobiology because these are the same types of stars that we would like to focus on to study small, temperate, rocky worlds that might host life.

My research generally focuses on ways to identify these transit depth variations produced by stars and separate them from those produced by exoplanet atmospheres. I do this with both models and observations. I develop simple models of active stars to forecast what signals they will produce during exoplanet transits. I also collect spectroscopic observations of transiting exoplanets with the 6.5-meter Multiple Mirror Telescope (MMT) and Magellan Telescopes. I use those observations to study both the atmospheric properties of the exoplanets and the photospheric properties of the host stars.

I am also involved in Project EDEN, a search for planets that transit nearby red dwarf stars.

The work I will do as a 51 Pegasi b Fellow will address this problem of stars imprinting spectral features in transit depths by refining our understanding of the properties of active stars that host exoplanets.

I’ll do this through a series of observational studies and by developing a new tool for analyzing exoplanet transit observations. I will use large datasets like the Kepler and TESS archives to look for transit crossing events—when a transiting exoplanet passes in front of a magnetic active region (or starspot). This produces a “blip” in the transit light curve that tells us about the size and brightness of the starspot, parameters that govern how they affect transmission spectra. I will also carry out in-depth studies of the most interesting transiting exoplanet host stars using the Magellan Telescopes. TRAPPIST-1, for example, offers amazing opportunities to study temperate, Earth-sized worlds (seven of them!) with current and near-future facilities like the James Webb Space Telescope. But we must characterize the stars better to fully exploit this opportunity.

There’s a very promising technique, called spectral decomposition, which has recently been demonstrated to provide spot spectra and covering fractions for active stars. These are the parameters we need to know for exoplanet transmission spectroscopy as well. This technique requires taking high-resolution spectra of the host stars at a handful of times as well as long-term monitoring of the brightness of the star. The high-resolution spectra tell us the spot covering fractions at specific moments and the long-term brightness monitoring helps us trace the evolution of the spots over time. Together, these data can tell us about the state of the star at the moment of the exoplanet transit, which allows us to separate the different spectral signals. At MIT, I will use the Magellan Telescopes at Las Campanas Observatory to collect the high-resolution stellar spectra and I will collaborate with Prof. Julien de Wit to use the SPECULOOS telescope network to collect the long-term brightness monitoring.