As climate change increases the number of extreme weather events, such as megadroughts, groundwater management is key for sustaining water supply. But current groundwater monitoring tools are either costly or insufficient for deeper aquifers, limiting our ability to monitor and practice sustainable management in populated areas.

Now, a new paper published in Nature Communications bridges seismology and hydrology with a pilot application that uses seismometers as a cost-effective way to monitor and map groundwater fluctuations.

“Our measurements are independent from and complementary to traditional observations,” says Shujuan Mao PhD ’21, lead author on the paper. “It provides a new way to dictate groundwater management and evaluate the impact of human activity on shaping underground hydrologic systems.”

Mao, currently a Thompson Postdoctoral Fellow in the Geophysics department at Stanford University, conducted most of the research during her PhD in MIT’s Department of Earth, Atmospheric and Planetary Sciences (EAPS). Other contributors to the paper include EAPS department chair and Schlumberger Professor of Earth and Planetary Sciences Robert van der Hilst, as well as Michel Campillo and Albanne Lecointre from the Institut des Sciences de la Terre in France.

While there are a few different methods currently used for measuring groundwater, they all come with notable drawbacks. Hydraulic heads, which drill through the ground and into the aquifers, are expensive and can only give limited information at the specific location they’re placed. Noninvasive techniques based on satellite- or airborne-sensing lack the sensitivity and resolution needed to observe deeper depths.

Mao proposes using seismometers, which are instruments used to measure ground vibrations such as the waves produced by earthquakes. They can measure seismic velocity, which is the propagation speed of seismic waves. Seismic velocity measurements are unique to the mechanical state of rocks, or the ways rocks respond to their physical environment, and can tell us a lot about them. 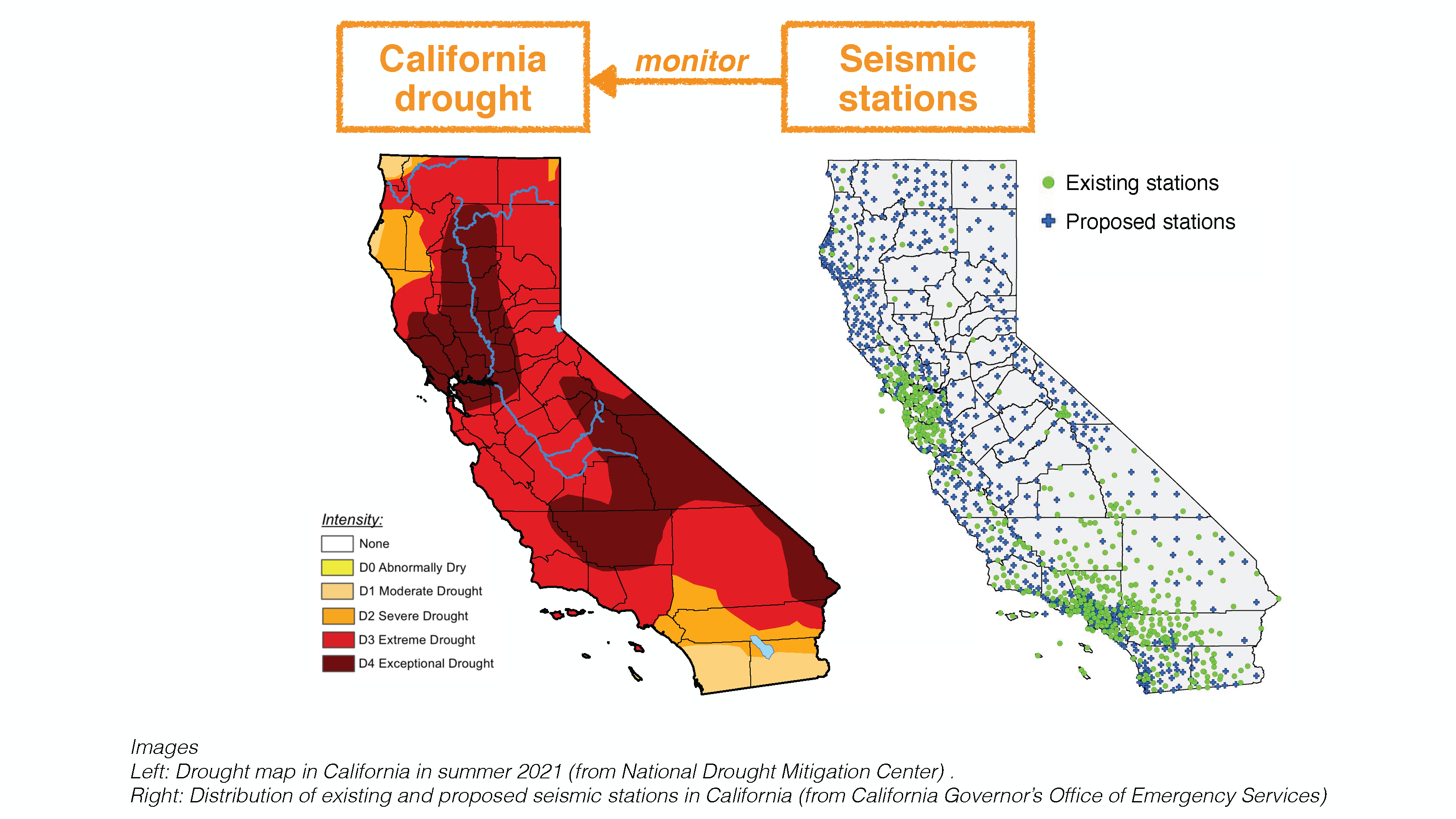 Seismometers are already deployed across California, an area known for earthquakes and seismic activity. Existing stations and proposed ones can help monitor the areas of California suffering the most during the current megadrought. Image courtesy Shujuan Mao.

The idea of using seismic velocity to characterize property changes in rocks has long been used in laboratory-scale analysis, but only recently have scientists been able to measure it continuously in realistic-scale geological settings. For aquifer monitoring, Mao and her team associate the seismic velocity with the hydraulic property, or the water content, in the rocks.

Seismic velocity measurements make use of ambient seismic fields, or background noise, recorded by seismometers. “The Earth’s surface is always vibrating, whether due to ocean waves, winds, or human activities,” she explains. “Most of the time those vibrations are really small and are considered ‘noise’ by traditional seismologists. But in recent years scientists have shown that the continuous noise records in fact contain a wealth of information about the properties and structures of the Earth’s interior.”

To extract useful information from the noise records, Mao and her team used a technique called seismic interferometry, which analyzes wave interference to calculate the seismic velocity of the medium the waves pass through. For their pilot application, Mao and her team applied this analysis to basins in the Metropolitan Los Angeles region, an area suffering from worsening drought and a growing population.

By doing this, Mao and her team were able to see how the aquifers changed physically over time at a high resolution. Their seismic velocity measurements verified measurements taken by hydraulic heads over the last 20 years, and the images matched very well with satellite data. They could also see differences in how the storage areas changed between counties in the area that used different water pumping practices, which is important for developing water management protocol.

Mao also calls using the seismometers a “buy-one get-one free” deal, since seismometers are already in use for earthquake and tectonic studies not just across California, but worldwide, and could help “avoid the expensive cost of drilling and maintaining dedicated groundwater monitoring wells,” she says.

Mao emphasizes that this study is just the beginning of exploring possible applications of seismic noise interferometry in this way. It can be used to monitor other near-surface systems, such as geothermal or volcanic systems, and Mao is currently applying it to oil and gas fields. But in places like California currently experiencing megadroughts, and who rely on groundwater for a large portion of their water needs, this kind of information is key for sustainable water management.

“It's really important, especially now, to characterize these changes in groundwater storage so that we can promote data-informed policymaking to help them thrive under increasing water stress,” she says.

This study was funded, in part, by the European Research Council, with additional support from the Thompson Fellowship at Stanford University.

Story Image: The effects of California’s severe multiyear drought are seen in this pair of images acquired by NASA Terra spacecraft of the area northeast of Madera, in the Sierra Nevada Mountains foothills between Yosemite National Park and the San Joaquin Valley, taken in 2011 (right) and 2014. Images credit: NASA/GSFC/METI/ERSDAC/JAROS, and U.S./Japan ASTER Science Team.