Expanding horizons through astronomy and art

Whether spending late nights at the observatory or working on animated films, senior Skylar Larsen is reaching for the stars.

When it came to picking a major, Skylar Larsen had no doubt in her mind that she wanted to study the stars. 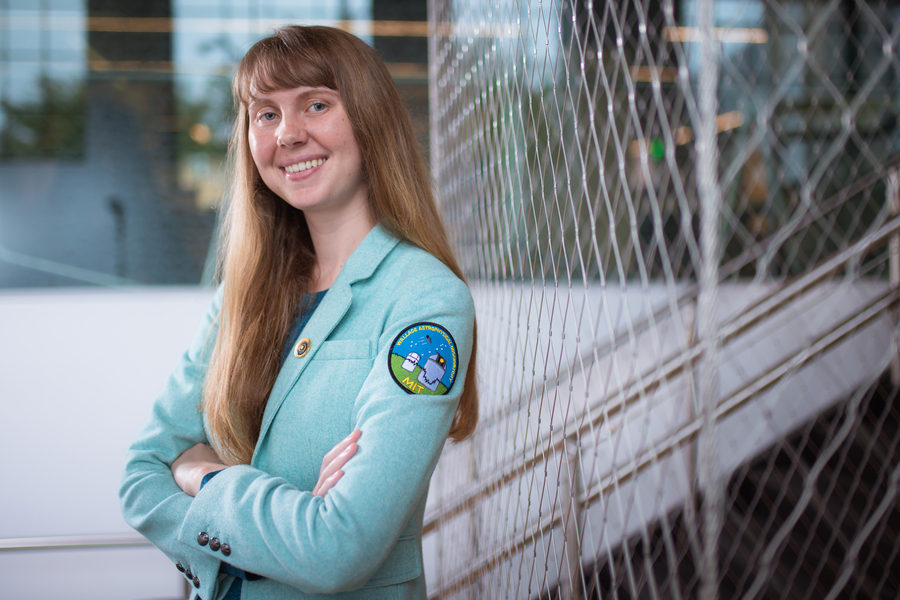 “There was never really an 'aha' moment,” says Larsen. “I always loved staring up into space.”

An opportunity to further explore astronomy came in high school, when Larsen participated in Boyce-Astro, a local outreach organization that aims to expose students to the scientific research process. Through their seminar program, she was able to take data from remote telescopes, write a few papers, and publish them in a journal.

“I can’t believe I got to do that in high school,” Larsen says. “Scientific writing is a really important skill to have, and the fact that early on I was exposed to a program that taught kids these things was huge.”

Larsen considers her time with Boyce-Astro to be the start of her career as an astronomer. She’s returned to mentor other students in the program, passing on not only the skills of observational astronomy but also how to effectively communicate those findings through writing.

Now a senior in the Department of Earth, Atmospheric and Planetary Sciences, Larsen has continued to look toward the stars and enjoy the hands-on coursework that comes with it. One class that stands out is 12.410 (Observational Techniques of Optical Astronomy). As a communication intensive class, it equips students with the skillset needed to write research proposals, take observatory data, and then present that data at conferences. Under normal circumstances, the class requires late nights at the MIT Wallace Astrophysical Observatory, but due to the Covid-19 restrictions Larsen and her classmates were limited to taking data remotely.

Still, she got to experience those late nights at the observatory during an internship the following summer.

“As an astronomer, you’re at the mercy of the weather,” Larsen says, going on to explain that she spent late nights at the observatory three to four times a week as an intern. “You have two options. Either you have a bonked sleep schedule and you’re going to be totally miserable, or you become nocturnal. I tried to do the second one. It turns out I’m slightly bad at that.”

Despite the lack of sleep, Larsen says joyfully, “I’m so glad I got to experience that. I wouldn’t trade it for the world.”

While astronomy was always a passion for Larsen, digital art was something she discovered once she came to college. She’s been an active member of Digital Art and Animation at MIT, or DAAMIT, since her first year and is now the president of the club. In her role she helps to organize weekly hangouts, monthly art challenges, and a yearly anthology of members’ work.

Through her participation in DAAMIT, Larsen had the opportunity to collaborate with MIT music lecturer and composer Elena Ruehr. Ruehr had reached out to the club to commission animated shorts to go with a collection of musical pieces for string quartets she had written. The aim of the project was to merge music and animation to introduce kids to the arts.

Larsen herself wore many hats throughout the project, taking on the role of lead background artist as well as working on the storyboard and character designs. The project started with a team of two, but quickly expand to eight as they realized the true scope of the project.

“In our hubris, we thought we could get a lot more done,” says Larsen, noting that this was the most ambitious animation project she’s ever tackled. “That four-minute-long short film — that took a year to make.”

That four-minute short film goes with the composition’s first movement, “Spider Swing,” and tells the story of a family of insects throwing an increasingly complicated dance party while their frazzled spider butler scrambles to put it all together.

The project is still ongoing — there are five more movements to finish — and is being worked on by other students in the DAAMIT community. All are being funded through the UROP office.

“UROPs don’t have to be in the field of study you’re majoring in,” says Larsen. “It can just be super cool stuff that you really want to do. Not many people can say they’ve completed an animated short film. I can say that!”

Larsen has also taken many classes in the comparative media studies department, studying everything from video game design to the art of making comics. These classes have been an avenue to improve her art, but she also sees them as a chance to make science topics more accessible to a broader audience.

“To say that planetary science is currently booming is a gross understatement. It’s exploding right now,” says Larsen, referring to the launch of the James Webb Space Telescope. “I would love to work with exoplanet data from the JWST, or on the search for extraterrestrial intelligence."

“But I also don’t want it to be all pedantic science. I really love to use my art as a science communicator. Making comics, making videos games — I would love to try and use those mediums to bring science topics to kids.”