MIT-led NASA mission finds a multi-planetary system that could be an “ideal laboratory” to study planetary formation and evolution.

MIT researchers have discovered four new exoplanets orbiting a sun-like star just over 200 light-years from Earth. Because of the diversity of these planets and brightness of their star, this system could be an ideal target for atmospheric characterization with NASA’s upcoming James Webb Space Telescope. Tansu Daylan, a postdoc at the MIT Kavli Institute for Astrophysics and Space Research, led the study published in The Astronomical Journal on Jan. 25.

With further study, says Daylan, this bright star and its many planets could be critical to understanding how planets take shape and evolve. “When it comes to characterizing planetary atmospheres around sun-like stars, this is likely one of the best targets we will ever get,” he says of the results he presented earlier in the month at the 237th meeting of the American Astronomical Society.

Daylan and his colleagues detected these planets with the Transiting Exoplanet Survey Satellite (TESS), an MIT-led NASA mission. To identify exoplanets with TESS, researchers look for changes in the amount of light coming from a star. A small dip in a star’s light could mean that a planet has passed in front of it, blocking some of its light from reaching Earth. By measuring these transits, scientists can approximate the size of a planet, how long it takes to orbit its star, and whether it has other planetary neighbors. Combined with other observation methods, like measuring the gravitational effects a planet has on its host star, researchers can determine if a planet is rocky or gaseous, hot or cold, and even if it has a thick or thin atmosphere.

If light from a distant star passes through the atmosphere of an exoplanet on its way to Earth, certain wavelengths of light will get absorbed by the gases in that atmosphere. When the light reaches Earth, wavelengths of light corresponding to specific gases –– like water, carbon dioxide, or methane –– will be missing, informing scientists of the atmosphere’s composition. This can give astronomers vital information about a planet’s environment, evolution, and habitability. Although TESS can’t characterize atmospheres, the telescope is key in identifying which exoplanets should be prioritized for atmospheric study by other, higher-resolution telescopes like NASA’s Hubble Space Telescope and the James Webb Space Telescope set to launch in fall 2021.

Using data from TESS as well as ground-based telescopes, Daylan determined that this star hosts a large, rocky inner planet, or super-Earth, and three gaseous outer planets just smaller than Neptune, known as sub-Neptunes. Compared to our own solar system, these planets live very close to their sun; their orbits range from 19 days to just under four days. This makes them blazing hot, their average surface temperatures ranging from 700 degrees Fahrenheit to 1,500 F. 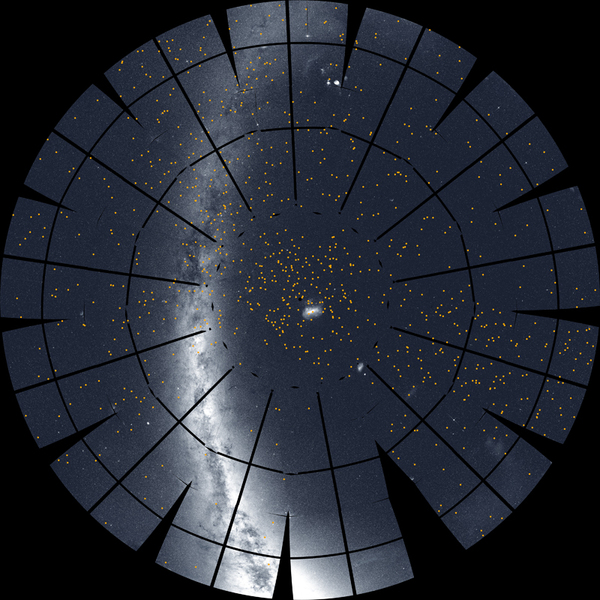 View of the southern night sky, as imaged by TESS Credits: Photo courtesy of NASA/MIT/TESS and Ethan Kruse (USRA).

Although this means the planets are unlikely to host life, it gives astronomers much more data to work with; a short orbit allows for more frequent transits and therefore more opportunities to examine the light passing through its atmosphere. However, there may also be yet undiscovered planets further out in this system, perhaps even in the star’s habitable zone. Recently, another research team used the CHaracterising Exoplanet Satellite (CHEOPS) to confirm a fifth planet, which takes 29 days to orbit the star.

The planets’ host star, TOI-1233, will provide ample light for future study, Daylan says. The star is similar in size and temperature to our own sun, but because it is relatively close to Earth, it appears very bright compared to other stars. From our view, it is the brightest known sun-like star and one of the brightest stars to harbor at least four transiting planets. This is helpful, because a brighter star gives astronomers more light to work with when characterizing its planets.

Stars with many exoplanets are particularly exciting to astronomers, because they open up new avenues for studying solar systems. “With multi-planetary systems, you’re kind of hitting the jackpot,” says Daylan. “The planets originate from the same disk of matter around the same star, but they end up being different planets with different atmospheres and different climates due to their different orbits. So, we would like to understand the fundamental processes of planet formation and evolution using this planetary system, which acts as a controlled experiment.”

TESS is a NASA Astrophysics Explorer mission led and operated by MIT in Cambridge, Massachusetts, and managed by NASA's Goddard Space Flight Center. Additional partners include Northrop Grumman, based in Falls Church, Virginia; NASA’s Ames Research Center in California’s Silicon Valley; the Center for Astrophysics - Harvard and Smithsonian in Cambridge; MIT Lincoln Laboratory; and the Space Telescope Science Institute in Baltimore. More than a dozen universities, research institutes, and observatories worldwide are participants in the mission.

Paper: "TESS discovery of a super-Earth and three sub-Neptunes hosted by the bright, Sun-like star HD 108236"