Climate projections could be off by five years, researchers find.

The ocean’s “biological pump” describes the many marine processes that work to take up carbon dioxide from the atmosphere and transport it deep into the ocean, where it can remain sequestered for centuries. This ocean pump is a powerful regulator of atmospheric carbon dioxide and an essential ingredient in any global climate forecast.

But a new MIT study points to a significant uncertainty in the way the biological pump is represented in climate models today. Researchers found that the “gold standard” equation used to calculate the pump’s strength has a larger margin of error than previously thought, and that predictions of how much atmospheric carbon the ocean will pump down to various depths could be off by 10 to 15 parts per million.

Given that the world is currently emitting carbon dioxide into the atmosphere at an annual rate of about 2.5 parts per million, the team estimates that the new uncertainty translates to about a five-year error in climate target projections.

“This larger error bar might be critical if we want to stay within 1.5 degrees of warming targeted by the Paris Agreement,” says Jonathan Lauderdale, a research scientist in MIT’s Department of Earth, Atmospheric and Planetary Sciences. “If current models predict we have until 2040 to cut carbon emissions, we’re expanding the uncertainty around that, to say maybe we now have until 2035, which could be quite a big deal.”

The marine processes that contribute to the ocean’s biological pump begin with phytoplankton, microscopic organisms that soak up carbon dioxide from the atmosphere as they grow. When they die, phytoplankton collectively sink through the water column as “marine snow,” carrying that carbon with them.

“These particles rain down like white flaky snow that is all this dead stuff falling out of the surface ocean,” Lauderdale says.

At various depths the particles are consumed by microbes, which convert the particles’ organic carbon and respire it into the deep ocean in an inorganic, mineral form, in a process known as remineralization.

In the 1980s, researchers collected marine snow at locations and depths throughout the tropical Pacific. From these observations they generated a simple power law  mathematical relationship — the Martin curve, named after team member John Martin — to describe the strength of the biological pump, and how much carbon the ocean can remineralize and sequester at various depths.

“The Martin curve is ubiquitous, and it’s really the gold standard [used in many climate models today],” Lauderdale says.

But in 2018, Cael and co-author Kelsey Bisson showed that the power law derived to explain the Martin curve was not the only equation that could fit the observations. The power law is a simple mathematical relationship that assumes that particles fall faster with depth. But Cael found that several other mathematical relationships, each based on different mechanisms for how marine snow sinks and is remineralized, could also explain the data.

“He found that you can’t tell which curve is the right one, which is a bit troubling, because each curve has different mechanisms behind it,” Lauderdale says. “In other words, researchers might be using the ‘wrong’ function to predict the strength of the biological pump. These discrepancies could snowball and impact climate projections.” 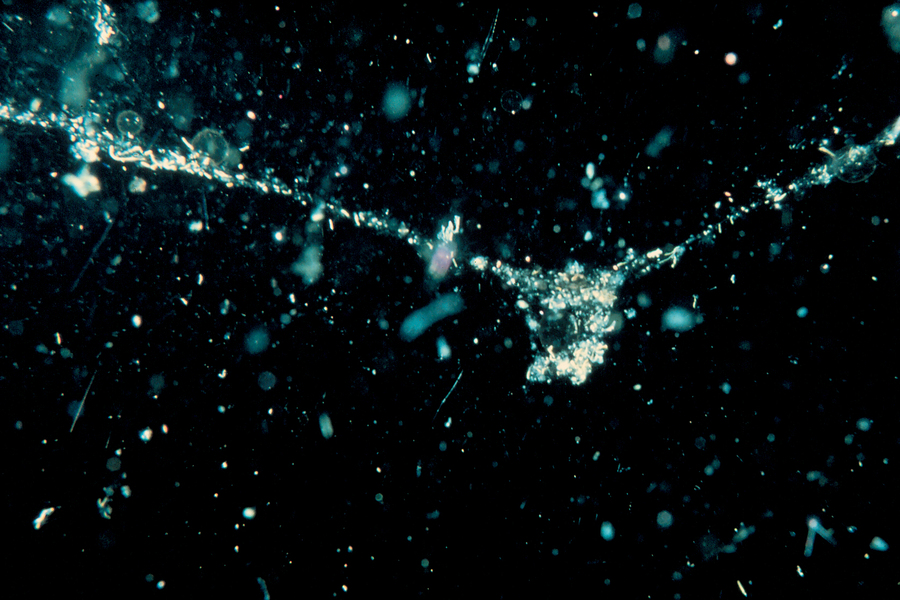 When they die, phytoplankton collectively sink through the water column as “marine snow,” carrying with them the carbon that they initially absorbed. Shown here are white flakes and pellets that typically make up sinking marine material. Credits: © Woods Hole Oceanographic Institution

In the new study, Lauderdale and Cael looked at how much difference it would make to estimates of carbon stored deep in the ocean if they changed the mathematical description of the biological pump.

They started with the same six alternative equations, or remineralization curves, that Cael had previously studied. The team looked at how climate models’ predictions of atmospheric carbon dioxide would change if they were based on any of the six alternatives, versus the Martin curve’s power law.

To make the comparison as statistically similar as possible, they first fit each alternative equation to the Martin curve. The Martin curve describes the how much marine snow reaches various depths through the ocean. The researchers entered the data points from the curve into each alternative equation. They then ran each equation through the MITgcm, a general circulation model that simulates, among other processes, the flux of carbon dioxide between the atmosphere and the ocean.

The team ran the climate model forward in time to see how each alternative equation for the biological pump changed the model’s estimates of carbon dioxide in the atmosphere, compared with the Martin curve’s power law. They found that the amount of carbon that the ocean is able to draw down and sequester from the atmosphere varies widely, depending on which mathematical description for the biological pump they used.

“The surprising part was that even small changes in the amount of remineralization or marine snow making it to different depths due to the different curves can lead to significant changes in atmospheric carbon dioxide,” Lauderdale says.

The results suggest that the ocean’s pumping strength, and the processes that govern how fast marine snow falls, are still an open question.

“We definitely need to make many more measurements of marine snow to break down the mechanisms behind what’s going on,” Lauderdale adds. “Because probably all these processes are relevant, but we really want to know which are driving carbon sequestration.”

This research was supported, in part, by the National Science Foundation, the Simons Collaboration on Computational Biogeochemical Modeling of Marine Ecosystems, and the UK National Environmental Research Council.

An escape route for seafloor methane

Seeding oceans with iron may not impact climate change