Corals have evolved over millennia to live, and even thrive, in waters with few nutrients. In healthy reefs, the water is often exceptionally clear, mainly because corals have found ways to make optimal use of the few resources around them. Any change to these conditions can throw a coral’s health off balance.

Now, researchers at MIT and the Woods Hole Oceanographic Institution (WHOI), in collaboration with oceanographers and marine biologists in Cuba, have identified microbes living within the slimy biofilms of some coral species that may help protect the coral against certain nutrient imbalances.

The team found these microbes can take up and “scrub out” nitrogen from a coral’s surroundings. At low concentrations, nitrogen can be an essential nutrient for corals, providing energy for them to grow. But an overabundance of nitrogen, for instance from the leaching of nitrogen-rich fertilizers into the ocean, can trigger mats of algae to bloom. The algae can outcompete coral for resources, leaving the reefs stressed and bleached of color.

By taking up excess nitrogen, the newly identified microbes may prevent algal competition, thereby serving as tiny protectors of the coral they inhabit. While corals around the world are experiencing widespread stress and bleaching from global warming, it seems that some species have found ways to protect themselves from other, nitrogen-related sources of stress.

“One of the aspects of finding these organisms in association with corals is, there’s a natural way that corals are able to combat anthropogenic influence, at least in terms of nitrogen availability, and that’s a very good thing,” says Andrew Babbin, the Doherty Assistant Professor in Ocean Utilization in MIT’s Department of Earth, Atmospheric and Planetary Sciences. “This could be a very natural way that reefs can protect themselves, at least to some extent.”

Babbin and his colleagues have reported their findings in the the ISME Journal. 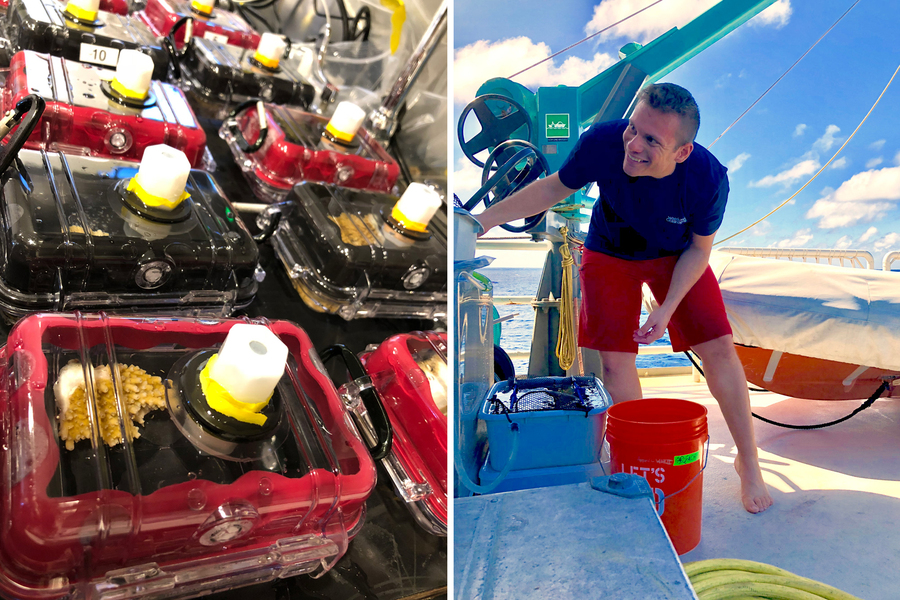 Researchers incubated coral fragments in contained chambers to measure the rates of microbial activity, as seen on the left. MIT professor Andrew Babbin sets up an incubation on the right. Credits: Courtesy of Andrew Babbin

Babbin’s group studies how marine communities in the ocean cycle nitrogen, a key element for life. Nitrogen in the ocean can take various forms, such as ammonia, nitrite, and nitrate. Babbin has been especially interested in studying how nitrogen cycles, or is taken up, in anoxic environments — low-oxygen regions of the ocean, also known as “dead zones,” where fish are rarely found and microbial life can thrive.

“Locations without enough oxygen for fish are where bacteria start doing something different, which is exciting to us,” Babbin says. “For instance, they can start to consume nitrate, which has then an impact on how productive a specific part of the water can be.”

Dead zones are not the only anoxic regions of the ocean where bacteria exhibit nitrogen-feasting behavior. Low-oxygen environments can be found at smaller scales, such as within biofilms, the microbe-rich slime that covers marine surfaces from shipwrecked hulls to coral reefs.

“We have biofilms inside us that allow different anaerobic processes to happen,” Babbin notes. “The same is true of corals, which can generate a ton of mucus, which acts as this retardation barrier for oxygen.”

Despite the fact that corals are close to the surface and within reach of oxygen, Babbin wondered whether coral slime would serve to promote “anoxic pockets,” or concentrated regions of low oxygen, where nitrate-consuming bacteria might thrive.

He broached the idea to WHOI marine microbiologist Amy Apprill, and in 2017, the researchers set off with a science team on a cruise to Cuba, where Apprill had planned a study of corals in the protected national park, Jardines de la Reina, or Gardens of the Queen.

“This protected area is one of the last refuges for healthy Caribbean corals,” Babbin says. “Our hope was to study one of these less impacted areas to get a baseline for what kind of nitrogen cycle dynamics are associated with the corals themselves, which would allow us to understand what an anthropogenic perturbation would do to that system.”

In exploring the reefs, the scientists took small samples from coral species that were abundant in the area. Onboard the ship, they incubated each coral specimen in its own seawater, along with a tracer of nitrogen — a slightly heavier version of the molecules found naturally in seawater.

They brought the samples back to Cambridge and analyzed them with a mass spectrometer to measure how the balance of nitrogen molecules changed over time. Depending on the type of molecule that was consumed or produced in the sample, the researchers could estimate the rate at which nitrogen was reduced and essentially denitrified, or increased through other metabolic processes.

In almost every coral sample, they observed rates of denitrification were higher than most other processes; something on the coral itself was likely taking up the molecule.

The researchers swabbed the surface of each coral and grew the slimy specimens on Petri dishes, which they examined for specific bacteria that are known to metabolize nitrogen. This analysis revealed multiple nitrogen-scrubbing bacteria, which lived in most coral samples.

“Our results would imply that these organisms, living in association with the corals, have a way to clean up the very local environment,” Babbin says. “There are some coral species, like this brain coral Diploria, that exhibit extremely rapid nitrogen cycling and happen to be quite hardy, even through an anthropogenic change, whereas Acropora, which is in rough shape throughout the Caribbean, exhibits very little nitrogen cycling. ”

Whether nitrogen-scrubbing microbes directly contribute to a coral’s health is still unclear. The team’s results are the first evidence of such a connection. Going forward, Babbin plans to explore other parts of the ocean, such as the tropical Pacific, to see whether similar microbes exist on other corals, and to what extent the bacteria help to preserve their hosts. His guess is that their role is similar to the microbes in our own systems.

“The more we look at the human microbiome, the more we realize the organisms that are living in association with us do drive our health,” Babbin says. “The exact same thing is true of coral reefs. It’s the coral microbiome that defines the health of the coral system. And what we’re trying to do is reveal just what metabolisms are part of this microbial network within the coral system.”

This research was supported, in part, by MIT Sea Grant, the Simons Foundation, the MIT Montrym, Ferry, and mTerra funds, and by Bruce Heflinger ’69, SM ’71, PhD ’80.

Study: Ocean source of a greenhouse gas has been underestimated

Understanding the impact of climate change on the ocean

Going local in the "Coral Triangle"

Homing in on stressed coral