Sara Cody | Department of Aeronautics and Astronautics
Friday, May 7, 2021

Perched atop the MIT Cecil and Ida Green Building (Building 54), MIT’s tallest academic building, a large, golf ball-like structure protrudes from the roof, holding its own in the iconic MIT campus skyline. This radar dome — or "radome" for short — is a fiberglass shell that encases a large parabolic dish, shielding it from the elements while allowing radio waves to penetrate. First installed in 1966, it was used initially to pioneer weather radar research. As the years passed and technology evolved, the radome eventually fell out of use for this purpose and was subsequently slated for removal as MIT began a major renovation and capital improvement project for the building. That's when the student-led MIT Radio Society, who had found creative new uses for the radome, sprang into action to save it — and succeeded.

"When we say 'save the radome,' what we set out to accomplish was to preserve a scientific instrument with great potential from demolition and incorporate an in-place renovation of the dish into the overall building renewal project," says Kerri Cahoy, associate professor in MIT's Department of Aeronautics and Astronautics and the Department of Earth, Atmospheric and Planetary Sciences, who serves as the faculty advisor for the MIT Radio Society. 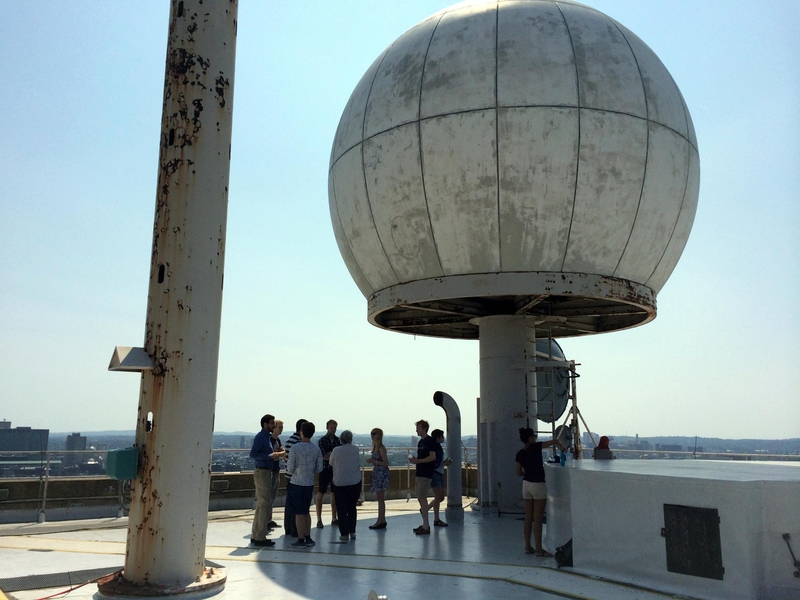 The funds raised by the MIT Radio Society will go toward refurbishing the large radome, including installing a new fiberglass shell to protect it and making structural repairs to its pedestal. The renovation will ensure the preservation of the campus landmark for years to come for use in teaching and research. Credits: Photo courtesy of EAPS News.

The call to action

Starting in the early 1980s, the MIT Radio Society took up residence alongside the radome on the roof of the Green Building, leveraging the highest point on campus accessible to students that provided a manageable, unobstructed laboratory to house equipment like antenna arrays and an FM repeater. In recent years, the Radio Society adapted and upgraded the radome for their microwave experiments, most notably enabling its use for Earth-moon-Earth or "moonbounce" communication, where signals are bounced off the moon to reach Earth-bound receivers at greater distances than radio communications sent on the ground.

"Before the pandemic, we participated in a contest where we used moonbounce to make contact with as many people in as many places as possible to earn points," says Milo Hooper, a senior in mechanical engineering and president of the MIT Radio Society. "We had to get up at 2 a.m. to make sure the moon was in the right position at the right time, and we were able to talk to people in Europe and on the West Coast. As a student, it's amazing to have the opportunity to use a world-class instrument on a college campus. It's unrivaled."

To secure the large dish’s future and replace the deteriorating radome, the MIT Radio Society spearheaded a fundraising effort and immediately got to work. Building on the momentum of a previous successful fundraising campaign among Radio Society alumni that helped refurbish their equipment on the roof, they further mobilized the MIT community of alumni and friends by organizing a second campaign. The students also pulled together a successful grant application in record time to Amateur Radio Digital Communications (ARDC), a non-profit private foundation supporting amateur radio and digital communications science, resulting in ARDC’s largest-ever philanthropic contribution, made in memory of the organization’s founder Brian Kantor. This lead gift brought the MIT Radio Society across the finish line to successfully meet their fundraising goal.

"We were overwhelmed at first by the amount we needed to raise, and the short time we had before the renovation project needed to begin. We just had to hope that someone would see the same promise and potential in the dish that we did,” says Gregory Allen, a PhD student in the MIT Department of Aeronautics and Astronautics who led ARDC grant submission efforts. “When we contacted ARDC, they were so supportive and willing to do whatever it took to make this happen. We're really grateful to them for this incredible gift." 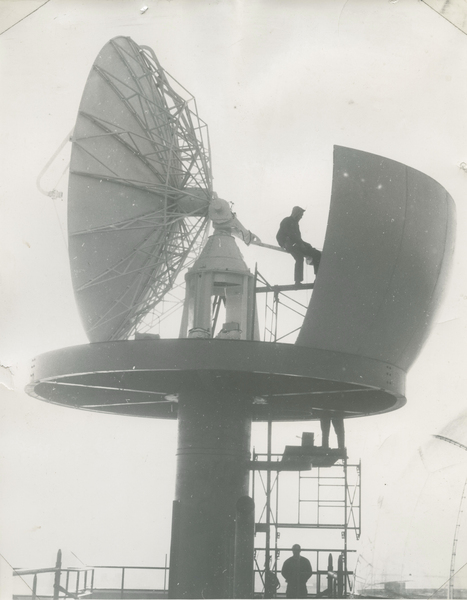 When it comes to satellite communication, the bigger the dish, the further you can send communication signals. The large dish atop the Green Building is 18 feet wide, which is unique because academic institutions don't typically have access to a dish that size without partnering with a commercial provider. The dish rests upon a mount that also boasts a unique feature: Built and used initially for an earlier project to track aircraft movement during World War II, the mount can reposition the dish quickly. This will be particularly useful for tracking satellites in low-Earth orbit that streak across the night sky in less than 10 minutes.

"The dish is really perfect for both low-Earth orbit satellite communications because of the fast-tracking and also for deep space lunar CubeSats because of its large size. Additionally, the surface of the dish is in good shape, so we can use it for communications at relatively high frequencies which allow us to transfer data at higher rates," says Mary Knapp '11, PhD ’18, who is now a research scientist at MIT Haystack Observatory. "Basically, it's ready to be put to use by many of the CubeSat projects in the process of being developed at MIT, and potentially for outside parties as well."

The large radome has also proven to be a valuable asset in the classroom, particularly supporting remote-learning efforts during the Covid-19 pandemic. With the help of the MIT Radio Society, the dish enabled remote radio astronomy experiments for the Physics Junior Laboratory (J-Lab), a foundational course in the physics curriculum. The astronomy experiment typically involves using a small radio telescope to measure how the galaxy rotates from our perspective here on Earth. Instead, students collected "exquisite" high-quality data using the large dish, allowing the class to maintain operations close to normal even while working remotely during the pandemic.

"From my perspective, there are three big shining stars that helped make this happen: the initiative and energy of the students, the support of alumni and the MIT community, and ARDC who saw the potential and the exciting future of this facility and how we can use it to educate future generations and support forward-thinking research on campus," says Cahoy. “We feel grateful that MIT gave us the opportunity to see this through, and appreciate the support, partnership, and guidance we received from the Department of Facilities Campus Construction team who helped us navigate this complex project.”

Story Image: The radar dome, or "radome," perched atop the MIT Cecil and Ida Green Building was saved from demolition by the student-led MIT Radio Society, which had found creative new uses for it, like bouncing radio signals off the moon to communicate over further distances.

Department of Aeronautical and Astronautical Engineering

A major expansion for the Green Building