Read this at Slice of MIT

Although it may not be in the way she envisioned, Elise Myers ’14, SM ’14 has come very close to realizing her childhood dream of becoming a marine biologist. It’s not whales, fish, or sharks she’s studying, but rather small bacteria and microbes that flourish in large bodies of water near urban populations. As a student at MIT, Myers’ subjects were groups of bacteria that she says often looked like little “boogers.”

Myers has always gravitated to water. She grew up near the Inner Harbor in Baltimore County, Maryland, and zoomed down Boston’s Charles River as an undergraduate student on the Women’s Openweight Crew team at MIT. Now, she’s a PhD candidate at Columbia University, where she works on devising mathematical models that will predict how safe the Hudson River is for recreational use. The models may have implications for urban lakes, rivers, and streams everywhere.

Myers’s work is guided by a desire for equity and environmental justice. She graduated from MIT in 2014, having completed enough advanced coursework to earn both an SB and an SM that year in Earth, Atmospheric, and Planetary Sciences. She was also recognized as an MIT Ronald E. McNair Scholar, an award that goes every year to a small number of Black undergraduate students who have excelled academically and contributed to the experience of students on campus from underrepresented groups. McNair earned a physics PhD in 1977 from MIT, going on to become an accomplished astronaut. He died aboard the Challenger space shuttle just nine years later. The award was established in honor of McNair by the Black Alumni/ae of MIT (BAMIT).

“I was really humbled and just so appreciative that someone saw all of the things that I was doing and nominated me for the award,” Myers says. “Sometimes we’re stressed. Sometimes we’re really overworked. But I’m glad that someone could see that I was trying to do everything I could with kindness and with equality at the center of it.” 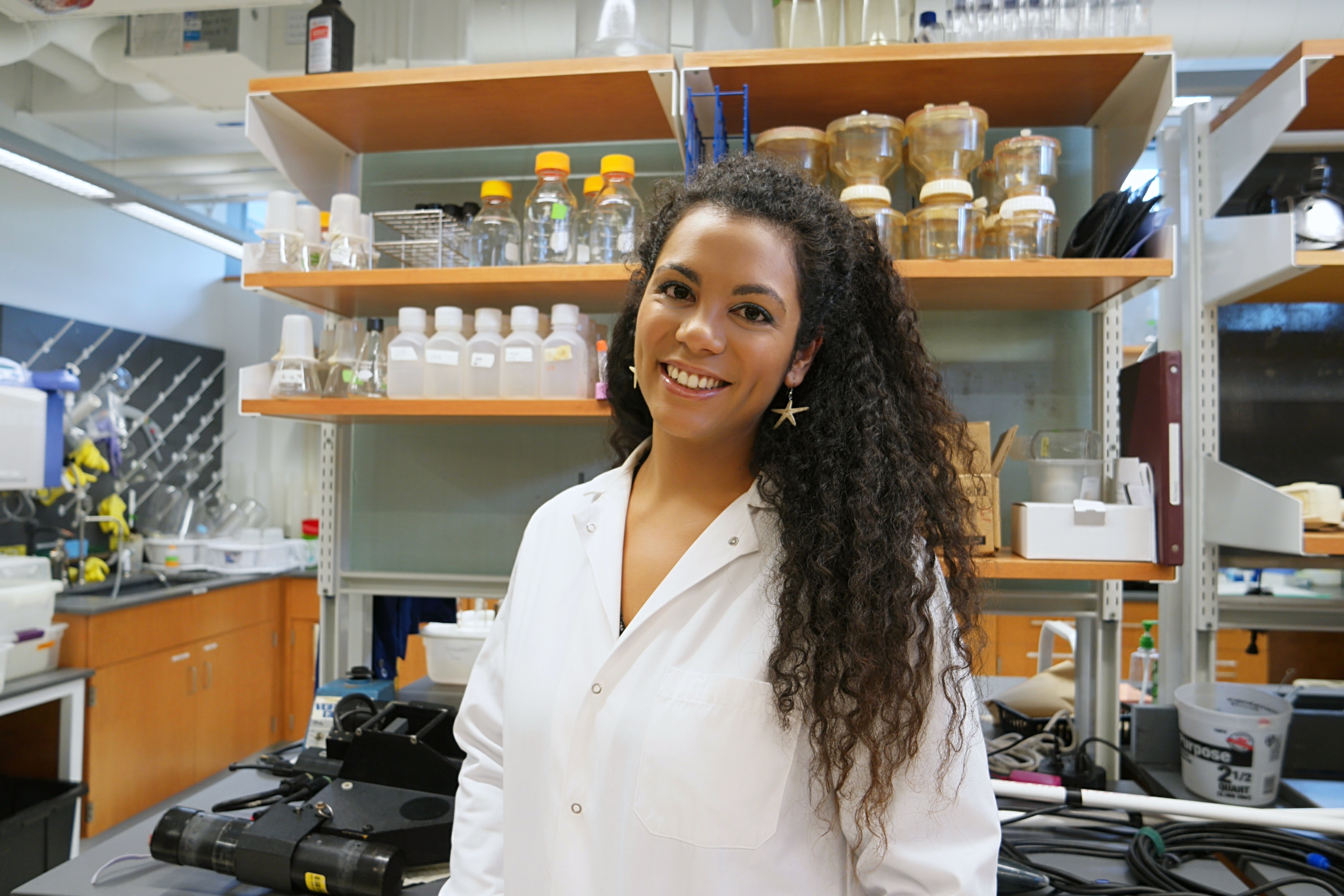 Diversity, inclusion, and wellness at MIT

“I have been involved in diversity, equity, inclusion, justice—that kind of stuff—for a long time,” Myers says. “It actually started at MIT, pretty much right when I got there.”

Myers says she was drawn to MIT for its quirky, passionate, and brilliant mix of people. Through the Office of Minority Education (OME)—which offers students from underrepresented groups services in areas including mentorship, tutoring, and professional development—she immediately found a tight-knit, supportive community on campus that she says was critical to her success. OME “invested so much in me to make sure that I would succeed at MIT and beyond,” she says.

“Elise connected to the office very, very early on in her experience,” says DiOnetta Jones Crayton, associate dean and director of OME. “She came in extremely motivated to take advantage of all the resources—but what I remember about her the most is her willingness to give back to the community.” For example, Myers worked as a chemistry tutor for other undergraduates, running office hours and review sessions in the OME’s Talented Scholars Resource Room (TSR^2).

“She was and is very focused on diversity, equity, and inclusion, and she was always thinking about how MIT can better serve students in that regard,” Crayton says.

Myers also promoted student health and well-being on campus as a part of MIT MedLinks, an organization that provides communication between MIT’s students and medical center and supports student mental, physical, and emotional health. During her last year on campus, she was the organization’s president. “That’s been another piece that I’ve folded into my work. It’s not just been research on environmental science, but it’s also been on public health and well-being,” she says.

Marine biology at a micro level

If you woke up one day and decided you wanted to go jet-skiing or swimming in the Hudson River that afternoon, no one could tell you if it would be safe or not. Right now, scientists gauge if a given body of water is safe for human contact by collecting a water sample, growing the bacteria using specific chemical media, counting the bacteria the next day, and then determining whether the bacterial concentration had been low enough for human recreation at the time of collection. That means you could only know after the fact whether you have already swallowed water containing dangerous levels of bacteria. Myers says the Hudson is safe to swim in approximately 80 percent of the time, from a biological standpoint. Columbia’s Lamont-Doherty Earth Observatory, where Myers works, usually recommends people wait a few days following a rainstorm.

At Columbia, Myers is working to make models that could determine in advance the likelihood that the water will be safe for recreational use. “The goal is: How can we predict the concentrations of those bacteria within a certain range?” Myers says. “So we can say, ‘On this day it might not be a good idea to swim.’ Then, we could check it the next day to make sure we were right or see how far off we were.”

Myers’s work in marine microbiology began at MIT, where she studied microbial mats—bundles of bacteria that, from the outside, look like a “mucousy, sedimenty, little blob.” Despite their appearance, Myers says each mat is a “complex ecosystem.”

Microbial mats form from collections of tiny little organisms, usually on wet surfaces. Different types of bacteria flourish in different conditions. Some thrive best directly on certain types of rock, some in soil, some in water. A sort of gradient forms within the microbial mat, sometimes with distinct layers containing bacterial communities best suited to that particular location. Modern microbial mats, found in streams, estuaries, and lakes all over the world, are believed to be similar to the first forms of microbial communities on Earth.

After graduating from MIT, Myers began work at Princeton, studying more closely how each layer of a microbial mat might interact with those around it: what waste products each layer produces, if the colony could support more microbes, and what substances are exchanged among layers.

She became interested in not only documenting these interactions but mathematically modeling them: “Can I write an equation that basically says: This group exchanges this much of x to this one, and then this one exchanges that back?”

That led Myers to the field of theoretical ecology, laying the groundwork for her current research at Columbia. She gathers samples from the Hudson River and tests different types of sewage-derived bacteria to see how they respond to changes in such environmental factors as sunlight, salinity, and temperature. “After I figure out all of those different factors, I put that into a model. If I have a discharge of sewage into a river body, what’s going to happen to those bacteria? Where are they going to go? How fast are they going to die? How long can people not swim after the discharge?”

Covid-19: A new front in the fight against inequity

Myers’s goal is to make interaction with the Hudson River as safe as possible for all New Yorkers. Too often, she says, low-income communities of color are subject to environmental racism through increased levels of pollution. Environmental exposures, combined with inequality in social factors like decreased access to healthy food options and green spaces, can lower baseline health for affected groups, making them more vulnerable to serious disease.

When Covid-19 hit last March, Myers immediately started to think about how existing inequities might be exacerbated. Advice to stay home and limit contact with others, she knew, would be impossible for those with hands-on jobs that can’t be done remotely, or for people in crowded living situations or multigenerational homes.

“I really wanted to be involved in something that would put a spotlight on these communities that too often have been completely neglected,” Myers says.

Using her skills in data analysis, Myers began studying the disproportionate effects of Covid-19 on minorities and low-socioeconomic-status groups, focusing on preexisting health conditions and lowered baseline health in those groups. She has gathered the work into a preliminary report and is working with colleagues on a New York City–focused study. She was featured by the New Yorker last year in a collection of portraits of scientists continuing their research during the pandemic.

Myers says she’ll keep fighting for equity through her science, as well as supporting other early-career scientists from underrepresented groups. She is a cochair of the Students of Color Alliance at Columbia, volunteers at science education programs and events throughout the city, and frequently posts on Twitter about her experiences as a woman of color in STEM.

“I think it’s helpful that we have many more scientists of color—not nearly enough, but we have more of us,” she says. “For me, when thinking about Covid-19, inequity was my first thought.”

Story Image: Elise Myers ’14, SM ’14 is researching the behavior of bacteria to predict whether water will be safe for recreational use. She is also using her skills in data analysis, to study the disproportionate effects of Covid-19 on minorities and low-socioeconomic-status groups.