Reductions in CFC-11 emissions put ozone recovery back on track

A potent ozone-depleting chemical whose emissions unexpectedly spiked in recent years has quickly dropped back to much lower levels, putting the recovery of the stratospheric ozone layer back on track, according to a new study by scientists at MIT, the University of Bristol, and other institutions in South Korea, the U.S., Japan, Australia, and Switzerland.

The chemical in question is CFC-11, a chlorofluorocarbon that was once commonly used for refrigeration, insulation, and other purposes. When emitted to the atmosphere, CFC-11 can loft into the stratosphere, where the sun’s ultraviolet radiation breaks the chemical down to release chlorine — a noxious chemical that then eats away at ozone, stripping away the Earth’s natural shield against UV rays.

CFC-11 and other chlorofluorocarbons are now banned under the Montreal Protocol, an international treaty under which every country agreed to phase out the chemicals’ production and use by 2010. But in 2018, a team of scientists reported a concerning spike in global emissions of the chemical beginning in 2013.  In 2019, a second team reported that a significant portion of the emissions could be traced to eastern China, predominately the Shandong and Hebie provinces.

Now, in two papers published today in Nature, the same teams report that global annual emissions of CFC-11 into the atmosphere have declined sharply, by about 20,000 U.S. tons, from 2018 to 2019. The researchers traced a substantial fraction of the global emission reductions to the very same regions of eastern China where they had previously reported the original spike. The results are consistent with evidence that the country has taken successful actions to stamp out illegal production of this ozone-depleting chemical.

“This is tremendously encouraging,” says Ronald Prinn, the director of the Center for Global Change Science at MIT and a co-author on both papers. “If emissions of CFC-11 had continued to rise or even just leveled off, there would have been a much bigger problem building up. The global monitoring networks really caught this spike in time, and subsequent actions have lowered emissions before they became a real threat to recovery of the ozone layer.”

A brief history of the spike

Both the original spike and subsequent drop in CFC-11 emissions were detected by the researchers using two independent networks.

One is a global monitoring network operated by the National Oceanographic and Atmospheric Administration (NOAA), comprising about 30 stations. Researchers at each site collect air samples and send them to a central laboratory, where the air is analyzed for CFC-11 and many other trace gases. The weekly measurements, from sites around the world, give an accurate average picture of the chemical species circulating in the global atmosphere.

The other network is the Advanced Global Atmospheric Gases Experiment, or AGAGE, an MIT-led effort funded in part by NASA, with more than a dozen monitoring stations situated on coastal and mountain sites around the world. The AGAGE stations take automated on-site measurements of passing air parcels about every hour, monitoring for more than 50 trace gases, including CFC-11, to provide detailed records of the regional and global atmosphere.

In a 2018 Nature report, the researchers analyzed measurements from NOAA and observed that, from 2014 to 2016, global emissions of CFC-11 grew by more than 14,000 U.S. tons a year — a 25 percent increase from emissions between 2002 and 2012. In a subsequent 2019 Nature report, regional measurements taken by AGAGE stations in Hateruma, Japan, and Gosan, South Korea, along with three-dimensional modeling, showed that about half or more of these emissions came from eastern China, primarily from the factory-heavy Shandong and Hebei provinces.

Following these 2018 and 2019 reports, the scientists continued to track the chemical through the atmosphere, at both global and regional levels.

In the first of the two new Nature papers, they analyze both NOAA and AGAGE global data and report a dramatic turnaround: From 2018 to 2019, CFC-11 annual emissions dropped throughout the global atmosphere by about U.S. 20,000 tons, returning to levels prior to 2012, following the chemical’s 2010 global phaseout.

In the second paper, based on AGAGE measurements, the scientists observed that CFC-11 emissions specifically from eastern China hit a peak around 2017. At some point soon afterward, levels began to drop, although the researchers cannot say exactly when the regional turnaround occurred, as the South Korean station sustained typhoon-related damage that resulted in some data gaps. Despite these gaps, the group observed a decline in CFC-11 annual emissions, by about 11,000 U.S. tons from eastern China, through 2019.

As the researchers write in the paper, “it seems that any substantial delay in ozone-layer recovery has been avoided, perhaps owing to timely reporting, and subsequent action by industry and government in China.” 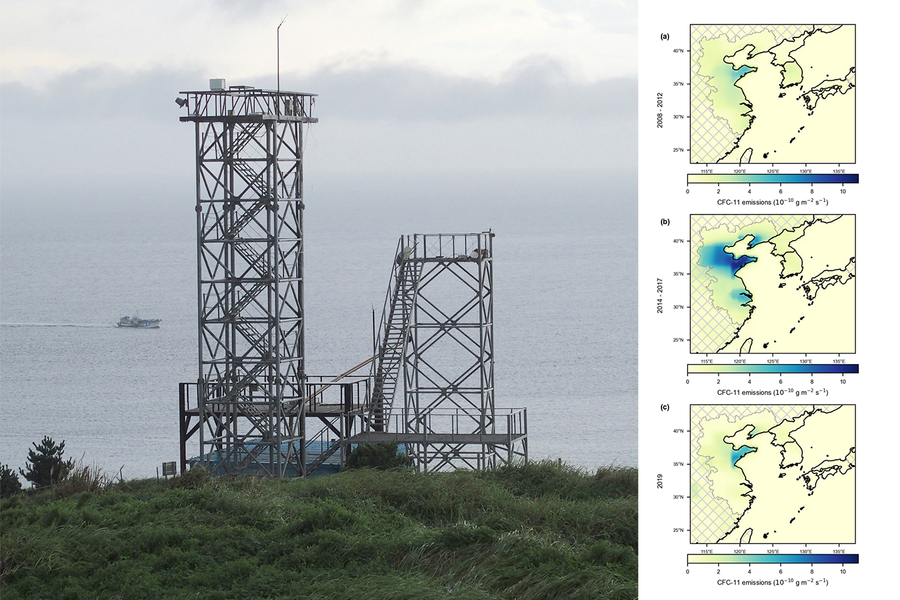 Shown left, a photo of the sampling tower at the AGAGE Gosan station, taken as a typhoon was approaching in September 2019. The view looks offshore toward China in the west. Maps of CFC-11 emissions (shown in right panels) captured by AGAGE stations, which hit a peak in middle period from 2014 to 2017 before dropping back down to expected levels. Credit: Courtesy of the researchers/AGAGE

However, there is still work to be done. While it appears that CFC-11 emissions from eastern China have declined, indicating that significant illegal production of the chemical there has ceased, these emissions only account for roughly half of the global emissions. Where the remainder could have come from is still unknown.

In general, CFC-11 is currently emitted in large amounts through leakages during new production and during subsequent use in refrigeration and manufacture of foams. The chemicals can also leak out from “banks” of old, discarded refrigerators and foams, though at a much slower and more diffuse rate than the rapid regional increase observed in 2013.

“The challenge now is to ask, where’s the rest of it coming from?” says Prinn, the  TEPCO Professor of Atmospheric Science in MIT’s Department of Earth, Atmospheric and Planetary Sciences. “We will need to expand measurements and modeling to identify new sources, and continue to keep watch. Hopefully, emission levels will continue to drop.”

Going forward, the scientists hope to add more stations to the AGAGE network, so that they might identify and quantify other regional sources of CFC-11, particularly in rapidly industrializing parts of the world.

“Clearly this story shows that, in order to ensure that countries are adhering to international agreements like the Montreal Protocol, continuous vigilance is required,” Prinn says. “You can’t stop measuring these chemical species and assume the problem is solved.”

This research was supported, in part, by NASA and NOAA.

Story Image: An aerial view of the Gosan Observatory, including the AGAGE station in Gosan, South Korea (lower left), which takes hourly measurements of more than 50 trace gases, including CFC-11. Credit: KMA/NIMS

Joint Program on the Science and Policy of Global Change

Monitoring the atmosphere, changing the world