Learning the lay of the land

MIT’s Surface Processes group examines how physical factors like river networks and climate slowly shape the landscapes of Earth and other celestial bodies.

A computer-generated model of a round lake appears in the Zoom window as PhD student Rose Palermo shares her screen. It’s a barebones graphic – a ragged yellow coastline punctuated by blue rivers that radiate outward, diminishing in width as they go. Palermo is modeling different scenarios to see how erosion affects the shape of the shoreline in a hypothetical lake on Titan, Saturn’s largest moon.

“So you’re proposing the lake hasn’t been filled with liquid long enough for waves to smooth out the coastline?” asks Maya Stokes, another PhD student. “How do you separate that from river incision introducing more ruggedness?”

Stokes absently presses the tip of her nose down with a finger as she listens to Palermo’s response. She and Palermo are two of about a dozen digital faces framed by familiar little boxes, all gathered on Zoom to discuss research updates in their weekly group meeting.

The MIT Surface Processes research group covers a lot of ground – literally. Headed by professor of geology Taylor Perron in MIT’s Department of Earth, Atmospheric and Planetary Sciences (EAPS), the group examines how physical factors like river networks and climate slowly shape the landscapes of Earth and other celestial bodies.

This EAPS group itself consists of three postdoctoral researchers, six graduate students (two in the MIT-WHOI Joint Program), and a number of close collaborators from other research groups at MIT. As a result, the group’s research scope is broad – everything from floodplains in South America to the coastlines of Titan – and incorporates elements of other disciplines, including archaeology and ecology. But the common thread, Perron says, is “landforms and especially rivers.”

Rivers are the movers and shakers on a planetary surface. Their flowing waters cut into the earth, picking up soil and rocks and carrying them away. These sediments build up other parts of the landscape when they are eventually deposited somewhere downstream. Meanwhile, upstream, the river cuts deeper and deeper into the ground, creating steep banks that lead the surrounding soils to tumble downhill in landslides. The rate of this erosion varies by location. But over geologic timescales, rivers are ultimately responsible for lowering the level of the entire surrounding landscape.

These changes are a challenge to study – not just because they happen so slowly, but also because the landscapes themselves are so vast. “You can’t do controlled experiments at the planetary scale,” says Perron. Scaling everything down to run experiments in a lab often isn’t an option – shrinking sand grains to one-tenth or one-hundredth of their normal size, for example, would yield very fine particles with different physical properties than the sand at the bottom of a life-size river.

Computer modeling is one way the Surface Processes group gets around these difficulties of scale. But the group’s breadth of focus makes it possible to use another strategy as well: observing multiple systems at once. Group members like Palermo, who focus on the landscapes of planetary bodies like Titan and Mars, are studying similar – but not quite parallel – systems to those on Earth.

Titan’s rivers of liquid methane, for example, don’t behave exactly like Earth’s more familiar waterways; for one thing, it’s likely easier for them to carry their loads of icy and organic sediment than it is for rivers on Earth to carry rocks and dirt. But the laws of physics still apply, and comparing the similarities and differences between systems on Earth and systems on other celestial bodies helps further our understanding of both.

“We think about the planetary situations as natural experiments that can help teach us about mechanisms that are happening here,” says Perron. 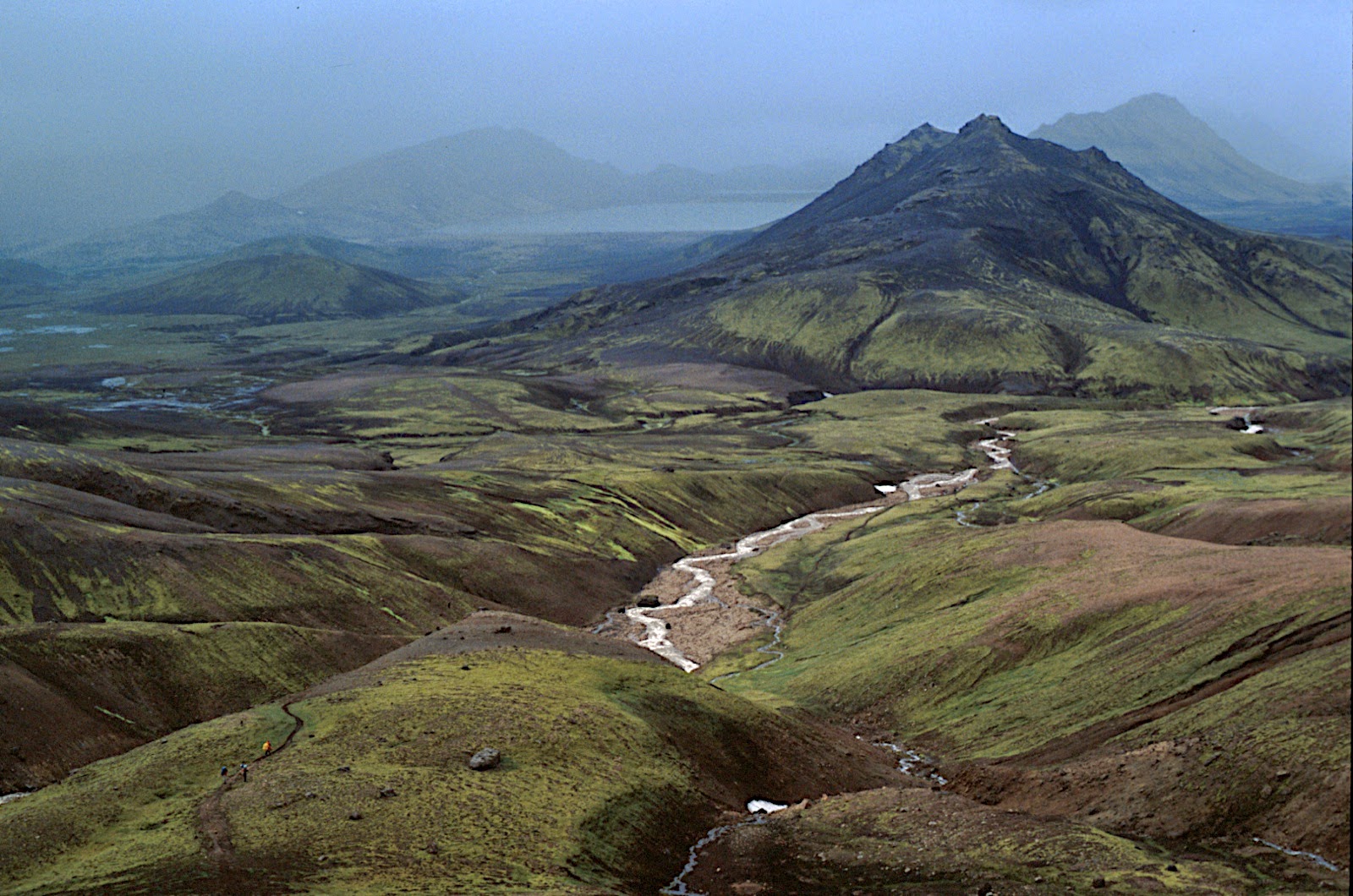 A treeless landscape and the Grashagakvisl River in southern Iceland. Credit: Taylor Perron

Down on Earth, river networks are not just dynamic players that link a hydrologic cycle with a physical landscape. They’re also connected to a larger, living environment – and in the past few years, the Surface Processes group has been spending more time investigating these unique connections.

Stokes’s research, for example, is centered on how river patterns in the southern and central Appalachian Mountains have changed over time. But she’s looking at it in a larger context: how the physical landscape connects to biological diversity. The Upper Tennessee River Basin has more freshwater fish species than all of Europe, and Stokes has teamed up with fish biologists to try to connect the historical dots between a perpetually changing mountain landscape and the startling amount of biodiversity among the fish that evolved to live there.

Her current focus is the Greenfin Darter (Nothonotus chlorobranchius), a slender brownish-green fish living in sections of rivers that flow through metamorphic rock. In the present day, multiple populations of this fish species are isolated from one another by long stretches of river that pass through a different type of rock, a habitat these fish don’t use. But genetic profiles of these fish show that at some point in the past, their populations overlapped.

Coupling this biological information with data on the area’s geology, Stokes is working to identify the past river patterns and landscape shapes that would have physically connected sections of metamorphic rock in the right places and at the right times to match up with the genetic history of these now-distinct fish populations.

Her efforts both illuminate the history of a changing landscape and show how the landscape itself can cause evolution – splitting fish populations into separate groups which then evolve in slightly different ways until eventually they become separate species. This holistic approach has the potential to aid conservation efforts in the present day. “In order to conserve [Earth’s] biodiversity, it is essential that we understand where it came from,” says Stokes.

Navigating multiple research spheres isn’t always easy. “Sometimes you're talking about the same thing, but you're actually talking about separate things,” says Stokes with a smile, regarding collaborations with both geologists and biologists. Nonetheless, the collaborative spirit of her work is echoed throughout the Surface Processes group.

Building off her Appalachian river research, Stokes recently co-wrote a paper with another of the group’s PhD students, Sam Goldberg, about how the Amazon River is “stealing” water from the nearby Rio Orinoco. Goldberg, who focuses on how climate has shaped the Amazon basin, in turn collaborates closely with postdoctoral researcher Morgan Schmidt, the group’s resident archaeologist who specializes in the Amazon region. Schmidt studies the carbon-rich soil associated with riverside indigenous settlements – another link between rivers and the living environment.

These Earth-bound research efforts intertwine with insights from those group members focused on the heavens, with each project complementing the others. Nowadays, that synthesis of ideas happens mostly over Zoom – but that doesn’t hamper the synergy of this group.

“You always want to be learning as a scientist,” says Stokes. “I'm excited just to constantly be learning about new and different things.”

This research was supported, in part, by the Martin Family Society of Fellows for Sustainability, the mTerra Catalyst Fund, the MIT Abdul Latif Jameel Water & Food Systems Lab, NASA, and the National Science Foundation.