Read this at Slice of MIT

Famous for its friendly people and tropical setting, Fiji—the South Pacific nation made up of more than 300 islands—is usually a hub for relaxation and adventure. But for Dean Roemmich PhD ’80, it was the inspiration for an influential career in oceanography.

In his pre-MIT days as a Peace Corps volunteer, Roemmich was teaching physics classes at the University of the South Pacific in Suva, Fiji’s capital, when he had the chance to visit the local surroundings with an eye toward science. “We had a little boat to [explore] around the lagoon and a bunch of sampling gear that [an oceanographer] left. That experience showed me that there are lots of places where you can find interesting data,” says Roemmich.

Inspired by his experimentation in Fiji, Roemmich enrolled in a doctoral program at MIT’s Department of Earth, Atmospheric, and Planetary Sciences in partnership with the Woods Hole Oceanographic Institution (WHOI). Spending most of his MIT days at WHOI on Cape Cod, he studied under Carl Wunsch ’62, PhD ’67, now MIT professor emeritus of physical oceanography. “I was exposed to all sorts of different perspectives on oceanography, but I think what stuck with me through the years was learning to appreciate the value of the systematic collection of data,” explains the co-developer of the concept and first chair of the team behind the deployment of Argo, a global network of floating robotic instruments.

The cohort of nearly 4,000 autonomous floats—overseen by the international Argo steering team and data management team, made up of experts and scientific leaders from around the globe—covers all of the world’s oceans. The floats monitor temperature and salinity as they travel—drifting with the currents and periodically dropping to 2,000 meters below the surface. Argo floats were first deployed in the US in 2000 to better understand the ocean’s roles in the climate system.

“More than 90 percent of the heat that’s stored in the climate system is in the ocean, so just by measuring ocean temperature down through the water column you can make a very good estimate of the heat gain of the total climate system,” explains Roemmich, retired professor of climate, atmospheric science, and physical oceanography at UC San Diego’s Scripps Institution of Oceanography. “The Argo array has shown very convincingly that the oceans, and therefore the climate system, are warming steadily, and are warming at an ever-increasing rate.” 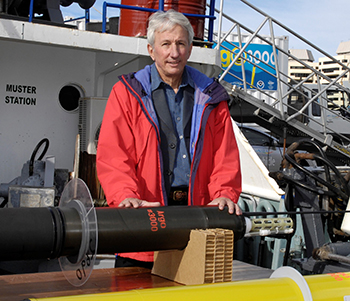 In addition to evidence of warming oceans, the floats have provided significant insights through salinity measurements. “The fresher parts of the oceans are getting fresher, and the salty parts of the ocean are getting saltier.” Researchers have concluded from this that the Earth’s hydrologic cycle, the process by which water moves through states of liquid, vapor, and ice, has sped up by 5 to 7 percent over the past decade. Roemmich hopes that better understanding the oceans’ role in Earth’s climate can provide improved estimates of how the climate will change in the years to come through more accurate prediction modeling.

As of 2020, Argo was collecting roughly 400 data profiles each day, with measurements filtered through rigorous quality checks at regional data centers before being shared on global data centers, where they are available to the public. The free access has resulted in wide usage and more than 4,000 scientific publications using Argo data. The next task for Argo floats, he says, will be to explore the deeper waters that make up roughly half the volume of the world’s oceans, using an enhanced menu of sensors and measurement capabilities.

“We've now developed floats that go to 6,000 meters”—nearly 20,000 feet—“below sea level, and about 150 of those have been deployed so far, but we’d like to extend that deep ocean sampling to a global array as well as the upper ocean global array,” Roemmich says of the team’s newest devices, which will also measure oxygen, pH, nitrate, and bio-optical properties (which include chlorophyll concentration, suspended particles, and radiation transmitted through the air-water interface).

Producing the data that can help inform climate action has been rewarding, says Roemmich, but none of it would be possible without the collaboration of scientists from all over the world—the aspect he finds most impressive. “We have scientists from about 30 different nations who come together with a single objective. In this day and age, it’s an unusual thing to see that degree of collaboration. None of us are getting rich or famous because of this. It’s really all done for the sake of learning about the oceans.”