Nearly one quarter of the land in the Northern Hemisphere, amounting to some 9 million square miles, is layered with permafrost — soil, sediment, and rocks that are frozen solid for years at a time. Vast stretches of permafrost can be found in Alaska, Siberia, and the Canadian Arctic, where persistently freezing temperatures have kept carbon, in the form of decayed bits of plants and animals, locked in the ground.

Scientists estimate that more than 1,400 gigatons of carbon is trapped in the Earth’s permafrost. As global temperatures climb, and permafrost thaws, this frozen reservoir could potentially escape into the atmosphere as carbon dioxide and methane, significantly amplifying climate change. However, little is known about permafrost’s stability, today or in the past. 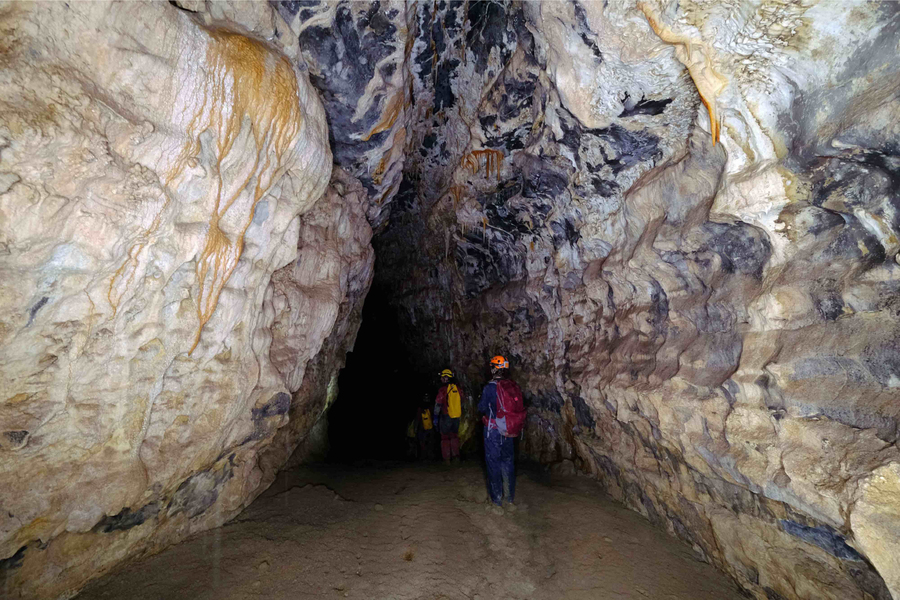 The researchers analyzed cave deposits in locations across western Canada and found evidence that, between 1.5 million and 400,000 years ago, permafrost was prone to thawing, even in high Arctic latitudes. Credits: Courtesy of the researchers

Now geologists at MIT, Boston College, and elsewhere have reconstructed permafrost’s history over the last 1.5 million years. The researchers analyzed cave deposits in locations across western Canada and found evidence that, between 1.5 million and 400,000 years ago, permafrost was prone to thawing, even in high Arctic latitudes. Since then, however, permafrost thaw has been limited to sub-Arctic regions.

The results, published today in Science Advances, suggest that the planet’s permafrost shifted to a more stable state in the last 400,000 years, and has been less susceptible to thawing since then. In this more stable state, permafrost likely has retained much of the carbon that it has built up during this time, having little opportunity to gradually release it.

“The stability of the last 400,000 years may actually work against us, in that it has allowed carbon to steadily accumulate in permafrost over this time. Melting now might lead to substantially greater releases of carbon to the atmosphere than in the past,” says study co-author David McGee, associate professor in MIT’s Department of Earth, Atmospheric, and Planetary Sciences. 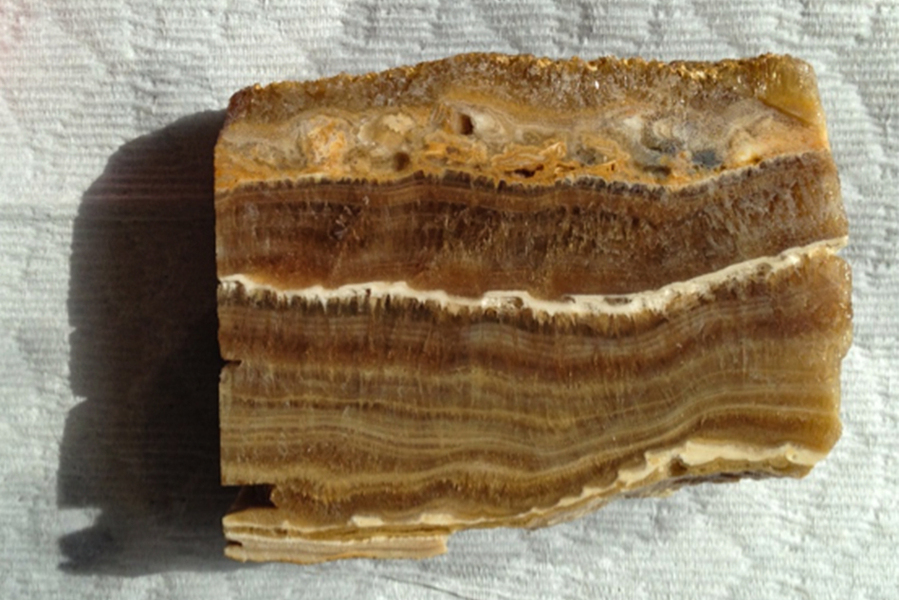 In total, the team obtained 74 samples of speleothems, or sections of stalagmites, stalactites, and flowstones, from at least five caves in each region, representing various cave depths, geometries, and glacial histories. Credits: Courtesy of the researchers

Periods of past warming are considered interglacial periods, or times between global ice ages. These geologically brief windows can warm permafrost enough to thaw. Signs of ancient permafrost thaw can be seen in stalagmites and other mineral deposits left behind as water moves through the ground and into caves. These caves, particularly at high Arctic latitudes, are often remote and difficult to access, and as a result, there has been little known about the history of permafrost, and its past stability in warming climates.

However, in 2013, researchers at Oxford University were able to sample cave deposits from a few locations across Siberia; their analysis suggested that permafrost thaw was widespread throughout Siberia prior to 400,000 years ago. Since then, the results showed a much-reduced range of permafrost thaw.

Shakun and Biller-Celander wondered whether the trend toward a more stable permafrost was a global one, and looked to carry out similar studies in Canada to reconstruct the permafrost history there. They linked up with pioneering cave scientists Lauriol and Ford, who provided samples of cave deposits that they collected over the years from three distinct permafrost regions: the southern Canadian Rockies, Nahanni National Park in the Northwest Territories, and the northern Yukon.

In total, the team obtained 74 samples of speleothems, or sections of stalagmites, stalactites, and flowstones, from at least five caves in each region, representing various cave depths, geometries, and glacial histories. Each sampled cave was located on exposed slopes that were likely the first parts of the permafrost landscape to thaw with warming.

The samples were flown to MIT, where McGee and his lab used precise geochronology techniques to determine the ages of each sample’s layers, each layer reflecting a period of permafrost thaw.

“Each speleothem was deposited over time like stacked traffic cones,” says McGee. “We started with the outermost, youngest layers to date the most recent time that the permafrost thawed.”

McGee and his colleagues used techniques of uranium/thorium geochronology to date the layers of each speleothem. The dating technique relies on the natural decay process of uranium to its daughter isotope, thorium 230, and the fact that uranium is soluble in water, whereas thorium is not.

“In the rocks above the cave, as waters percolate through, they accumulate uranium and leave thorium behind,” McGee explains. “Once that water gets to the stalagmite surface and precipitates at time zero, you have uranium, and no thorium. Then gradually, uranium decays and produces thorium.”

The team drilled out small amounts from each sample and dissolved them through various chemical steps to isolate uranium and thorium. Then they ran the two elements through a mass spectrometer to measure their amounts, the ratio of which they used to calculate a given layer’s age.

From their analysis, the researchers observed that samples collected from the Yukon and the farthest northern sites bore samples no younger than 400,000 years old, suggesting permafrost thaw has not occurred in those sites since then. 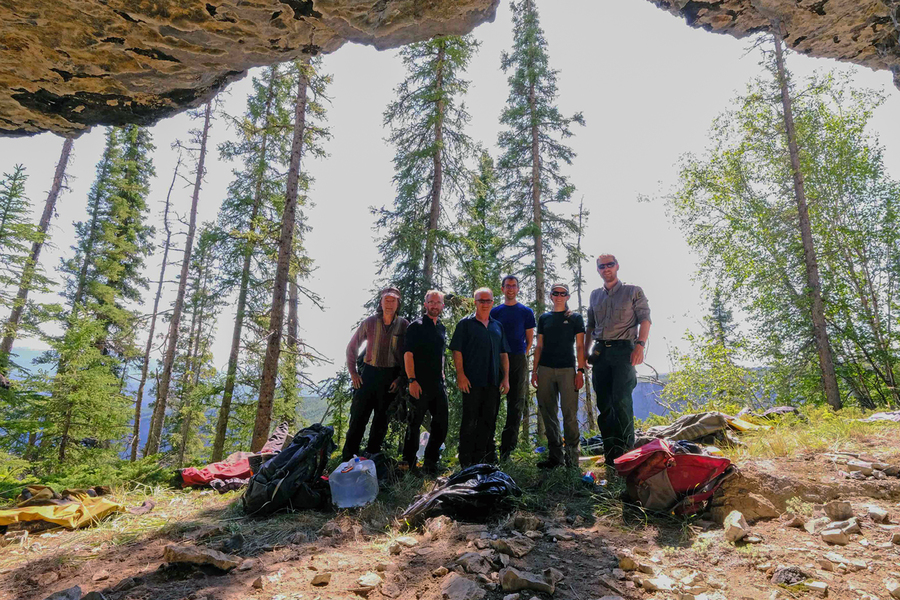 “There may have been some shallow thaw, but in terms of the entire rock above the cave being thawed, that hasn’t occurred for the last 400,000 years, and was much more common prior to that,” McGee says.

The results suggest that the Earth’s permafrost was much less stable prior to 400,000 years ago and was more prone to thawing, even during interglacial periods when levels of temperature and atmospheric carbon dioxide were on par with modern levels, as other work has shown.

“To see this evidence of a much less stable Arctic prior to 400,000 years ago, suggests even under similar conditions, the Arctic can be a very different place,” McGee says. “It raises questions for me about what caused the Arctic to shift into this more stable condition, and what can cause it to shift out of it.”

Story Image: Earth’s permafrost shifted to a more stable state in the last 400,000 years and has been less susceptible to thawing since then, according to a new study by MIT researchers and their colleagues, who are pictured here on a research expedition. Credits: Courtesy of the researchers

A “pacemaker” for North African climate

Saharan dust in the wind