This month has seen relatively few comings and goings. We welcome Assistant Professors William Frank and Camilla Cattania to the department, as well as postdoc Florent Aden. Congratulations to Christopher Follett from the Follows group, who was promoted to Research Scientist. 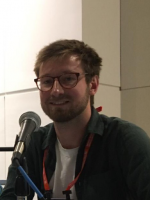 Florent Aden joins the Frank group as a postoc. He is a seismologist, who is particularly interested in the analysis and the modelling of seismic catalogs, the automated detection and location of seismic sources and the preparation of large subduction earthquakes. He obtained his PhD in the Institut de Physique du Globe de Paris, France in January 2019. After completing his PhD, he was a Postdoctoral Scholar at the University of Southern California.

At MIT, his main research topic focuses on the large spectrum of what is called the slow-earthquakes. Slow-earthquakes have been a hot topic in seismology for many years, but still remain poorly understood. Within this particular type of shear along the subduction interface, we can observe on seismometers tremors and low-frequency earthquakes (LFEs). While slow-slip events (SSEs) or silent slip are only observable through geodetic measurement (GPS, tiltmeter, etc.), but are all the manifestation of the same process. SSEs release as much energy as regular earthquakes, however, within a larger amount of time, ranging from days to months. During his time at MIT, Aden aims to build the first comprehensive catalog of LFEs for the Manawatu region in the North Island of New Zealand to better image the SSE activity on the plate interface. This region is of particular interest since these SSEs take place at the bottom of the seismogenic zone of the subduction. This would eventually promote large ruptures on the shallower portion of the interface and threaten cities like the capital, Wellington.

Who has left:
Tyler Mackey - postdoc in the Bergman Group