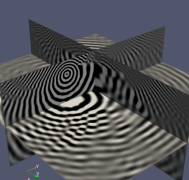 A new mathematical method from MIT researchers eliminates a theoretical limit on the complexity of 3D waveform simulations.

Computer simulations of waveforms are essential tools for researchers in many fields, from earth science and the energy industry to medical imaging. A new mathematical method developed by MIT researchers eliminates a theoretical limit on the complexity of the simulations these fields can create as they work with increasingly powerful supercomputers.

In addition to having many practical applications, wavefield simulations offer fascinating computing challenges, particularly when it comes to high-resolution 3D simulations of high-frequency waves. Higher resolutions and frequencies require more data points, which require more computations, and the relationship is not linear—that is, small increases in the amount of data can lead to large increases in the computing power required to run the simulation. This means that as researchers use more powerful computers to model waveforms, the increases in power will have less and less benefit, potentially placing hard limits on what they can simulate even as technology improves.

About ten years ago researchers found a possible way around this using a mathematical method called a “sweeping preconditioner” that allows the data to be processed more efficiently, so that the relationship between data points and computations is linear. That could eliminate the hard limits, but until now it only worked with a single processor, not the nodes of parallel processors used by supercomputers. Since then, Professor of Applied Mathematics Laurent Demanet and his collaborators have been working on improving this approach, and a paper in the Journal of Computational Physics marks a big step forward. Demanet and his co-authors present “L-Sweeps,” a new sweeping preconditioner that “scales optimally in parallel,” meaning it works on parallel processors while preserving the linear relationship between data points and computations.

“We now have a complete solution to an algorithmic bottleneck that had plagued seismic imaging since it became a computation-intensive task in the 1980s. The idea behind L-sweeps is much cleaner than we thought possible when we set out to solve this question 10 years ago,” says Demanet. From seismograms to ultrasounds, the result opens new possibilities for what researchers can potentially learn from waveform simulations.

Laurent Demanet is Director of the MIT Earth Resources Laboratory (ERL) and is affiliated with Mathematics and the Department of Earth, Atmospheric and Planetary Sciences (EAPS). His co-authors include Matthias Taus (EMTensor GmBH) and Russell J. Hewett (Virginia Tech.), both former postdoctoral associates in ERL and Mathematics; and Leonardo Zepeda-Nunez (U. Wisconsin – Madison), former graduate student in ERL and Mathematics.

Story Image: Three intersecting planes with patterns on their surfaces resembling a geophysical model. (Credit: courtesy of the researchers)

Triggered earthquakes give insight into changes below Earth’s surface