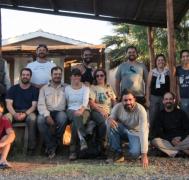 Study sheds light on the evolution of the earliest dinosaurs

In 2017, however, this classical view of dinosaur evolution was thrown into question with evidence that perhaps the lizard-hipped dinosaurs evolved first — a finding that dramatically rearranged the first major branches of the dinosaur family tree.

Now an MIT geochronologist, along with paleontologists from Argentina and Brazil, has found evidence to support the classical view of dinosaur evolution. The team’s findings are published today in the journal Scientific Reports.

The team reanalyzed fossils of Pisanosaurus, a small bipedal dinosaur that is thought to be the earliest preserved Ornithiscian in the fossil record. The researchers determined that the bird-hipped herbivore dates back to 229 million years ago, which is also around the time that the earliest lizard-hipped Saurischians are thought to have appeared.

The new timing suggests that Ornithiscians and Saurischians first appeared and diverged from a common ancestor at roughly the same time, giving support to the classical view of dinosaur evolution.

The researchers also dated rocks from the Ischigualasto Formation, a layered sedimentary rock unit in Argentina that is known for having preserved an abundance of fossils of the very earliest dinosaurs. Based on these fossils and others across South America, scientists believe that dinosaurs first appeared in the southern continent, which at the time was fused together with the supercontinent of Pangaea. The early dinosaurs are then thought to have diverged and fanned out across the world.

However, in the new study, the researchers determined that the period over which the Ischigualasto Formation was deposited overlaps with the timing of another important geological deposit in North America, known as the Chinle Formation.

The middle layers of the Chinle Formation in the southwestern U.S. contain fossils of various fauna, including dinosaurs that appear to be more evolved than the earliest dinosaurs. The bottom layers of this formation, however, lack animal fossil evidence of any kind, let alone early dinosaurs. This suggests that conditions within this geological window prevented the preservation of any form of life, including early dinosaurs, if they walked this particular region of the world.

“If the Chinle and Ischigualasto formations overlap in time, then early dinosaurs may not have first evolved in South America, but may have also been roaming North America around the same time,” says Jahandar Ramezani, a research scientist in MIT’s Department of Earth, Atmospheric, and Planetary Sciences, who co-authored the study. “Those northern cousins just may not have been preserved.”

The other researchers on the study are first author Julia Desojo from the National University of La Plata Museum, and a team of paleontologists from institutions across Argentina and Brazil.

The earliest dinosaur fossils found in the Ischigualasto Formation are concentrated within what is now a protected provincial park known as “Valley of the Moon” in the San Juan Province. The geological formation also extends beyond the park, albeit with fewer fossils of early dinosaurs. Ramezani and his colleagues instead looked to study one of the accessible outcrops of the same rocks, outside of the park.

They focused on Hoyada del Cerro Las Lajas, a less-studied outcrop of the Ischigualasto Formation, in La Rioja Province, which another team of paleontologists explored in the 1960s.

“Our group got our hands on some of the field notes and excavated fossils from those early paleontologists, and thought we should follow their footsteps to see what we could learn,” Desojo says.

Over four expeditions between 2013 to 2019, the team collected fossils and rocks from various layers of the Las Lajas outcrop, including more than 100 new fossil specimens, though none of these fossils were of dinosaurs. Nevertheless, they analyzed the fossils and found they were comparable, in both species and relative age, to nondinosaur fossils found in the park region of the same Ischigualasto Formation. They also found out that the Ischigualasto Formation in Las Lajas was significantly thicker and much more complete than the outcrops in the park. This gave them confidence that the geological layers in both locations were deposited during the same critical time interval.

Ramezani then analyzed samples of volcanic ash collected from several layers of the Las Lajas outcrops. Volcanic ash contains zircon, a mineral that he separated from the rest of the sediment, and measured for isotopes of uranium and lead, the ratios of which yield the mineral’s age.

With this high-precision technique, Ramezani dated samples from the top and bottom of the outcrop, and found that the sedimentary layers, and any fossils preserved within them, were deposited between 230 million and 221 million years ago. Since the team determined that the layered rocks in Las Lajas and the park match in both species and relative timing, they could also now determine the exact age of the park’s more fossil-rich outcrops.

Moreover, this window overlaps significantly with the time interval over which sediments were deposited, thousands of kilometers northward, in the Chinle Formation.

“For many years, people thought Chinle and Ischigualasto formations didn’t overlap, and based on that assumption, they developed a model of diachronous evolution, meaning the earliest dinosaurs appeared in South America first, then spread out to other parts of the world including North America,” Ramezani says. “We’ve now studied both formations extensively, and shown that diachronous evolution isn’t really based on sound geology.”

Decades before Ramezani and his colleagues set out for Las Lajas, other paleontologists had explored the region and unearthed numerous fossils, including remains of Pisanosaurus mertii, a small, light-framed, ground-dwelling herbivore. The fossils are now preserved in an Argentinian museum, and scientists have gone back and forth on whether it is a true dinosaur belonging to the Ornithiscian group, or a “ basal dinosauromorph” — a kind of pre-dinosaur, with features that are almost, but not quite fully, dinosaurian.

“The dinosaurs we see in the Jurassic and Cretaceous are highly evolved, and ones we can nicely identify, but in the late Triassic, they all looked very much alike, so it’s very hard to distinguish them from each other, and from basal dinosauromorphs,” Ramezani explains.

His collaborator Max Langer from the University of São Paulo in Brazil painstakingly reanalyzed the museum-preserved fossil of Pisanosaurus, and concluded, based on certain key anatomical features, that it is indeed a dinosaur — and what’s more, that it is the earliest preserved Ornithiscian specimen. Based on Ramezani’s dating of the outcrop and the interpretation of Pisanosaurus, the researchers concluded that the earliest bird-hipped dinosaurs appeared around 229 million years ago — around the same time as their lizard-hipped counterparts.

“We can now say the earliest Ornithiscians first showed up in the fossil record roughly around the same time as the Saurischians, so we shouldn’t throw away the conventional family tree,” Ramezani says. “There are all these debates about where dinosaurs appeared, how they diversified, what the family tree looked like. A lot of those questions are tied to geochronology, so we need really good, robust age constraints to help answer these questions.”

This research was mainly funded by the National Council for Scientific and Technical Research (Argentina) and the São Paulo State Research Support Foundation (Brazil). Geochronologic research at the MIT Isotope Lab has been supported in part by the U.S. National Science Foundation.

Story Image: The classic dinosaur family tree has two subdivisions of early dinosaurs at its base: the Ornithischians, or bird-hipped dinosaurs, and the Saurischians, or lizard-hipped dinosaurs. In this photo-illustration, a drawing of a bird-hipped Ornithiscian is surrounded by fossils of Pisanosaurus, a small bipedal dinosaur whose fossils have been analyzed in a new study. Image: Bone images courtesy of the researchers. Edited by MIT News.

Rise of the dinosaurs

An extinction without warning