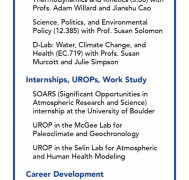 ESI launched the Minor in Environment & Sustainability in 2018, which means we now have the pleasure of seeing our first cohorts of graduates go out into the world. As they depart MIT, we’ll be interviewing a few of them to understand what worked and didn’t work in their sustainability careers on campus.

Read this at ESI

Gabriela Cazares came to MIT from Mission, Texas, where some outstanding teachers in chemistry and environmental science already had her thinking about the impact she could have on the planet. That commitment to sustainability never wavered at MIT, but it took her some time to find the right links between her field of chemistry and her interest in the environment.

In her chemistry GIR 5.111 Principles of Chemical Science with Prof. Moungi Bawendi, the connections clicked for her. Prof. Bawendi gave a lecture on thermodynamics where he tied the subject to the challenge of powering the planet. “When he was talking about enthalpy of reactions, he talked about chemical bonds breaking and forming and how that relates to energy density,” says Cazares. “So why we use fossil fuels, and what is the challenge of electric cars and solar energy. And that was the moment where I was like, there is a link in chemistry, right? So I was like, I can do this.”

Cazares became interested in atmospheric chemistry, but she had a hard time getting a toehold in real lab work. Many opportunities were unwilling to teach the foundational skills she would need to get ahead in the field. “I had zero experience in anything, so I had such a hard time finding UROPs,” she says. “They were like, what’s your experience using this, and what’s your experience coding. And I was thinking, well, nothing, because I didn’t start taking labs, nor did I start coding until junior year.” Her second year at MIT, she finally broke through with a UROP under Prof. David McGee, reconstructing the ancient climate of Mexico with a graduate student named Gabriela Serrato Marks. “She was like, don’t worry about the experience. You’ll learn here. Out of everyone, she was the biggest help at MIT for me. I still talk to her to this day. She was super helpful with the academic part, but also with the personal side.”

“I can code now,” Cazares adds. “Like, once you get one job, other jobs are like, okay, you have experience.”

Cazares is still pursuing the connections between chemistry and climate, as she heads off to UC Berkeley to pursue a PhD in physical chemistry in order to research atmospheric dynamics. She also found ways, in her last year at MIT, to extend her interest in sustainability beyond her lab work. As part of the spring 2020 class EC.719 D-Lab: Water, Climate Change and Health, Cazares and some of her classmates began designing a climate change class for high school and early college students, called “Surviving and Thriving in the 21st Century.” “And then we actually went through with making the course and teaching it in the summer,” Cazares says. With her classmate Clara Gervaise-Volaire, Cazares brought the class online and ran it for high school and college students.

“But there were also all of these other projects that had the potential of continuing,” she says. She continues to spend the summer working with the MIT administration on the education portion of MIT’s Plan for Action on Climate Change. “The idea that I like the best is implementing climate change into classes,” she says. “Most fields have something to do with climate change. There don’t have to be a lot of issues with changing a whole syllabus.” After all, this worked for Cazares herself, when Prof. Bawendi brought the climate crisis into his thermodynamics lecture back in her sophomore year.

“It’s not like a major change in classes,” she says. “I think this would be the most efficient way to introduce climate change education at MIT.”

Story Image: Gabriela Cazares with her cap and gown celebrates her graduation in 2020.