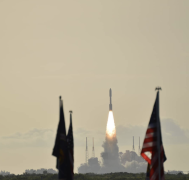 I watched Mars 2020 launch from Cape Canaveral, a “bon voyage” for a mission bound for Mars with MIT projects aboard.

Early on the morning of July 30th, I pulled into the parking lot at the NASA Kennedy Space Center press site, reached for my galaxy-print face mask, and thought for the seventeenth time that day, “I can’t believe I’m here.” In the outbreak of COVID-19, in the crescendo of anti-racist activism, engineers, scientists, project managers, and communicators had brought Mars 2020 to the launch pad. I had heard one reporter quip in a press briefing the day prior, “Why is Mars 2020 launching now? Don’t we have enough to worry about on the ground?”

I thought of friends and colleagues at MIT who had contributed to this mission and were watching the launch from home—MIT is a community I would characterize as intrinsically hopeful. Also, they’re cautious, prepared, not immune to bias; but overall, hopeful, that we can work together to build something greater than ourselves, with an impact wider than our own immediate circles.

Just before 8 a.m., the Mars 2020 spacecraft holding the Perseverance rover and Ingenuity helicopter lifted off from Launch Complex 41 at Cape Canaveral in Florida and began its 300-million-mile journey to the Red Planet. I watched its ascent from the press site, just 3.8 miles away from the launch pad, standing in the tall grass by the countdown clock alongside mask-clad TV camera operators and photographers. All of us suddenly snapped to attention, eyes to the viewfinder, when the countdown clock ticked down to zero, and someone called softly over the field, “Here we go!”

In a matter of seconds, the rocket was high overhead, its tail of flame orange and brilliant. The rumble of its engines slowly rolled over us, drowning out the click of camera shutters; and then it was a tiny pinprick. And then it was gone, its path marked by a billowing column of white smoke. Nearly a decade in the making, with a prime mission of one Martian year, or two Earth years, we would only see the first thirty seconds of its journey with our own eyes.

Mars 2020 is a beautifully-designed mission, each part of the spacecraft, from the wheels to the microphones, is optimized to give us as much information as possible about the Martian environment. I’m envious of the rich, multi-sensory array of instruments aboard Mars 2020, as my field, exoplanets, is searching for the tiny signatures of planets around stars hundreds of light-years away. Mars 2020 borrows the best parts of the design of its rover predecessor, Curiosity, bristling with instruments and an interior “clean lab” to intensively sample and study the mineralogy of its surroundings, and bringing along experimental, imaginative tools which bring the dream of human visits to Mars closer to a tangible reality.

When it gets to Mars on February 18, 2021, it will begin its mission in the ancient river delta, Jezero Crater. The Perseverance rover is equipped with tools and cameras to explore the surrounding landscape, search for geological features indicative of ancient life, and carefully cache samples of rocks and regolith (loose, superficial, rocky deposits) in sample tubes for a future mission to pick up and return to Earth. The rover is also a testbed for technologies, which will aid future human and robotic missions to Mars, such as the Ingenuity helicopter and the MIT-led MOXIE experiment — a “little tree,” which will test converting carbon dioxide in the thin Martian atmosphere into oxygen for humans to breathe and use as rocket fuel, one day.

On the morning of the launch, I felt I had a pretty good idea of how all the scientists and engineers, who had poured themselves into each aspect of the mission, were feeling: a mix of nostalgia, terror, and awe. One part of the mission was drawing to a close, but another was just beginning, and its outcome, yet to be known. I had felt that rush of emotion watching NASA’s TESS mission lift off from Launch Complex 40 aboard a SpaceX Falcon 9 rocket. I had been part of the flight testing team at MIT for the four wide-angle cameras on the TESS spacecraft and attended the launch as part of the science team communicating the goals and design of the TESS mission to the media. As I watched Mars 2020 arc above my head, I felt the familiar swell of pride for all the hard work that had gone into this moment, and the rush of excitement for the work still to come.

Bio: Natalia Guerrero (’14) curates the catalog of exoplanet candidates, or TESS Objects of Interest, for NASA’s TESS mission at MIT. She currently works from home in Orlando, Florida where she grew up watching rocket launches from her front yard.

Mars 2020 Perserverance has launched: The search for ancient life is on

With Perseverance and a little MOXIE, MIT is going to Mars

Out There: Coming of age on Mars

How to detect life on Mars

Going to the Red Planet