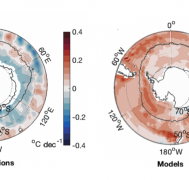 Tucked away at the very bottom of the globe surrounding Antarctica, the Southern Ocean has never been easy to study. Its challenging conditions have placed it out of reach to all but the most intrepid explorers. For climate modelers, however, the surface waters of the Southern Ocean provide a different kind of challenge: it doesn’t behave the way they predict it would. “It is colder and fresher than the models expected,” says Craig Rye, a postdoctoral fellow in Cecil and Ida Green Professor of Oceanography John Marshall’s group in MIT’s Department of Earth, Atmospheric and Planetary Sciences (EAPS).

In recent decades, as the world warms, the Southern Ocean’s surface temperature has cooled, allowing the amount of ice that crystallizes on the surface each winter to grow. This is not what climate models anticipated, and a recent study published in Geophysical Research Letters attempts to disentangle that discrepancy. “This paper is motivated by a disagreement between what should be happening according to simulations and what we observe,” says Rye, the lead author of the paper who is currently working remotely from NASA’s Goddard Institute for Space Studies, or GISS, in New York City.

“This is a big conundrum in the climate community,” says Marshall, a co-author on the paper along with Maxwell Kelley, Gary Russell, Gavin A. Schmidt, and Larissa S Nazarenko of GISS, James Hansen of Columbia University’s Earth Institute and Yavor Kostov of the University of Exeter. There are 30 or so climate models used to foresee what the world might look like as the climate changes. According to Marshall, models don’t match the recent observations of surface temperature in the Southern Ocean, leaving scientists with a question that Rye, Marshall, and their colleagues intend to answer: how can the Southern Ocean cool when the rest of the Earth is warming?

This isn’t the first time Marshall has investigated the Southern Ocean and its climate trends. In 2016, Marshall and Yavor Kostov PhD ’16 published a paper exploring two possible influences driving the observed ocean trends: greenhouse gas emissions, and westerly winds – strengthened by expansion of the Antarctic ozone hole — blowing cold water northward from the continent. Both explained some of the cooling in the Southern Ocean, but not all of it. “We ended that paper saying there must be something else,” says Marshall.

That something else could be meltwater released from thawing glaciers. Rye has probed the influence of glacial melt in the Southern Ocean before, looking at its effect on sea surface height during his PhD at the University of Southampton in the UK. “Since then, I’ve been interested in the potential for glacial melt playing a role in Southern Ocean climate trends,” says Rye.

The group’s recent paper uses a series of “perturbation” experiments carried out with the GISS global climate model where they abruptly introduce a fixed increase in melt water around Antarctica and then record how the model responds. The researchers then apply the model’s response to a previous climate state to estimate how the climate should react to the observed forcing. The results are then compared to the observational record, to see if a factor is missing. This method is called hindcasting.

Marshall likens perturbation experiments to walking into a room and being confronted with an object you don’t recognize. “You might give it a gentle whack to see what it’s made of,” says Marshall. Perturbation experiments, he explains, are like whacking the model with inputs, such as glacial melt, greenhouse gas emissions, and wind, to uncover the relative importance of these factors on observed climate trends.

When this increase in glacial melt was added to the model, it led to sea surface cooling, decreases in salinity, and expansion of sea ice coverage that are consistent with observed trends in the Southern Ocean during the last few decades. Their model results suggest that meltwater may account for the majority of previously misunderstood Southern Ocean cooling.

The model shows that a warming climate may be driving, in a counterintuitive way, more sea ice by increasing the rate of melting of Antarctica’s glaciers. According to Marshall, the paper may solve the disconnect between what was expected and what was observed in the Southern Ocean, and answers the conundrum he and Kostov pointed to in 2016. “The missing process could be glacial melt.”

Research like Rye’s and Marshall’s help project the future state of Earth’s climate and guide society’s decisions on how to prepare for that future. By hindcasting the Southern Ocean’s climate trends, they and their colleagues have identified another process, which must be incorporated into climate models. “What we’ve tried to do is ground this model in the historical record,” says Marshall. Now the group can probe the GISS model response with further “what if?” glacial melt scenarios to explore what might be in store for the Southern Ocean.

A Climate Window in the Southern Ocean

Solving the Mystery of the Antarctic’s Missing Heat

In a Spin: New Insights into the Beaufort Gyre

New Climate Model to be Built from the Ground up