By making their own lava and cooled glass, scientists find these materials likely aren’t responsible for the unexpected glow of some exoplanets.

Arguably some of the weirdest, most extreme planets among the more than 4,000 exoplanets discovered to date are the hot super-Earths — rocky, flaming-hot worlds that zing so precariously close to their host stars that some of their surfaces are likely melted seas of molten lava.

These fiery worlds, about the size of Earth, are known more evocatively as “lava-ocean planets,” and scientists have observed that a handful of these hot super-Earths are unusually bright, and in fact brighter than our own brilliant blue planet.

Exactly why these far-off fireballs are so bright is unclear, but new experimental evidence by scientists at MIT shows that the unexpected glow from these worlds is likely not due to either molten lava or cooled glass (i.e. rapidly solidified lava) on their surfaces.

The researchers came to this conclusion after interrogating the problem in a refreshingly direct way: melting rocks in a furnace and measuring the brightness of the resulting lava and cooled glass, which they then used to calculate the brightness of regions of a planet covered in molten or solidified material. Their results revealed that lava and glass, at least as a product of the materials they melted in the lab, are not reflective enough to explain the observed brightness of certain lava-ocean planets.

Their findings suggest that hot super-Earths may have other surprising features that contribute to their brightness, such as metal-rich atmospheres and highly reflective clouds.

“We still have so much to understand about these lava-ocean planets,” says Zahra Essack, a graduate student in MIT’s Department of Earth, Atmospheric, and Planetary Sciences. “We thought of them as just glowing balls of rock, but these planets may have complex systems of surface and atmospheric processes that are quite exotic, and not anything we’ve ever seen before.”

Essack is the first author of a study detailing the team’s results, which appears today in The Astrophysical Journal. Her co-authors are former MIT postdoc Mihkel Pajusalu, who was instrumental in the experiment’s initial setup, and Sara Seager, the Class of 1941 Professor of Planetary Science, with appointments in the departments of Physics and Aeronautics and Astronautics.

Hot super-Earths are between one and 10 times the mass of Earth, and have extremely short orbital periods, circling their host star in just 10 days or less. Scientists have expected that these lava worlds would be so close to their host star that any appreciable atmosphere and clouds would be stripped away. Their surfaces as a result would be at least 850 kelvins, or 1,070 degrees Fahrenheit — hot enough to cover the surface in oceans of molten rock.

Scientists have previously discovered a handful of super-Earths with unexpectedly high albedos, or brightnesses, in which they reflected between 40 and 50 percent of the light from their star. In comparison, the Earth’s albedo, with all of its reflective surfaces and clouds, is only around 30 percent.

“You’d expect these lava planets to be sort of charcoal balls orbiting in space — very dark, not very bright at all,” Essack says. “So what makes them so bright?”

One idea has been that the lava itself may be the main source of the planets’ luminosity, though there had never been any proof, either in observations or experiments.

“So being MIT people, we decided, ok, we should make some lava and see if it’s bright or not,” Essack says.

To first make lava, the team needed a furnace that could reach temperatures high enough to melt basalt and feldspar, the two rock types that they chose for their experiments, as they are well-characterized material that are common on Earth. 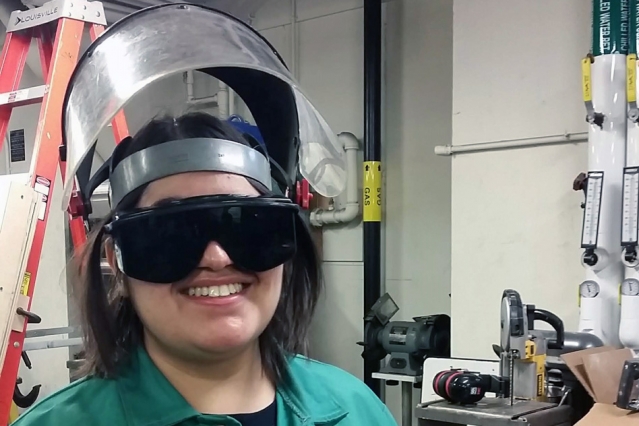 As it turns out, they initially didn’t have to look farther than the foundry at MIT, a space within the Department of Materials Science and Engineering, where trained metallurgists help students and researchers melt materials in the foundry’s furnace for research and class projects.

Essack brought samples of feldspar to the foundry, where metallurgists determined the type of crucible in which to place them, and the temperatures at which they needed to be heated.

“They drop it in the furnace, let the rocks melt, take it out, and then the whole place turns into a furnace itself — it’s very hot,” Essack says. “And it was an incredible experience to stand next to this bright glowing lava, feeling that heat.”

However, the experiment quickly ran up against an obstacle: The lava, once it was pulled from the furnace, almost instantly cooled into a smooth, glassy material. The process occurred so quickly that Essack wasn’t able to measure the lava’s reflectivity while still molten.

So she took the cooled feldspar glass to a spectroscopy lab she designed and implemented on campus to measure its reflectance, by shining a light on the glass from different angles and measuring the amount of light reflecting back from the surface. She repeated these experiments for cooled basalt glass, samples of which were donated by colleagues at Syracuse University who run the Lava Project. Seager visited them a few years ago for a preliminary version of the experiment, and at that time collected basalt samples now used for Essack’s experiments.

“They melted a huge bunch of basalt and poured it down a slope, and they chipped it up for us,” Seager says.

After measuring the brightness of cooled basalt and feldspar glass, Essack looked through the literature to find reflectivity measurements of molten silicates, which are a major component of lava on Earth. She used these measurements as a reference to calculate how bright the initial lava from the basalt and feldspar glass would be. She then estimated the brightness of a hot super-Earth covered either entirely in lava or cooled glass, or combinations of the two materials.

In the end, she found that, no matter the combination of surface materials, the albedo of a lava-ocean planet would be no more than about 10 percent — pretty dark compared with the 40 to 50 percent albedo observed for some hot super-Earths.

“This is quite dark compared to Earth, and not enough to explain the brightness of the planets we were interested in,” Essack says.

This realization has narrowed the search range for interpreting observations, and directs future studies to consider other exotic possibilities, such as the presence of atmospheres rich in reflective metals.

“We’re not 100 percent sure what these planets are made of, so we’re narrowing the parameter space and guiding future studies toward all these other potential options,” Essack says.

Study: Life might survive, and thrive, in a hydrogen world