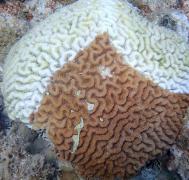 Research labs have shut down at institutions and universities around the world due to the COVID-19 pandemic, but that hasn’t stopped scientists from Woods Hole Oceanographic Institution (WHOI) from investigating critical problems in the ocean. And that’s a good thing, because a team of microbiologists are in a race against time to help solve a different kind of outbreak—one that’s traveling silently below the ocean’s surface and ravaging coral reefs from Florida to the Caribbean.

“We’re trying to understand what is causing Stony Coral Tissue Loss Disease (SCTLD), a rapidly-spreading disease that can kill more than 30% of reef-building coral species in a given area in a matter of weeks,” says Cynthia Becker, a MIT-WHOI Joint Program Ph.D. student.

Stony corals provide the framework to support coral reef ecosystems, which are one of the most diverse ecosystems on the planet. Reefs are a source of pharmaceutical products and natural-based treatments, and help generate over $30 billion each year in goods and services to humans, including fisheries, tourism, and coastal protection.

Becker and her advisor, WHOI microbiologist Amy Apprill, believe marine bacteria may be at least partially responsible for SCTLD, and have been working to identify specific bacterial communities that could be the culprit. Surprisingly, the scientists have kept their research on the fast track—all without stepping foot inside an actual laboratory.

No shoes, no lab, no problem

Just weeks before COVID-19 reached household name status in the U.S., Becker and Apprill set up a makeshift biology lab in an Airbnb villa rental in St. Thomas, U.S. Virgin Islands—a SCTLD hot spot. There, they collected coral tissue and seawater samples by day, and ran DNA sequencing on coral samples by night to understand the type of genetic information contained in their tissues.

“We took all of the equipment we needed to set up a ‘pop-up’ lab in our rental house, including miniature centrifuges and a compact DNA sequencer,” says Becker.

She says the sequencer—which looks like a white laser jet printer with an iPad on top—allowed the researchers to work up diseased coral samples within days of collection and analyze results just 18 hours later.

“If we had waited until we got back to WHOI to process and sequence the coral samples, they would likely still be in a freezer and the research may have been delayed for months or even longer,” says Becker.

Apprill agrees that on-site DNA sequencing was key to speeding up their investigation of the raging coral disease, and says that working out of a vacation home on the island wasn’t just convenient—it was necessary.

“St. Thomas has yet to fully recover from Hurricanes Irma and Maria in 2017, and the marine science building at the University of the Virgin Islands is still awaiting renovations,” she says. “We’ve been working very closely with coral disease expert Dr. Marilyn Brandt to investigate the disease, but it wasn’t even possible to for us to get space in her laboratory.”

Without a proper lab to work in, it became particularly important for the scientists to function as autonomously as possible in their Airbnb rental.

“Obviously, we don’t typically do this kind of work in kitchens and bedrooms,” says Apprill, “but it gave us a chance to get some answers right away about what’s going on.”

Hurry up and wait

The researchers collected and sequenced over one hundred coral samples during their two-week field visit to St. Thomas, allowing them to fly back home with a hard drive of data ready for analysis—and without the nail-biting anxiety often associated with transporting biological samples on commercial airlines.

Just as things were cruising along, the team returned to the U.S. where COVID-19 cases began to surge. Two weeks later, following Massachusetts Governor Baker’s lead, WHOI closed its facilities until further notice.

The scientists found themselves, once again, without a lab to work in. This time, they’d have to carry on in their own homes.

“Working from home has been a big adjustment for me,” says Becker. “When I’m at WHOI, there are usually a lot of meetings to go to and I typically only spend a few days per week sitting at my desk doing data analysis.”

She says it’s difficult for her to sit and focus on the computer screen for long periods of time, but taking walks and doing yoga has helped.

“On the positive side, I’ve been able to designate more time to analyzing the diseased coral data while waiting out the COVID-19 pandemic,” she says. “The research is moving along faster than it likely would be if we were back at WHOI.”

Becker is already seeing clear differences between the microbial communities associated with diseased corals--which include potentially pathogenic microbes such as Arcobacter and Vibrio--compared to those associated with healthy, colorful corals. And through remote meetings and collaboration, she, Apprill, and other researchers from their lab have been able to identify specific bacteria that have shown up consistently on diseased corals—even across different species and reefs.

“Identifying the specific bacteria is key, as knowing whether these ‘disease indicator bacteria’ play a role in SCTLD could help in the development of a treatment to help slow the spread of the disease, which so far has shown no signs of stopping,” she says.

This research is funded by The Tiffany & Co. Foundation and the National Science Foundation.