Researchers, including Christine Chen PhD '19, combine observations of ancient shorelines and properties of Earth’s crust to infer the size of the Laurentide Ice Sheet during the last glacial cycle.

Read this at EOS

Chen, now a geology postdoc at the California Institute of Technology in Pasadena, was tracing Lake Bonneville’s shoreline deposits throughout the state, carefully measuring their elevation with GPS. Researchers have long known that the weight of the massive lake compressed Earth’s crust, which rebounded as the lake drained over time. In addition to the expected deposits, Chen and her colleagues also found the footprint of the Laurentide Ice Sheet, the behemoth glacier that once covered much of northern North America.

A New Angle on an Old Site

Lake Bonneville reached its maximum size (about 51,000 square kilometers) roughly 18,000 years ago, when the Great Basin enjoyed a much wetter climate than it does today. But even at its largest, islands broke through the surface of the lake, leaving behind peaks with the telltale signs of ancient shorelines. The ancient lake has long been a beacon for geologists.

“This is a very classic study site,” said Jacqueline Austermann, an assistant professor at Columbia University in New York and lead author on the new study.

In the late 19th century, Grove Karl Gilbert, a titan of geology, traced these ancient shorelines on horseback, taking careful measurements of their elevations. In 1885, Gilbert presented several years of field work at a conference, noting that curiously, the shoreline elevation of the islands was higher than the perimeter of the lake. Perhaps, Gilbert suggested, Earth’s crust was viscous, compacting and then rebounding as the water level dropped and the weight of the ancient lake disappeared.

The rebound phenomenon at Lake Bonneville “was unknown at the time but is commonly known now,” Austermann said, and it’s long provided researchers with insights into the structure of Earth’s shallow interior.

Austermann’s team revisited the arid shores of both Lake Bonneville and another massive paleolake, Lake Lahontan, in what is now western Nevada. “What’s new in the work that we’ve done,” she said, “is not just look at how the lake has deformed the shorelines but also how ice sheets have deformed the shorelines.”

“It’s a really neat study,” said Pippa Whitehouse, an associate professor of geography at Durham University in the United Kingdom not involved in the new research. “It combines the field I look at, which is global response to ice sheet change, with this local response to the lake loading that you have in the western U.S., with a couple of different techniques to understand more about both the Earth’s structure but also the history of the lake loading and the ice history. I’m just jealous that I didn’t do it myself.”

The study was recently published in Earth and Planetary Science Letters.

Following in Gilbert’s footsteps some 130 years later, Chen was armed with better technology and got even more precise elevation measurements of Lake Bonneville’s ancient shorelines. 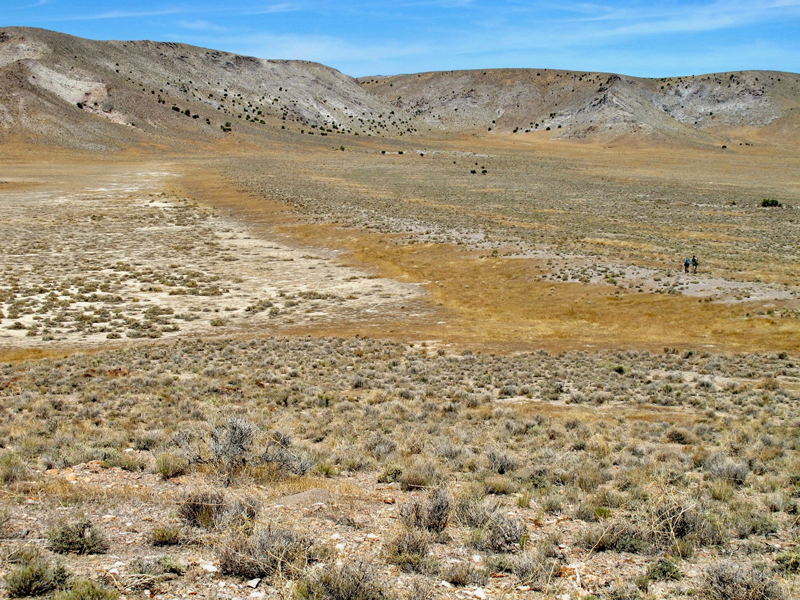 Later, the team used the updated shoreline elevations to model the deformation of the crust due to the lake alone. When they removed the lake-induced deformation data from the equation, they could still see a residual tilt in the topography that they suspected was due to the weight of the Laurentide Ice Sheet thousands of kilometers to the north.

Updated elevation data also allowed the researchers to draw conclusions about the properties of both shallow and deeper layers of Earth’s crust. The lighter load of the lake has long provided researchers with information on the viscosity of the structure of the crust directly beneath the lake, but isolating the tilt from the heavier ice sheet allowed researchers to draw conclusions about the viscosity of deeper structures in the wider region.

“We often have a problem untangling whether the rebound we’re seeing is reflecting shallow structure or deep structure, but here because they’ve got two loads of different sizes, then you can separate that to some degree,” said Whitehouse. “So they’ve got constraints on the shallow structure and, independently, the deeper structure, which is really rare in our field.”

From Shorelines to Ice Sheets

The researchers used ice sheet models to find out, given the properties of Earth’s crust in the region, what size of ice sheet could produce the shorelines we see today. To find the best fitting model, however, the team had to account for another factor long ignored in rebound studies of Lake Bonneville: Earth’s gravitational field. Researchers studying lake load deformation didn’t have to look at the water body’s effect on the gravitational field because it was negligible, but the ice sheet, with its much greater mass, does impact the gravity field.

The team expected to find that a larger ice sheet would indicate a bigger bulge and thus a steeper tilt, but they found that the ice sheet’s effect on the gravity field would have counteracted some of the bulging effect. “The findings that I hope will be useful are the constraints that this data and model can put on the shape of the Laurentide ice sheet and the viscosity of the upper 1,000 kilometers of the mantle,” Austermann said.

There’s still a lot of uncertainty over what the Laurentide Ice Sheet looked like over the course of the last glacial cycle, which has left researchers unable to fully account for past sea level changes, according to Whitehouse. “If you add up all the ice sheets, it doesn’t match the sea level,” she said. “That’s a big question for people in my field.” Ultimately, a better understanding of ancient ice sheet behavior could help researchers understand how ice sheets and Earth will respond to the current climate.

Although researchers have been studying this site for more than 100 years, it may not be preserved for much longer. “A lot of the paleoshoreline features on Lake Bonneville now are being mined for gravel,” Chen said, “and so a lot of these features are actually being actively removed and might not be able to be studied in the future.”

Story Image: Christine Y. Chen stands next to a deposit of tufa formed on top of bedrock at Antelope Island, Utah, in 2012. Tufa, a type of porous carbonate rock, formed within the waters of Lake Bonneville and serves as additional evidence left behind by the now relict lake. (Credit: Adam C. Maloof)