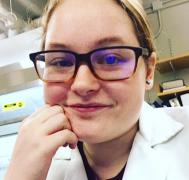 Early life at MIT and on Earth

Undergraduate Juliana Drozd looks for the synthesis of a “sunscreen” pigment in microbes and experiences the struggles of a budding scientist.

“This is my first time doing this without supervision,” Juliana Drozd said as she squirted ethanol on the lab bench and wiped it clean. “We’ll be fine,” she added.

This is the extraction of scytonemin, a pigment produced by colonies of certain cyanobacteria — previously known as photosynthetic blue green-algae. While cyanobacteria can grow freely in both freshwater and marine surface waters, as well as on the surfaces of buildings, they can also live within microbial mats, multi-layered microbial communities. It’s microbial mats that interest Drozd, an undergraduate in the MIT Department of Earth, Atmospheric and Planetary Sciences (EAPS), because they may bring scientists closer to understanding how ancient microbes protected themselves from ultraviolet (UV) radiation with sheath-pigments like scytonemin.

“Scytonemin is really interesting because it is only produced by cyanobacteria, so finding it or its diagenetic derivatives in the sedimentary rock record would tell us that cyanobacteria were definitely present,” Drozd says. “Because cyanobacteria are the primary reason for Earth’s atmospheric oxygen, understanding the species’ history on our planet is important, and we could get a better understanding of how biology and Earth evolved together from using scytonemin.”

In between classes and practices with the MIT figure skating club, Drozd conducts research in the laboratory of Schlumberger Professor of Geobiology Roger Summons, where she studies scytonemin and its potential abundance in the fossil record. Devoid of bones and invisible to the naked eye, many bacteria don’t leave strong traces of their existence in the geologic record. Stromatolites, rocks formed through the deposition of layer after layer of microbial mats and sediment, are one exception. And within them, scytonemin-like pigments have been found.

However, no one knows how well scytonemin is preserved, or if it is physically or chemically altered when it’s transformed into its fossil form. Drozd’s goal is to determine whether scytonemin can be used as a biomarker – measurable compounds that indicate the existence of a biological phenomenon or process — for cyanobacteria. In geobiology, biomarkers can be applied to trace the existence of life for millions and even billions of years ago. Moreover, they can give clues about paleoenvironmental conditions. To understand their potential, Drozd has isolated cyanobacteria from mats in order to grow them in the lab. She then examines what scytonemin looks like in those organisms. Or, as she summarizes it: “We grow them to kill them.”

That’s the plan on paper, at least. To detect scytonemin, Drozd had to quickly learn to tinker with protocols to detect the potential biomarker. When the protocols weren’t yielding the expected amounts of scytonemin, she conducted an unconventional test to examine those protocols, using known amounts of material to look at why it was undetectable. The problem, they hypothesized, could be due to bacteria underproducing the pigment, or due to a problem in the extraction protocol itself.

At the suggestion of Thomas Evans, a postdoctoral researcher in the Summons Lab, Drozd extracted scytonemin from cyanobacterial mats from Shark Bay, Australia, as well as carotenoids from six baby carrots, which are responsible for the bright orange color of many fruits and vegetables. Both carotenoids and scytonemin are pigments synthesized by cyanobacteria, and could be extracted using the same procedure. If scytonemin production was the issue, Evans reasoned, the carotenoids should still be detectable. If both carotenoid and scytonemin levels were low, the problem was with the methods.

Clad in a lab coat and purple nitrile gloves, Drozd added either cyanobacteria or macerated carrots to teflon vials filled with sterile sand and acetone and exposed them to ultrasonic vibrations. “The sand physically breaks up the bacteria,” Drozd said. “And then the lipids containing scytonemin or carotenoids are dissolved by the acetone.” After many iterations, Drozd is still conducting tests, searching for scytonemin in rocks and cultures.

“When you’re doing labs in class, you know what the outcome will be, and you have clear steps to follow, but this project has taught me about how important trial and error is in the scientific process,” Drozd says. “Real research is often challenging and doesn’t give clear results. Being an active participant in the scientific process, even if it’s not terribly fruitful, has been really inspiring.”

In addition to studying geobiology in the Summons Lab, Drozd conducted summer research at the NASA Goddard Center for Astrobiology studying amino acids produced during early Earth. In all her work, Drozd focuses on understanding what life on the early Earth looked like and what paths it took to get to life as we know it today. Drozd likes the possibility that scytonemin could provide a way to better understand the early Earth conditions that allowed cyanobacterial mats, and in turn, stromatolites, to form.

“I don’t know if we’ll ever be successful in using scytonemin as a biomarker, but the process of determining a novel biomarker is inspiring to me as a scientist, and teaches me the ups and downs of research,” Drozd says. “Learning this early on in my career, while I’m still an undergraduate, will help me to become a more resilient researcher in the future, and I look forward to the challenges science will pose for me in the future.”

Story Image: Drozd's particular interest in astrobiology is extremophilic microbes, like those in Yellowstone or Antarctica. Cyanobacteria are found in places like this prismatic hot spring that she's standing in front of. (Credit: courtesy of Juliana Drozd)

Continuing a Legacy of Antarctic Exploration

How to Survive in One of Earth’s Most Extreme Environments

The Power of Persistence and the Scientific Method