In the last six years, Stony Coral Tissue Loss Disease (SCTLD) has been taking over the reefs of Florida and the Caribbean. This disease originated near Miami, Florida, and has since traveled the entire extent of the Florida Reef Tract, down along the entire Mexican Caribbean Coast, and out to the Caribbean. This includes the U.S. Virgin Islands, where my lab does our fieldwork. This disease acts fast, and can kill over 30% of reef-building coral species. When the disease affects a coral, it causes white lesions to form. In a matter of weeks, the white lesions expand across healthy tissue, killing it and causing it to slough off. This exposes the underlying skeleton, making it available to algal growth. Although the disease is fast-acting and destructive, scientists have yet to fully understand what causes the disease and how it spreads across reefs.

Antibiotic treatments slow the disease, so scientists think bacteria may be at least partially responsible. This is where our lab comes in. Our lab studies microbiomes, or whole communities of bacteria and archaea. Specifically, I look at coral reef microbiomes. Most recently, I have applied our lab’s tools for studying coral microbiomes to learn about what bacteria may be responsible for SCTLD. If we can better identify the bacteria causing the disease, then we can better target treatments for the corals.

There’s one catch: often, getting a microbiome analysis done can take a long time. After physically collecting the coral samples, it is often months or years before the samples are processed, DNA is sequenced, and the microbiome is analyzed back in our lab at the Woods Hole Oceanographic Institution (WHOI).

Unfortunately, this disease can decimate a reef in a matter of weeks, so we don’t have that kind of time.

To combat the time-sensitive nature of this disease outbreak, we devised a system to transport our entire molecular lab from WHOI down to the U.S. Virgin Islands, where the disease continues to spread to new reefs. Instead of bringing our samples back to WHOI after collection, we processed them at a home rental on-site.

Instead of transporting large benchtop centrifuges, PCR machines, and DNA sequencers, we used miniature lab gear. Some of these included the mini8 by miniPCR, the BentoLab portable PCR and gel visualization machine, as well as some miniature centrifuges. The most exciting of our supplies was the Illumina iSeq 100, a DNA sequencer that looks a little like Wall-E: a 1-foot cube that produces 4 million high-quality reads in less than a day! 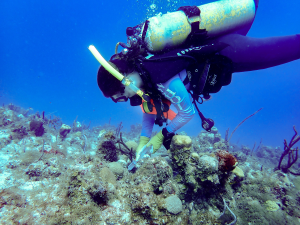 In our lab at WHOI, resources and equipment are well-established, allowing us to routinely perform DNA extractions and PCRs. Establishing the “pop-up” lab in the Virgin Islands required me to read over protocols several times to consider every small material needed. In the end, I had an extensive list of supplies to ship, from number of pipette tip boxes to larger equipment like the DNA sequencer. In all, we shipped down 10 large boxes and coolers and carried six more suitcases of gear onto the plane. We even coordinated a later dry ice shipment of sensitive sequencing reagents. After tracking down the 10 shipped boxes (including one that lost all labels, got separated from the rest, and was tracked down in the FedEx facility), I opened up every box to check that everything survived the shipment. Indeed, two bottles had broken in transit, requiring a call to my lab mates back at WHOI to ship these materials down again. After cataloging, checking lists twice, and setting up the sampling gear and dive equipment needed for collecting samples, we were ready to go. 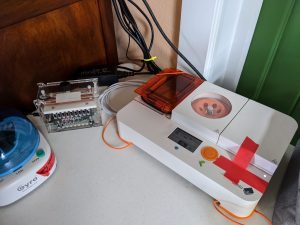 The mini8 (middle) and BentoLab (right) are PCR machines that are much smaller than standard laboratory PCR machines. Photo: Cynthia Becker

With just shy of two weeks in the field, working long days allowed us to get the most out of our short time. I spent two full days collecting samples with Amy Apprill, Lei Ma and our colleagues at the University of the Virgin Islands. Then, in a week and a half, my lab partner Carolyn Miller and I extracted DNA from coral tissue, made lots of copies of the bacterial DNA, purified that DNA, and sequenced it on the iSeq 100. By the end of our second week in the field, we had successfully run the sequencer 3 different times, sequencing ~120 samples.

For the first time ever, we flew home with a hard drive of data ready to be analyzed, rather than a cooler full of samples awaiting processing. Now, as I am back on land waiting out the human COVID-19 disease, I am actively working through some of these data so that we can learn more about the unprecedented coral disease that is hurting reefs across the Caribbean.

Thank you to the scientists that helped conduct this research, Amy Apprill, Lei Ma, and Carolyn Miller, and to the scientists in Marilyn Brandt’s lab at the University of the Virgin Islands for making the research possible. Research was supported by The Tiffany & Co. Foundation.

Kalina Grabb studies some of the ocean’s most reactive chemicals