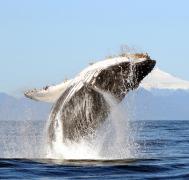 MIT’s Greg Britten explains the benefits and necessity for increased conservation efforts, and why this grand challenge for humanity is an achievable step to a sustainable future.

As the largest ecosystem on the planet, the ocean provides incredible resources and benefits to humanity—including contributing 2.5% of global GDP and 1.5% of global employment, as well as regulating our climate, providing clean energy, and producing much of the oxygen we breathe. But exploitation and human pressures—like pollution, overfishing and climate change—have stressed its life-support systems, depleting biodiversity, reducing habitats, and undermining ocean productivity.

Study and public awareness of the of these problems, as well as the beauty of these ecosystems, has led to conservation efforts beginning in the 1980s. By that time, however, significant damage had been done and some losses were permanent. Years of increased management and international policy since then have made measurable gains. At the same time, growing human populations are leaning harder on ocean resources.

Understanding the critical need to rebuild these habitats and species populations has reached the level of the United Nations, which instated the Sustainable Development Goal 14 to “conserve and sustainably use the oceans, seas and marine resources for sustainable development.” The effort sets benchmarks and indicators of environmental successes in the area but threats, both local and international, persist and in some cases are worsening.

In a new Nature review paper, Greg Britten, a postdoctoral fellow in the MIT Department of Earth, Atmospheric and Planetary Sciences (EAPS) and his colleagues examine different aspects of marine life and argue that aggressive interventions could lead to recovery of marine life by 2050.

Q: What is the current state of the world’s marine life and what recovery efforts have been attempted in the past?

A: While marine populations have been exploited throughout all of human history, the rate and magnitude of exploitation expanded exponentially between the 1950s and 1990s, largely due to the advent of industrial-scale fishing technology and large-scale habitat destruction via development of coastal areas. By the year 2000, it was estimated that the oceans’ “big fish” (tunas, large sharks, and billfish) were depleted by 90% relative to pre-exploitation levels. Further, approximately 60% of the world’s fisheries were considered “collapsed,” meaning that catches were at, or below, 10% of their historical maximum. At the same time, habitat destruction reached unprecedented levels – particularly in coastal areas.

These findings caused a tremendous response when revealed to the public that led to widespread calls for conservation intervention. Since then, marine exploitation has been significantly curtailed in much of the developed world, to a point where levels of exploitation are widely considered “sustainable”. Major global policy initiatives, like the Convention on the Trade of Endangered Species (CITES) and improvements to the Clean Water Act also significantly reduced conservation threats like pollution, as well as the implementation of the International Convention for the Prevention of Pollution from Ships.

Q: Tell us about your assessment of various interventions and potential future outcomes. What efforts have been successful so far, and where is there room for improvement?

A: We used a very large synthesis of available data to calculate historical and future trajectories of depleted marine populations under various levels of exploitation globally. We also documented the rates of recovery of habitats and ecosystems after pollution reductions and remediations were implemented.

We found that conservation and pollution reduction efforts, along with global environmental policy initiatives, have had a strong net positive influence on the recovery of marine populations, habitats, and ecosystems. We documented many cases of coral reef and mangrove recovery after local pollution remediation efforts. These occurred on a similar time scale as fish stocks, ranging from one to two decades for saltmarshes, to 30 years to a century for deep-sea corals and sponges that grow more slowly and are facing climate change, trawling, and oil spills. Globally, our research showed that the number of species listed as endangered by the International Union for the Conversation of Nature (IUCN) decreased from 18% in 2000 to 11.4% in the 2019, while the area of Marine Protected Areas (MPAs) increased from 0.13 million square kilometers to 27.4 million over the same period. These MPAs help protect multiple layers of the ecosystem, from coastal habitats to fish and megafauna species. The switch to unleaded gasoline in the 1980s reduced marine lead concentrations to those comparable to the time before leaded gasoline was introduced, due to the relatively low residence time of lead in marine surface waters.

Going forward, we found the vast majority of populations and habitats (with available data) could be rebuilt based on documented recovery rates by the year 2050, if exploitation is not increased beyond current levels. However, large scale environmental agreements were most successful in developed countries, whereas enforcement and financial commitment was generally poorer in developing countries. Marine environmental “success stories” were generally of smaller scale in the developing world and often involved the intervention of international, non-governmental organizations.

Our analysis of recovery times showed that there are reasons for hope. Assuming that there’s a 2.95% annual recovery rate across ecosystems and provided conditions aren’t depleted to less than 50% of their original level, we estimate that, on average, 90% of the original ecosystem could be regained in about 21 years—what we would consider a “substantial recovery”. However, since pressures like climate change and plastic pollution are increasing, and species and habitats are on the decline, more time is needed for recovery. Taking into account uncertainties associated with poor data coverage and varied national commitments, we believe it is possible to rebuild the vast majority of depleted marine populations and ecosystems (50- 90%) by 2050 – a goal we have labeled a “Grand Challenge for humanity”.

Q: What are barriers to recovery and why is it critical to act now to find a way around them for humanity and the planet?

A: Lack of consistency in national marine commitments, funding, and regulations around the globe is perhaps the largest barrier to marine population and habitat recovery. For example, many nations differ in their fishing policies, in and around MPAs, which means that migratory populations like Bluefin tuna and large sharks may be protected across much of their habitat while also encountering areas where fishing policies are less stringent, which can significantly slow rebuilding efforts.

Since developing nations lack conservation capacity and financial resources, we argue that enhancing the regulatory power of international bodies such as CITES and the United National Environment Program has the potential to solve these issues. But, it will require concerted effort among all countries, along with significant financial commitments, to improve and enforce these agreements internationally. However, achieving the desired results may be problematic if groups are failing to meet commitments to existing problems, like the Paris Agreement with climate change—an issue that affects whole ecosystems, causing species displacement and mass mortalities, and dictates rebuilding efforts.

If international, regional and local communities prioritize “blue infrastructure” and marine life, the societal benefits and economic return by 2050 would be numerous. For every dollar invested, yields would be ten dollars and over a million jobs. Revitalized fish populations, supported by policies and incentives, would see a huge jump in profits while improving overall health and sustainability of life in the area. Worldwide, the seafood profits would increase $53 billion. Further, $52 billion would be saved by restoring wetlands, which control storm surge, flooding, subsistence and assist with climate change. Multi-tiered, complementary strategies, accountability and buy-in can make this an achievable goal.

This research was supported, in part, by the Simons Collaboration on Computational Biogeochemical Modeling of Marine Ecosystems/CBIOMES.