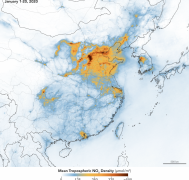 Emission levels of some pollutants dropped during COVID-19 shutdowns, but MIT Professors Colette Heald and Jesse Kroll say that’s not the whole story when it comes to air quality and human health.

Photos from cities around the world showed blue skies instead of smog during COVID-19 shutdowns. The unusually clear air was partly the result of drastic drops in vehicle emissions, especially nitrogen dioxide (NO2), that helped to fuel a flurry of media attention and research articles about better air quality during COVID-19 shutdowns. But improving air quality isn’t a straightforward matter of reducing a single pollutant like NO2.

In a recent Nature Chemistry Comment article, MIT professors and atmospheric chemists Jesse Kroll and Colette Heald highlight the critical and highly complex role that atmospheric chemical reactions play in ultimately determining air quality. Kroll, who has joint appointments in the departments of Civil and Environmental Engineering (CEE) and Chemical Engineering, uses laboratory-based studies to understand how organic compounds chemically change in the atmosphere. Heald, who holds appointments in both CEE and the Department of Earth, Atmospheric and Planetary Sciences (EAPS), uses atmospheric modeling on a regional and global scale to investigate the key processes behind the composition of the atmosphere.

EAPS spoke with them about why having lower NO2 emissions during COVID-19 shutdowns doesn’t translate directly to better-quality air.

Q: How have COVID-19 shutdowns affected public conversation around air quality, and why is it a mistake to focus solely on NO2 emissions?

Kroll: With the pandemic, one of the immediate changes was that people were driving less. Fewer cars on the road means fewer vehicle emissions, including nitrogen oxides (NOx), which includes NO2 and nitrogen monoxide (NO). When satellite measurements started showing very large drops in NO2 levels, there were reports that air pollution was way down. But it's not enough just to track these emissions — you also need to think through all the subsequent chemistry that happens in the atmosphere.

When people think about pollution, they think about the things humans are putting directly into the atmosphere — the smoke from fires, or from chimneys or tailpipes. Those are what we call primary pollutants. But in the atmosphere, the presence of oxygen and sunlight leads to extra chemistry, and primary pollutants, like NOx, undergo different chemical changes. That chemistry can degrade the primary pollutants, but it can also form new products. We call those secondary pollutants. This includes ground-level ozone, formed when volatile organic compounds oxidize in the atmosphere in the presence of sunlight and NOx. There’s also PM2.5, solid or liquid particles of two and a half microns in diameter or smaller that can stay suspended in the air for long periods of time, a week on average. PM2.5 includes primary particles, like smoke out of a tail pipe, as well as some mechanically generated particles, such as dust or sea spray. But the majority of PM2.5 is formed from these secondary processes in the atmosphere: primary pollutants float around in the gas phase, but then they get oxidized in the atmosphere and become “stickier.” The products, like sulfate, nitrate, or oxidized organic compounds, end up condensing on any surface they can find, contributing to secondary PM2.5 mass. Such secondary pollutants can be extremely harmful to human health — worldwide, the inhalation of PM2.5 and ozone may lead to as many as 8 million premature deaths per year.

Q: How important is it for policymakers to consider the whole complex system, rather than just NO2 emissions? How might this play into air quality regulations around the world?

Heald: The atmosphere is a whole soup of different constituents. Because that mixture can be so different in different places, the air quality response may not be the same for the same change in emissions. For example, in some places with decreased NO2 emissions during shutdowns, there were actually increases in ozone. There were some comments that this was surprising — but it’s really not that surprising. It’s chemistry that we've known for decades. We commonly observe this in what we call “the weekend effect.” Fewer commuters means fewer NOx emissions from vehicles, and that can lead to higher ozone levels on the weekend.

NO2 has been such a focus because it is something we can see really well from space. This spring, it made for these very nice, compelling visuals — a geographical image that showed first the shutdown in China, and then Italy, and then in other countries. It was a clear visual association that made it very easy for people to understand the effect. But it’s just a partial snapshot of what's going on in the atmosphere.

The danger is that policymakers might look at a satellite image of reduced NO2 concentrations and then misinterpret that to mean that NO2 itself is a stand-in for air pollution health impacts. NO2 does impact respiratory health, but different places around the world have different concerns in terms of leading pollutants. In most of the world, including the U.S., we are more concerned with ozone and PM2.5. We don’t have a big air pollution problem associated with NO2. But, for example, diesel vehicles have traditionally emitted more NOx — think about the Volkswagen scandal — and so a lot of cities in Europe have higher NO2 concentrations.

So, when it comes to policy and decision-making, reducing NO2 regulation might be really great in one location, and help address the main pollution concern there. But for other locations it could be completely unassociated. Or, in fact, if you took NO2 reduction too far you could get an inverse response and create more problems.

Heald: It's hard to untangle, in the atmosphere, how different sources are contributing to the pollution issues that are relevant to a certain area. With COVID-19, we had almost a complete shutdown of certain sectors, like not having vehicles on the road. We know exactly what happened, and when it took place – a chain of events that spread from location to location. So, we had this experiment that happened on large regional scales with a very precise timing. From analyzing that data, we’ll be able to understand a lot more about these changes in specific sectors, and see the air pollution response to that change. More broadly, we can use the data to understand this complex chemical environment in different places — seeing if there was an increase or decrease in things like ozone or PM2.5, and how we associate that with whatever changed in that city or location around the world.

Kroll: A good chunk of the atmospheric chemistry community has been paying attention to this event. People have been taking measurements with a whole range of tools — from regulatory-grade monitors to satellite images to low-cost air quality sensors. But also people have been using research-grade equipment, allowing them to measure the detailed mix of different volatile organic compounds, or the chemical composition of PM2.5, and how these have been changing over the course of the pandemic. By taking those measurements and carefully analyzing them in terms of the different factors that can contribute to such chemical changes, we can gain a lot of insight into the response of these secondary pollutants to specific emissions changes. These will hopefully lead to an improved understanding of atmospheric chemistry, and a better idea of what the atmosphere might look like in a future world with lower emissions.

Story Image: Downtown Los Angeles is normally very smoggy, as seen here, but with less traffic on the roads during the pandemic, the visible air pollution subsided. Other cities like Beijing still have smog issues. (Credit: pxfuel)