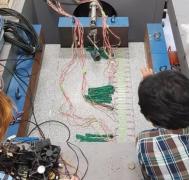 Laboratory investigation of partial rock melting and deformation helps us appreciate how seismic waves propagate within our planet during tectonic movements.

I am a rock squisher. Working with EAPS Assistant Professor Matěj Peč, I study the properties of partially molten rocks in Earth’s mantle while they experience stress and undergo deformation (a change in the rock’s physical properties like size, shape, crystalline structure or volume). We use huge machines to heat rock samples to high temperatures while we compress them to conditions similar to those found just below the Earth’s crust in a region known as the upper mantle. As far as we know, the Earth is the only planet with plate tectonics. By studying how rocks in the mantle respond to deformation, we can better understand what makes Earth’s interior unique. More specifically, we can explore regions like subduction zones and mid-ocean ridges, where melting is prevalent and where the signals we use to infer mantle flow direction are currently difficult to interpret.

The inside of the Earth is complicated, and we can’t drill down to watch rocks interact in real-time and in fine detail. Our best chance to understand what’s happening below Earth’s surface is to interpret the signals recorded by seismic surveys by replicating tectonic processes in the lab and recording the seismic signals they create. We can then compare the lab-made processes – and the specific seismic signals they produce – to the observations originally obtained by researchers in the field.

My specific project focuses on olivine-basalt aggregates, important analogues for partially molten rocks in the Earth’s mantle. Partially molten rocks are frequently involved in tectonic activity worldwide, so studying their properties in the lab gives us a good window into what we might expect to see in natural rocks across the planet. At the temperatures we use during experiments, the basalt particles melt and move as a liquid, while the olivine crystals stay solid and change their preferred orientation.

Olivine is a light green mineral that makes up most of the mantle on Earth and other planets. Generally, olivine crystals do not have a crystallographic preferred orientation unless deformed at the right conditions by mantle flow. Factors like water content, temperature, stress magnitude, and pressure influence the alignment of the crystallographic axes. We have simple relationships between the orientation of the crystallographic axes and seismic signals that allow us to infer the mantle flow direction far away from tectonically active regions. However, these relationships do not hold everywhere! This is particularly noticeable near subduction zones, where the seismic signals we record imply that mantle flow sharply turns to become parallel to the trench – a geodynamically unlikely scenario.

In the region of the lithosphere that we study, many different mechanisms can cause rocks to deform in both brittle and ductile ways, even in the same geologic event. We can see a change in seismic signals depending on how the olivine crystals are oriented, and what mechanisms they use to get there. Adding basaltic melts complicates the deformation even further. This means that the seismic signals we receive have many different potential sources, including cracks, a change in crystal orientation, or alignment of melt.

Analyzing the melt distribution and olivine crystallographic orientation in rocks squished in our lab under controlled conditions provides us with direct observations on which processes could be causing those seismic signals and how much each can contribute.

Placing rocks under extreme stress is dangerous and tricky work; small errors in the setup lead to lab disasters. A misplaced thermocouple can mean your entire sample burns up, and a slight bump in the sample setup can result in a huge, potentially destructive stress gradient. Because of this, it’s important that the samples we start with are as close to perfect as possible. However, rock samples found in nature often contain imperfections. Additionally, no two natural rocks are the same, which makes reproducing experiments difficult. For this reason, we make our own “lithospheric” rocks, which are composed of fine-grained olivine with a small amount of mid ocean ridge basalt acting as a melt phase.

Thanks to a generous grant from the MISTI Ulvac-Hayashi fund, Matěj and I were able to travel to the University of Tokyo in the summer of 2019 in order to improve our starting materials. For two weeks, we joined the Takei-Hiraga Lab at the Earthquake Research Institute and created new rock samples for our tests. The Takei-Hiraga Lab has developed a technique that carefully heats and compacts our rocks to the right sample size before they can be heated, pressurized and squished on-site in our lab in a way that causes permanent deformation. This first step, which forms the starting material, is often referred to as hot pressing; it produces a large volume of a low-porosity solid sample. We only use about a millimeter of that material per test, so creating a large volume helps ensure consistency in the starting material from test to test.

In Tokyo, we made our starting materials with a technique called “spark plasma sintering”, which uses heating to bond powdered rock samples together.  It’s a fast, intense process that creates the samples more effectively, and at about one-twentieth the speed of traditional hot pressing. We were able to create and analyze enough starting material for at least 20 tests, which leaves me with a lot of squishing to do here at MIT.

Back with my new starting material, I have my work cut out for me. Once I deform these samples, we will analyze the orientation of the melt and crystals they contain and compare them to those of the starting material, as well as observations from nature and theoretical models.

This research can help us better understand the seismic profile of the Earth and how small-scale deformation in the lithosphere affects it. Since the orientation of crystals and melt is known to influence the seismic velocity of any waves that travel through a material, we hope to characterize the ways that both melt orientation and crystal orientation react to external stresses, and their influence on the seismic wave propagation during those stresses.

These results will have large implications for future seismic studies on our planet and others. If we are able to tease out the seismic signature of melt pockets and their orientation, we can better understand how much melt is present in the mantle of a given planetary body, and how it responds to applied stresses (tides and mantle convection, for example). This will help us learn more about planetary evolution and melt processes, and provide important links between Earth-based rock mechanics and planetary exploration.