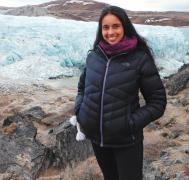 Meghana Ranganathan uses math and machine learning to improve how climate predictions are made.

Read this story in MIT Spectrum and at MIT News.

A siren wailed, prompting Meghana Ranganathan, age 6, to run to the closet in the guest room. She was armed with a stack of Calvin and Hobbes books and a glass of water. She closed the door behind her and waited out the tornado. “That would be my setup until I fell asleep in there, and then my mom would move me,” she says.

Ranganathan grew up in Dallas, where tornado watches and warnings happen a couple of times each year. Which means she took to that closet a lot. Once, in high school, she crammed into an office with 20 other students and a teacher for four hours, waiting out three tornadoes circling the area. It was later, in college, that her fear of storms transformed into something else. Ranganathan came to understand that “you can use math to represent the world around you.” In particular, she was taken with mathematical models that predict weather and climate—the very predictions that give the people of Dallas, say, a heads up that a tornado is brewing.

Today, as a graduate student in the Department of Earth, Atmospheric and Planetary Sciences (EAPS) at MIT, Ranganathan is focused on improving how models work. One approach is to meld an imperfect model (built primarily out of equations and assumptions) with an actual dataset (sparse and uncertain as it may be) to bring the model output into stronger alignment with reality. The technique can be “used to better recreate the past,” says Ranganathan, so that the future can be better anticipated. The goal is to apply what she’s learning to models of weather and extreme climate. “The big hurdle is being able to understand what’s going to happen with climate change,” she says. “If we run a climate model for 100 years, what is actually going to happen in 2100?”

Ranganathan has started to apply her theoretical work to a real-world problem: the movement and shape-shifting of ice sheets. Traditionally, researchers run a model of ice flow and compare it to observations of the position and velocity of a glacier over time. Inevitably, discrepancies arise, causing the model to be tuned and tweaked until it more closely mimics reality. But Ranganathan is attempting to enhance and perfect the model by also including the actual satellite data from glaciers in Antarctica.

Should all go well with her work, Ranganathan hopes to improve the certainty around what the future holds. But weather and climate are chaotic systems, making them difficult to predict by definition. One way that Ranganathan is tackling the chaos is through machine learning, where a computer teaches itself with little or no human input. Advised by Sai Ravela, an EAPS principal research scientist with a computer science background, she is using neural networks—a machine learning model roughly based on the connections in the human brain—to help tackle the vast amounts of data she’s dealing with. The hope is to speed up the effort and make it more accurate.

Ranganathan’s graduate work at MIT is possible because of financial support, including from the Callahan Dee Fellowship Fund. “The people who dedicate their resources to fellowships are enabling all of this amazing work that we do,” she says. “It’s what makes it possible for me to be here. I mean, the fellowship has been everything.”

Despite the imminent danger facing this planet, Ranganathan no longer runs to the closet to seek cover. Instead, she surrounds herself with people who help her make sense of it. There are the researchers in her department dedicating their lives to weather and climate “to help make the world a better place.” They give her hope. And there are the residents of polar regions themselves—people Ranganathan is already speaking with (in Greenland, for instance) to understand the full range of a community’s experience with climate change. They give her a reality check.

Last fall, the Intergovernmental Panel on Climate Change released a report stating that without action, the worst effects of a changing climate will occur within the next one to three decades. Which means: the siren is wailing. And Meghana Ranganathan and her colleagues are doing all they can to respond.

Pat Callahan ’75, SM ’77 and David Dee spent much of their adult lives in California, face-to-face with droughts and forest fires— local manifestations of a changing climate. But even before that, as an undergraduate majoring in mechanical engineering at MIT and a master’s student in the MIT Sloan School of Management, Callahan recalls experiencing the oil crisis of the 1970s. The environment “has been on my mind for forever,” she says. “It’s the worry about what we’re doing to the planet that’s so hard to bear, frankly.” Today, with a global climate crisis imminent, Callahan says, “it seems more pressing than ever that if you can do something, howsoever small, you try to do it.”

This thinking is what motivated the couple to create the Callahan Dee Fellowship Fund, which provides graduate fellowships to students in the Department of Earth, Atmospheric and Planetary Sciences. Recipients like Meghana Ranganathan and the other current Callahan Dee Fellow, Donald Martocello, are focusing their research efforts in the arenas of climate science and sustainability. Callahan, who recently retired as the chief administrative officer at Wells Fargo, hopes that the students receiving this funding “will do something important” that she and her husband couldn’t achieve otherwise. As she puts it, “the collective knowledge that a place like MIT can deliver to the world has to be part of the solution.” It’s why Callahan is donating to her alma mater, offering philanthropic funds to graduate students to work in fields that, in her view, are underfunded by the federal government at the moment.

MIT means a great deal to Callahan. “I loved going to school there, I had a good career when I left there, and I have very good feelings about the university,” she says. “There are really smart, motivated, hardworking people at MIT, and it feels like a good place to invest.” Funding these fellowships has allowed Callahan to take all the environmental issues she cares about— from plastics to warming seas—that she’s “pondered and thought about and read about to no avail over many, many years” and do something concrete about them.