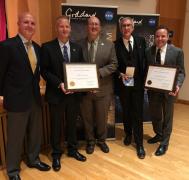 The honor recognizes the "stellar achievement" of the people behind the exoplanet-seeking satellite.

Read this at MIT Lincoln Laboratory

On September 5, NASA awarded a Silver Achievement Medal to the Transiting Exoplanet Survey Satellite (TESS) team. The award was presented during a ceremony at the NASA Goddard Space Flight Center as part of NASA's 2019 Agency Honor Awards.

The Silver Achievement Medal is given by NASA center directors in recognition of government and non-government individuals or teams for "a stellar achievement that supports one or more of NASA's core values, when it is deemed to be extraordinarily important and appropriate to recognize such achievement in a timely and personalized manner."

TESS was launched in April 2018 as the next step in NASA's search for exoplanets, which are planets outside of Earth's solar system. The four cameras aboard TESS were conceived, designed, and built by the MIT Kavli Institute for Astrophysics and Space Research and by MIT Lincoln Laboratory. Together, the cameras will gaze at 85% of the sky over the course of its mission, looking for discreet dips in light that signify that a planet is passing in front of a star.

"The team is continuing to work hard to find planet candidates in the TESS data, and new planet candidates that may help us answer some of the intriguing questions in exoplanets today," says Sara Seager, the deputy science director of TESS who is also the Class of 1941 Professor Chair in MIT’s Department of Earth, Atmospheric and Planetary Sciences (EAPS) with appointments in the departments of Physics and Aeronautics and Astronautics. "It’s been very time consuming but rewarding to be a leader on the mission."

George Ricker, TESS's principal investigator and senior research scientist at the MIT Kavli Institute, said that "the NASA Silver Achievement Medal recognizes the revolutionary impact that TESS is now having on the emerging field of exoplanets, as well as TESS’s revealing of exciting new insights in stellar and extragalactic astrophysics. The members of the TESS science and engineering teams can rightly be proud of the marvelous instrument which they have brought into operation in just five years from our mission’s selection by NASA. I am personally gratified to have been part of this impressive MIT-led team."

Lincoln Laboratory group leader Gregory Berthiaume, who served as the instrument manager for the TESS mission, added that he is proud and honored to be a part of the TESS team, and congratulated the "incredibly talented and dedicated staff who provided key technologies and capabilities that enabled the TESS instrument."

Approximately 250 MIT scientists and engineers are included as recipients of the Silver Achievement Medal for their role on the TESS team.

Since its launch, TESS has discovered two dozen new planets and 850 more potential worlds that have yet to be confirmed. Scientists expect TESS to discover thousands of new exoplanets by the time its mission is over.

TESS is a NASA Astrophysics Explorer mission led and operated by MIT in Cambridge, Massachusetts, and managed by NASA’s Goddard Space Flight Center in Greenbelt, Maryland. George Ricker of MIT’s Kavli Institute for Astrophysics and Space Research serves as principal investigator for the mission. Additional partners include Orbital ATK, NASA’s Ames Research Center, the Harvard-Smithsonian Center for Astrophysics, and the Space Telescope Science Institute. More than a dozen universities, research institutes, and observatories worldwide are participants in the mission.

Note: This story was adapted to include a comment from Sara Seager regarding EAPS' contributions to the mission.

This prestigious NASA Silver Achievement Medal is awarded to Government and non-Government individuals or teams by NASA Center Directors for a stellar achievement that supports one or more of NASA's Core Values, when it is deemed to be extraordinarily important and appropriate to recognize such achievement in a timely and personalized manner.

TESS Discovers Its Third New Planet, with Longest Orbit Yet

TESS Counting Down to Take-Off

Ushering in the Next Phase of Exoplanet Discovery