In a Spin: New Insights into the Beaufort Gyre

The Beaufort Gyre (BG) is a unique sea ice and water circulation component of the Arctic Ocean that rotates clockwise under the influence of prevailing anticyclonic winds. These winds act as a giant pump that collects low salinity water from the Arctic Ocean surface layer in the center of the gyre. 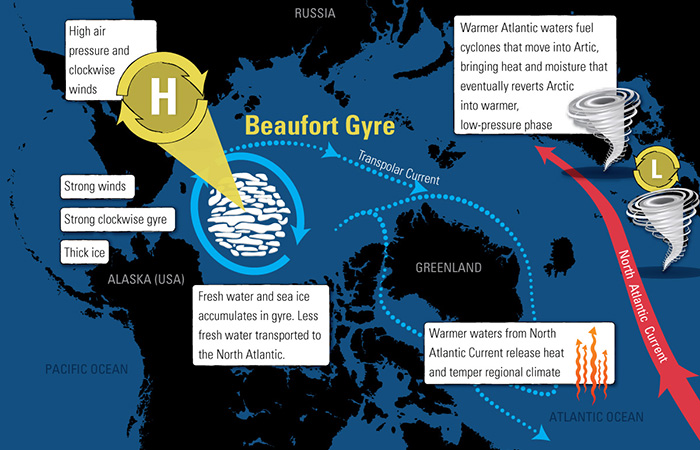 The Beaufort Gyre is just one of the interconnected movements of wind, ice and currents in the Arctic that influences the region’s climate. (Credit: Eric S. Taylor, Woods Hole Oceanographic Institution)

Currently, the BG contains about 23,300 km3 of fresh water. This volume is practically identical to the volume of water in Lake Baikal in Russia, and is comparable to the volume of all Great Lakes in North America. It would take five years for all Arctic rivers to fill the BG reservoir with its observed fresh water volume.

Although the Beaufort Gyre is located in the Arctic region, it has impacts on the climate further afield in two ways:

Scientists have been studying this region for many years. The Beaufort Gyre Exploration Program (BGEP) has been collecting data for the past 16 years and the first collection of papers describing BG as a climate system was published in JGR: Oceans in 2010.

In addition, the ten-year long Arctic Ocean Model Intercomparison Project (AOMIP) followed by the Forum for Arctic Ocean Modeling and Observational Synthesis (FAMOS) project have brought together scientists who observe, model and theorize about the Arctic marine and sea ice environment and contributed to better understanding of the BG phenomenon.

With many results from AOMIP published in Journal of Geophysical Research: Oceans special collections in 2007 and 2012, the tradition continues with another new special collection in 2019 presenting more than forty papers on the results of FAMOS and BGEP.

The majority of the papers are focused on the analysis of the Beaufort Gyre multicomponent system processes and mechanisms responsible for decadal, interannual and seasonal variability.

The 2003–2018 time series of the atmospheric, sea ice, oceanic, and biogeochemistry data collected by the Beaufort Gyre Observing System (BGOS) are publicly available at the project website and NSF’s Arctic Data Center. These data, combined with Arctic coupled ice-ocean modeling, have been used to: investigate the major causes, consequences and rates of BG freshwater accumulation and release events; identify the major sources of fresh water and the fresh water pathways from the sources to the BG region; explain the major patterns and regimes of the surface, Pacific and Atlantic water layers circulation; and to reveal the physics of mechanical and thermal mixing under influence of wind, internal wave and tidal forcing. 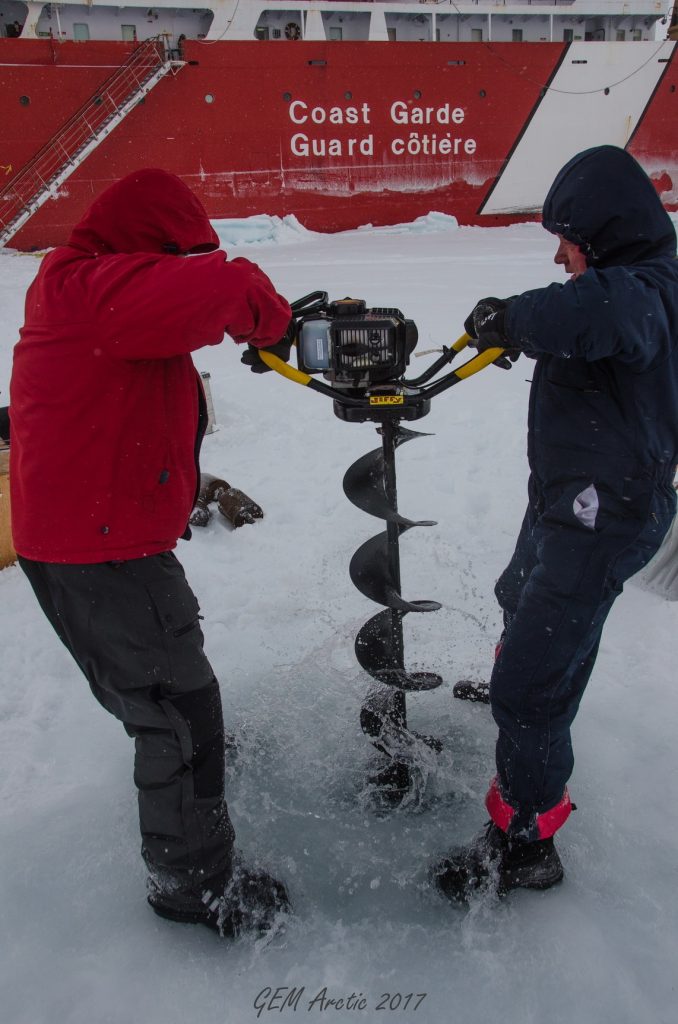 Other papers in the collection examine the role of sea ice conditions, major features of ice variability and methods of sea ice prediction in the BG. Ecosystem and biogeochemistry analysis targeting estimation of biological production rates in both water and sea ice, and characteristics of dissolved organic and inorganic matter are another focus, with papers employing synthesis of multi-model experiments in combination with collected data analysis.

Meanwhile, several papers describe processes of the BG relationship with the northern parts of the Pacific and Atlantic Oceans showing how the BG region influences, and is influenced by, climate change including the increase of Greenland glacier melting and modification of Atlantic water circulation.

Methodologically, a new approach known as “Arctic climate response function” analysis is used in several papers to better understand processes of the Arctic and subarctic variability and to predict causes and consequences of future Arctic changes.

As demonstrated in this special collection, the coordinated cross-discipline community approach to the analysis of Arctic processes is an optimal way to assess the degree of uncertainty in the results and conclusions made by different scientific teams.

One of the highest impacts of this special collection is educational because it provides guidelines for critical analysis of the existing data, models, and methods, and encourages new generations of Arctic scientists to improve understanding and predicting of Arctic changes.

Story Image and drilling image: An international team of observers, theoreticians, numerical modelers, engineers and icebreaker crew members from the USA, Canada and Japan studying the Beaufort Gyre from their base on the CCGS Louis S. St-Laurent. (Credit: Gary Morgan). Drilling through ice in preparation for deployment of an Ice-Tethered Profiler Buoy. (Credit: Gary Morgan)

In the collection: A Three-way Balance in The Beaufort Gyre: The Ice-Ocean Governor, Wind Stress, and Eddy Diffusivity