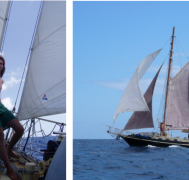 In his 20s, Janni Yuval sailed across the Pacific. Today, his research focuses on using data-driven approaches to build better, ‘smarter’ climate models.

Janni Yuval knows what it feels like to be a small speck in the vast, unrelenting waters of the open ocean.

At the age of 22, Yuval, who did not yet have his bachelor’s degree, decided to sail across the Pacific. At the time, Yuval was wrapping up a 2-year backpacking excursion around South America. Feeling land-locked and in dire need of a change in scenery, Yuval, who had been a sailing instructor as a teen growing up in Tel Aviv, Israel, looked for a boat that could carry him to another continent.

The small sailboat he found was a replica of the one used by Joshua Slocum, an early 20th century American explorer who was the first person to single-handedly sail the world. Unlike Slocum, however, Yuval would not go at his adventure alone. Also aboard were the boat’s owner, a 78-year-old British mariner, and another young wayfarer.

Still, the journey, which lasted for nearly a year, was arduous and isolating. At one point, Yuval and company were at sea for 37 days straight. The stretch was between the Galapagos Islands and Marquesas Islands—nearly 3,000 nautical miles—where there are no stops for land, or changes in scenery.

“The boat was a bit slow, so the whole trip took a little longer than planned,” says Yuval. “There are also parts close to the equator where you hardly have any wind, so that's why it took quite a while. It was still great fun though.”

Photos from Yuval’s days as a seafaring explorer show him much the same as he appears today as a Distinguished Postdoctoral Fellow in the MIT Department of Earth, Atmospheric and Planetary Sciences (EAPS): tall and lanky, head full of thick curly hair, and laid-back demeanor. From his office in the Green Building, Yuval jovially acknowledges that he did not take the most traditional path into climate research.

“I got a bit of a late start into academia,” says Yuval. “But I just had a feeling for adventure.”

Following his nautical adventures, Yuval dove steadfast into his studies. He received a bachelor’s degree in physics from Tel Aviv University before pursuing a master’s degree in theoretical physics and PhD in geophysical fluid dynamics from the Weizmann Institute of Science in Rehovot, Israel. His doctoral research on large-scale atmospheric circulation focused on storm tracks, or narrow streaks in the ocean where wind drives intense storms.

After his academic journey, Yuval joined the world of high-tech industry, first as an algorithm developer for an autonomous car company and then as a data scientist for a health care research institute. He never lost sight of his love of climate science, however, and kept close academic ties with the Weizmann Institute, co-authoring articles on atmospheric circulation and presenting at international scientific conferences.

“I like playing with data a lot,” says Yuval. “I think that’s been the common link between my careers.”

Today, Yuval is the first Houghton-Lorenz postdoctoral researcher at MIT. He is currently working closely with his mentor, EAPS Associate Professor Paul O'Gorman, and exploring collaborations with other EAPS researchers on how to use data-driven approaches to build better, ‘smarter’ climate models. One of Yuval’s main areas of interests is how to use machine learning to better represent small-scale atmospheric events, which could help provide a clearer picture of how climate will respond to future changes.

Clouds and atmospheric convection are the biggest sources of uncertainties in climate models today. Traditional climate models are incapable of including details of what's happening in the atmosphere down to the individual cloud or storm front—it simply would take too much computer power. As a result, researchers use empirical formulas, called parameterizations, to represent these tiny details in global climate models.

The question Yuval wants to investigate is whether machine learning can better emulate small-scale processes so that they can be included in global climate models without the need for additional computer power.

“Machine learning takes data and tries to learn from the data in a smart way,” says Yuval. “Let’s say you run a very expensive, high-resolution model, and a machine learning algorithm learns something from all that data. You can then incorporate that algorithm into a low-resolution model to get a faster and potentially more accurate climate model.”

In a way, Yuval says, it’s similar to his work on autonomous cars, where an algorithm is trained on vast amounts of detailed data—say, for instance, a picture of a street sign or car traveling in the opposite direction—until it is able to deduce the larger understanding of how roadways work and, eventually, how to get from point A to point B.

Yuval’s other research interests are similarly inspired by his post-academic industry work. For instance, he is interested in how to apply causal inference methods to climate science. Causal inference is a statistical method that asks whether something is, or is likely to be, the cause of something else. It’s a nascent field in climate science but is common in other areas, like health care, where Yuval was first exposed to it.

In health care, causal inference is used for a host of applications, one of which is to analyze whether a drug caused a particular side effect or whether the side effect is related to another factor, say, the patient's degree of disease severity at the time of taking the drug.

“The same question applies to climate science, ‘What led to some phenomena?’” says Yuval. “Let’s say El Niño is associated with drought in Australia—that could be a total correlation. We don't necessarily understand what the mechanisms behind it are.”

Yuval, who arrived in Cambridge, MA, this past February with his partner and their 11-month-old daughter, is excited to start work on these complex topics, he says.

Although his office in the Green Building is just meters away from the Charles River, which is speckled with sail boats, Yuval hasn’t ventured out to the water just yet. These days he is focused on a different adventure: searching for preschools for his daughter, using his data skills to advance the field of climate science, and returning to a science that has great personal meaning to him.

“I really love the ocean—and wind,” says Yuval. “And I have a personal attachment to this topic, so I feel very lucky to be here.”