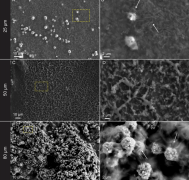 When it comes to making a lasting impression in geological history, the medium makes all the difference, especially in the Earth’s paleo-oceans. Here, during the Archean Eon (4,000-2,500 million years ago) and at times during Proterozoic (2,500 to 541 million years ago), when oxygen in the atmosphere and oceans was much lower than today, sedimentary minerals preserved signatures of biological activity in the form of fine textures created by microbial communities. The environmental conditions under which rocks like these form dictate how the crystal structure develops—the more orderly and fine-grained, the better the preservation.

Understanding, and better yet, replicating how these ancient minerals grew provides information about Earth’s past environments, and how organisms developed and behaved. One of these fossil-bearing rocks has proven difficult to copy in the lab, until now.

Researchers from MIT and Princeton University have found a way to emulate a part of ancient Earth in the lab by reproducing one of these weathering-resistant, information-carrying minerals, dolomite, whose formation has long perplexed scientists. A close relative to, and can be created from, minerals that make limestone, dolomite was pervasive in the past; however, researchers rarely find in modern environments. While it’s created from components commonly found in seawater, there are physical and kinetic barriers preventing the formation of dolomite—layers of carbonate (CO32-) ions with alternating central atoms of calcium and magnesium. Alternatively, studies have reported protodolomite—a rock with a disordered crystalline structure, occurring only in very salty modern environments—but this mineral does not preserve the same fine microbial textures as its more ordered brother.

“To look for evidence of ancient life and old processes, you have to look at microbial structures. that's where the information is. Some of that information is preserved in the form of very finely-grained dolomite, which precipitates almost as the microbes grow. It preserves the lamina of these microbial mats,” says Tanja Bosak, associate professor in the MIT Department of Earth, Atmospheric and Planetary Sciences (EAPS) whose lab led the research. Her group uses experimental geobiology to explore modern biogeochemical and sedimentological processes in microbial systems and interpret the record of life on the Early Earth. However, “there's a big problem about the origin of finely-grained dolomite in a lot of microbial structures through time: there was no clear way of making dolomite under Earth's surface conditions.”

Their results published in the journal Geology report the first creation of ordered dolomite and find that the trick to capturing these textures may be a slurry of manganese ions, seawater, light, and a biofilm of anaerobic, sulfur-metabolizing, photosynthetic microbes in an oxygen-free environment.

Dolomite problem and the importance of order

Since the first identification of dolomite in the 18th century in what is now known as the Dolomite Mountains of Northern Italy, scientists have been stumped by how dolomite forms, and why there is so much ancient dolomite and so little of the mineral in modern times. This issue was dubbed “the dolomite problem.”

Scientists have found that modern dolomite can form in two main ways. It precipitates when shallow, hypersaline seawater is heated, and when limestone encounters magnesium-rich water, like a deep reef that’s invaded by seawater solutions. However, both methods make large crystals that obscure much of the biological information. In modern seawater, however, aragonite and calcite (different crystalline structures of calcium carbonate) are more likely to precipitate out than dolomite. “It's not hard to make dolomite if you heat up a beaker of seawater to very high temperatures, but you'll never get it at the Earth’s surface temperature and pressure just on its own,” says Bosak. “It's really hard to get magnesium into the minerals; it doesn't really want to go into the crystal lattice.” That’s a portion of the larger picture. Additionally, these mechanisms do not account for mineral variations (manganese or iron-rich dolomite) seen during the Archean and Proterozoic periods that preserved these textures. “You see that seawater is saturated with respect to dolomite, [but] it just doesn't form, so there's some kinetic barrier to that.”

It wasn’t until the turn of the 20th century that a Russian microbiologist demonstrated the potential for anaerobic bacteria to cause dolomite to form from minerals in ocean water, a process called biomineralization. Since then, researchers have found that in modern environments, biofilms—containing photosynthetic microbes and the slimy organic matrix that they excrete for their home (exopolymeric substances)—in highly evaporative pools of salty water can provide a surface on which dolomite can nucleate and grow. However, these biofilms are not photosynthetic. In contrast, many microbial structures that were preserved before the rise of oxygen grew in less salty marine environments and are thought to have been produced by photosynthetic microbial communities. Additionally, the location of ions and microbes thought to be involved in this process likely differed in the past. The past microbes relied on sulfide, hydrogen or iron ions for photosynthesis. Researchers suspect that more than two billion years ago, manganese and iron ions were present higher in the ocean sediments or even the water column. Today, because of the oxygenated atmosphere, they’re buried deeper in sediments where anaerobic conditions can occur. However, the lack of sunlight means that microbial mats don’t grow here, so neither does dolomite.

While the suggestion of microbial involvement was a strong step to solving the dolomite problem, the matters of crystal ordering and formation in the sunlit marine zone, where microbes colonize sediments, were still unresolved.

While investigating early sedimentological preservation, the group performed a series of experiments replicating the conditions of these ancient oceans with an anaerobic atmosphere. They used a combination of modern biofilms, light/dark environments and seawater modified to mimic early Earth conditions with and without manganese, one of the metals often found in the mineral and thought to facilitate bacterial growth. The researchers used microbes from a lake in upstate New York, from depths that lack oxygen.

In their experiments, the researchers noticed something unexpected—that the most abundant mineral in the biofilms was highly ordered dolomite, and the vials that produced the most contained photosynthesizing microbes and manganese—a result consistent with field reports. As the mats grew up toward the light, crystals accumulated on them, with the oldest on the bottom capturing tiny wiggles where now degraded microbial mats used to be. The more extensive the coverage, the smaller the porosity, which reduced the chances of fluids infiltrating them, interacting with and dissolving the minerals, and essentially erasing data. The experiments lacking manganese or performed in the dark (not photosynthesizing) developed disordered dolomite. “We don't understand exactly why manganese and the microbes have that effect, but it seems like they do. It's almost like a natural consequence of those types of conditions,” says Bosak. Nonetheless, “It was a big deal to show that that can actually happen.”

Now that the team has found a way to make ordered dolomite, they plan to look into why it forms, variations, and how the rock records the environmental conditions it forms in. After seeing the effect that manganese had on dolomite, the researchers will look at iron ions, which integrated into these ancient rocks. “Iron also seems to stimulate the formation of the incorporation of magnesium into this mineral for whatever reason,” says Bosak.

They’ll also investigate the unique microbial interactions and physical properties present to see what components are essential to precipitating dolomite. The individual niches each anaerobic organism occupies seems to help the community grow, cycle elements, degrade substances, and provide a surface for crystals. The Bosak group will do this by fossilizing various organisms under the same or different environmental conditions to see if they can produce dolomite. During these experiments, they will monitor how well dolomite records the temperature at which it was made, as well as the chemical and isotopic composition of the surrounding solution to understand the process better.

"I think it tells us that—when we are trying to interpret the past—it's a really different planet: different types of organisms, different types of metabolisms that were dominant,” says Bosak, “and I think we are just starting to scratch the surface of what possible mineral outcomes, what kind of textural outcomes we can even expect.”

A look back in time