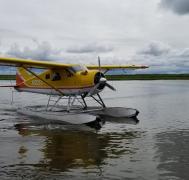 Radiation Beneath Our Feet

It’s two o’clock on a damp and chilly morning when the sun rises over the horizon, illuminating your tent with a bright orange glow. You re-adjust your bandana to cover your eyes, hoping to block out the light and sleep a few more hours, only to be woken up again at five by wailing loons and squawking ducks on the ponds nearby. You bundle up in sweaters and a hat, throw on your tall rubber boots, and march across the spongy groundcover of lichens and mosses to the food tent, where you can warm up with a thermos of hot coffee.

This is a typical morning at our field site in Alaska’s Yukon-Kuskokwim Delta, tens of miles from the nearest settlement. I travelled here with a team of other scientists and students in the summer of 2017. Why am I here – in a place that is only accessible by helicopter or float plane on a day with clear weather? I want to understand how the warming climate affects the tundra. In the same way that our bodies warm up with hot coffee and insulating clothing, Alaska has been warming too. In this case, the Earth has been heating up thanks to the heat-trapping blanket of greenhouse gases accumulating in the atmosphere. For the Arctic, this means that the vast stores of carbon in the perennially frozen ground, known as permafrost, are now thawing in two ways: the seasonally thawed layer on the surface is deepening each year. And, in some places, the ice-rich soils are thawing suddenly, causing the ground’s surface to collapse and form new lakes and ponds, as well as mudslides that pour into streams, depositing carbon-rich particles.

Those are some of the more obvious consequences of climate change, but what about a subtler one? I find the effects on water moving through the subsurface in this landscape to be fascinating. This slowly migrating groundwater is concentrated in carbon, nutrients, and metals because it interacts so closely with the soil. It can then move into lakes, ponds and streams, changing the chemistry of those waters and impacting local microbes, phytoplankton and other organisms that depend on this body of water. These organisms also help support the rest of the tundra food chain, like the numerous birds that the Yukon National Wildlife Refuge is famous for. Groundwater is also concentrated in gases like methane, which is a powerful greenhouse gas produced by soil microbes that break down bountiful amounts of carbon. Understanding where this water is going and what it is carrying helps paint a picture of the downstream effects of climate change on the Arctic and elucidate any environmental feedbacks that could exacerbate the problem.

To investigate this, one of the issues I am looking at is: Is this methane also entering lakes and ponds where it can be released to the atmosphere? If so, what else is in the groundwater that we can use to track it and quantify the amount of methane entering lakes? Uranium naturally occurs in rocks and soils, and slowly decays into radon – a gas that can find its way into the basements of homes—which dissolves in groundwater and moves with it just like methane. Radon is much more concentrated in groundwater than it is in lakes or streams because once it enters the lake, it decays quickly with a half-life of four days. It’s also released to the atmosphere. By measuring the amount of radon in groundwater and in a lake, I can calculate how much groundwater must be entering the lake and at what rate. Then I can use ratios of radon and methane in groundwater to quantify the amount of methane transported into lakes through groundwater flow.

This trip to the Yukon delta produced some interesting results. When I looked at methane, I found that the amount transported into lakes on the tundra was likely greater than that leaving the lake surface. Warming in the future may increase methane transport into lakes as the Arctic gets wetter and warmer, increasing groundwater flow. When this methane is released to the atmosphere, it can further contribute to the warming of our planet, so it will be important to study how warming continues to affect lakes in polar regions like this one.

In the fall of 2018, I returned to the Arctic, but this time ventured off the land and to the sea aboard the U.S. Coast Guard icebreaker Healy looking at the Beaufort and Chukchi Seas of the Arctic Ocean. On this research cruise, I also used radioactive isotopes to look at sediment-water exchange on the continental shelves, which serve as a natural laboratory for me to study the effects of permafrost thaw on the chemistry of the coastal ocean and the understudied fall and winter processes in the Arctic Ocean such as winter water formation, storm events, and transport across the broad continental shelves.