Read the full story at AGU

A new GRL study co-authored by EAPS Research Scientist Jason Soderblom examines hydrocarbon lakes on Saturn's largest moon, Titan, a cold place with a nitrogen atmosphere and hydrocarbon rain. The scientists observed that the lakes were bubbling, strong enough to create geologic features and wondered what conditions would be neccessary for this to happen. Erin I. Garcia de Jesus writes for AGU that "scientists have noticed bright spots in these lakes, which appeared in some pictures from NASA’s Cassini spacecraft and mysteriously vanished in others. They later theorized these 'magic islands' might be outbursts of nitrogen bubbles."

By simulating the environment of the lakes in a pressurized chamber, de Jesus notes, the scientists were able to pinpoint the "right combination of methane, ethane and nitrogen crucial for bubbles to form." Additionally, "explaining how bubbles form in Titan’s lakes now allows scientists to begin probing fundamental questions about how liquids behave on the moon. Of all the bodies in our solar system, few are more Earth-like than Titan, and it is one of the few places scientists think might have conditions necessary for extraterrestrial life." 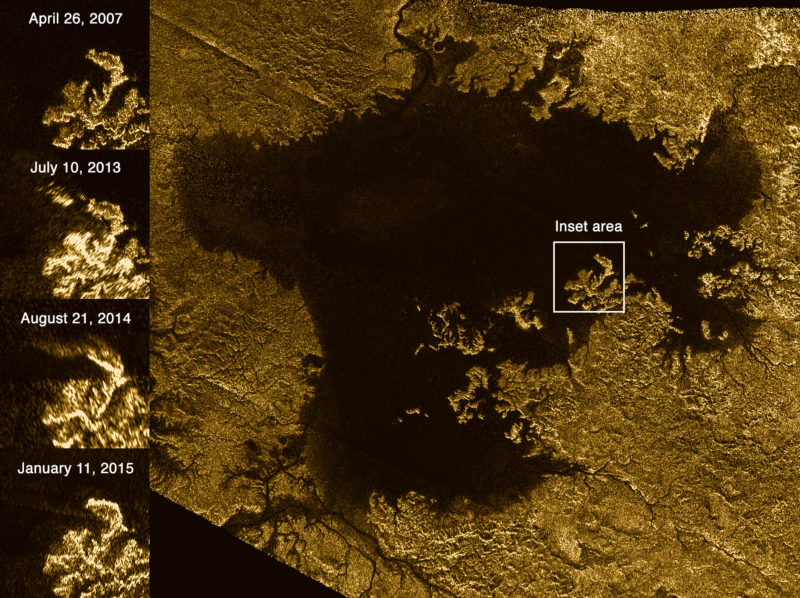 These images from the Radar instrument aboard NASA’s Cassini spacecraft show the evolution of a transient feature, informally known as a “magic island”, in the large hydrocarbon sea named Ligeia Mare on Saturn’s moon Titan. (Credit: NASA/JPL-Caltech/ASI/Cornell)