An image from the international Cassini spacecraft provides evidence of rainfall on the north pole of Titan, the largest of Saturn’s moons. The rainfall would be the first indication of the start of a summer season in the moon’s northern hemisphere.

Read this story at AGU. Adapted and reposted with permission.

“The whole Titan community has been looking forward to seeing clouds and rains on Titan’s north pole, indicating the start of the northern summer, but despite what the climate models had predicted, we weren’t even seeing any clouds,” said Rajani Dhingra, a doctoral student in physics at the University of Idaho in Moscow, and lead author of the new study accepted for publication in Geophysical Research Letters, a journal of the American Geophysical Union. “People called it the curious case of missing clouds.”

"This paper documents the only observations we have of active rainfall in Titan’s norther polar region and provides crucial clues into the timing of storms as Titan’s northern hemisphere moved into summer," said Jason Soderblom, a co-author and research scientist in MIT's Department of Earth, Atmospheric and Planetary Sciences (EAPS).

Dhingra and her colleagues identified a reflective feature near Titan’s north pole on an image taken June 7, 2016, by Cassini’s near-infrared instrument, the Visual and Infrared Mapping Spectrometer. The technique the researchers used leveraged previous work led by Soderblom--looking at the observed intensity of the specular reflection of sunlight off Titan’s surface to probe that surface. The reflective feature covered approximately 46,332 square miles, roughly half the size of the Great Lakes, and did not appear on images from previous and subsequent Cassini passes.

Analyses of the short-term reflective feature suggested it likely resulted from sunlight reflecting off a wet surface. The study attributes the reflection to a methane rainfall event, followed by a probable period of evaporation.

“It’s like looking at a sunlit wet sidewalk,” Dhingra said. 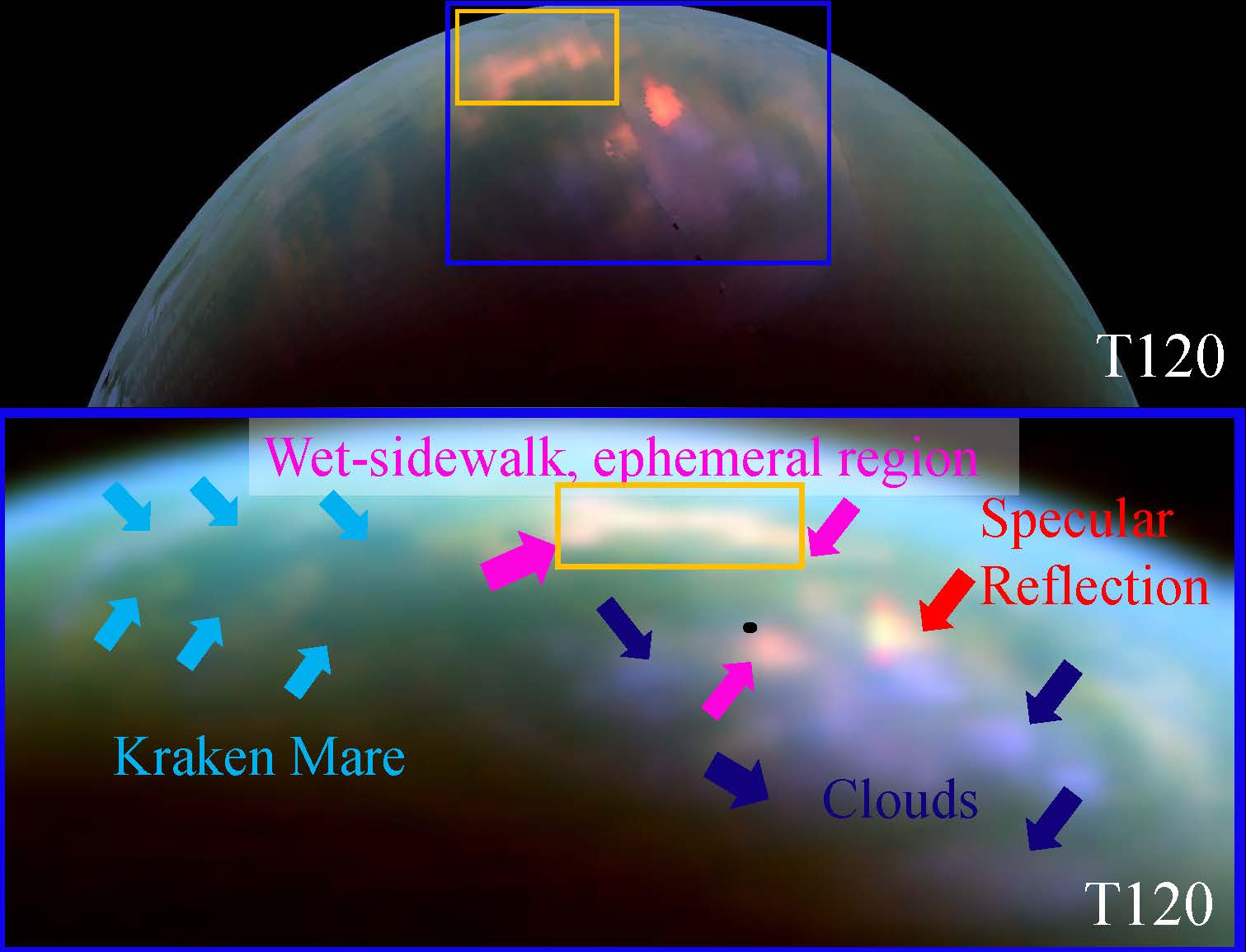 “We want our model predictions to match our observations. This rainfall detection proves Cassini’s climate follows the theoretical climate models we know of,” Dhingra said. “Summer is happening. It was delayed, but it’s happening. We will have to figure out what caused the delay, though.”

Additional analyses suggest the methane rain fell across a relatively pebble-like surface, Dhingra said. A rougher surface generates an amorphous pattern as the liquid settles in crevasses and gullies, while liquid falling on a smooth surface would puddle in a relatively circular pattern.

Dhingra is using the wet sidewalk effect to search for additional rain events on Titan as part of her research.

"Although the Cassini mission ended just over a year ago with the intentional disposal of the spacecraft into Saturn, we will continue to study the Cassini data," said Soderblom. "Researchers studying the dynamics of Titan’s atmosphere will now use these results to further constrain their models. Such models are important not only for understanding the evolution of Titan’s atmosphere and climate, but also in modeling atmospheric dynamics for future in situ Titan exploration, such as NASA’s Dragonfly mission."

Story Image: New research provides evidence of rainfall on the north pole of Titan, the largest of Saturn’s moons, shown here. The rainfall would be the first indication of the start of a summer season in the moon’s northern hemisphere, according to the researchers. (Credit: NASA/JPL/University of Arizona)

Dust Storms on Titan Spotted for the First Time

River Networks on Titan Point to a Puzzling Geologic History

Moon’s Crust as Fractured as Can Be

Retracing the origins of a massive, multi-ring crater