EAPS is happy to announce that Camilla Cattania will join the department as an Assistant Professor in July 2020. 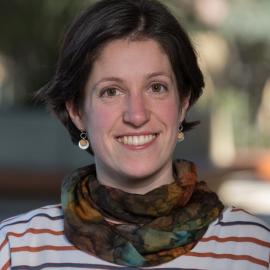 Camilla Cattania is a seismologist with experience in numerical modeling, earthquake physics, and statistical seismology. She has developed new models of aftershock triggering based on static stress changes and studied swarms drive by magmatic intrusions and dynamic triggering. A separate but complementary aspect of her research consists of analytical and numerical modeling of slip on a single fault. Cattania has applied ideas from fracture mechanics to investigate the interaction between seismic and aseismic slip on isolated asperities, a topic she is now exploring in a wider range of tectonic settings and including additional physical processes. Her research concerns tectonic earthquakes but is also pertinent to so-called micro-seismicity induced by human action, such as hydrocarbon extraction, waste water injection, sub-surface geological carbon sequestration, and geothermal energy production.

Cattania's theoretical and computational studies of earthquakes complement current research in seismology, geomechanics, and rock physics at EAPS and MIT’s Civil and Environmental Engineering, via the Earth Resources Laboratory.