Agency funds five-year effort to understand the potential for life in outer solar system and establishes a new Network for Ocean Worlds. Collaborator EAPS professor and oceanographer John Marshall is working with the team looking at ice moons.

The National Aeronautics and Space Administration (NASA) will invest in a major new research program headquartered at the Woods Hole Oceanographic Institution (WHOI) that pulls together some of the nation's leading experts in ocean and space research, as well as a new research network to facilitate ocean worlds research at academic and research institutions nationwide.

Speaking at the 2019 Astrobiology Science Conference (AbSciCon) in Seattle where the project was announced, lead investigator and WHOI senior scientist Christopher German described the focus of the Exploring Ocean Worlds (ExOW) project as one that would address a central question in astrobiology research today: "On which ocean worlds, and using which measurements, do we have the highest probability of finding life beyond Earth within the next human generation?" 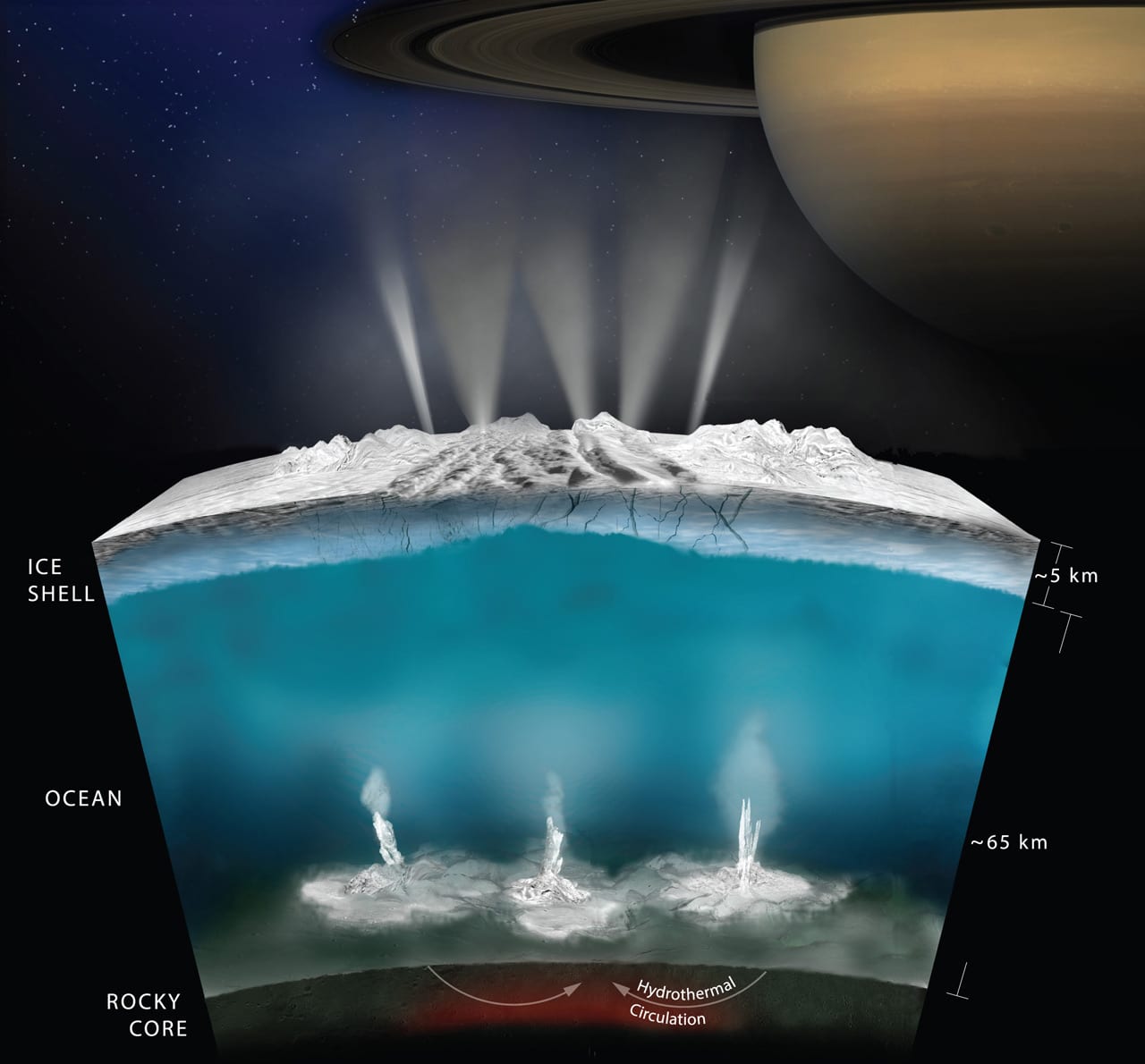 The project will form a cornerstone for NASA's new Network for Ocean Worlds (NOW), which was also announced today. NOW is an initiative aimed at accelerating research on planetary bodies with liquid water oceans that may harbor life or conditions that could support it by coordinating scientific studies nationwide that help advance understanding of ocean worlds. The network will be co-led by German, at WHOI, together with Alison Murray at the Desert Research Institute (DRI) and Alyssa Rhoden at the Southwest Research Institute (SwRI).

“If we hope to find evidence of life beyond Earth, within the next human generation, then our best bet is to look toward the growing list of ice-covered ocean worlds right here in our own solar system,” said German. “And looking further ahead, if we want to understand the range of possible conditions that could support life anywhere beyond Earth, then we will simultaneously need to both continue exploring our own ocean for examples of extremes under which life can exist and continue developing exploration technologies that will be useful on any ocean world, including Earth.”

Ocean worlds beyond Earth have been a key research focus for NASA’s Planetary Science Division ever since the confirmation of ice-covered liquid water oceans on Jupiter’s moons Europa, Ganymede, and Calisto and, subsequently, Saturn's moon Enceladus. NOW is the latest of four research coordination networks (RCNs) to be established by NASA, introduced today at AbSciCon, that will enable research covering different aspects of the search for life beyond Earth.

“Given NASA’s objective to understand the distribution of life beyond Earth, astrobiology will be the focus of a growing number of NASA’s science missions,” said Mary Voytek, NASA Senior Scientist for Astrobiology in a November 2018 NASA Astrobiology release announcing the establishment of the networks. “These new RCNs will contribute to fulfilling the program’s goals including enabling future missions to find habitable worlds and life.”

German will also lead Exploring Ocean Worlds, a $7.6 million, five-year project funded under NASA’s Interdisciplinary Consortia for Astrobiological Research. ExOW will include partners from 10 institutions across the U.S. including WHOI. Other oceanographic laboratories involved in ExOW include the Scripps Institution of Oceanography, the University of California Santa Cruz, the University of Minnesota, Columbia University’s Lamont-Doherty Earth Observatory, MIT, and Harvard University. From the space community, the team includes planetary scientists at Arizona State University, and NASA's Ames Research Center and Jet Propulsion Laboratory.

Ultimately, the ExOW team intends to construct a comprehensive theoretical model, informed and tested by experimental efforts, that connects a broad range of physical and chemical processes within an ocean system. The model will help determine the potential of that system to harbor life and to reveal evidence of that life to future NASA missions.

“Our approach is designed to provide a predictive framework applicable to all ocean worlds of this type, but will have clear, immediate and direct relevance to two high priority astrobiology targets: Europa and Enceladus,” said German. The project is designed to be completed just in time for the launch of Europa Clipper, NASA's next major mission to an ocean world, which is currently scheduled for launch in the early 2020s.

Story Image: This artist's rendering shows Cassini diving through the Enceladus plume in 2015. New ocean world discoveries from Cassini and Hubble will help inform future exploration and the broader search for life beyond Earth. (Credit: NASA/JPL-Caltech) 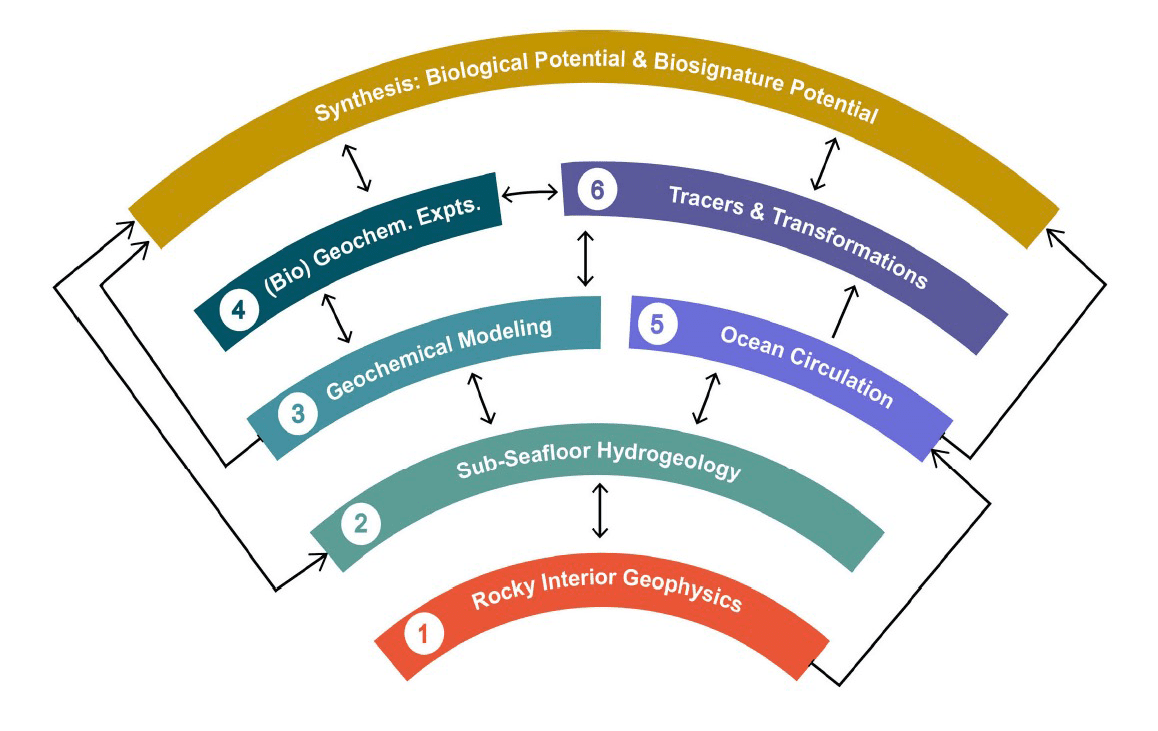 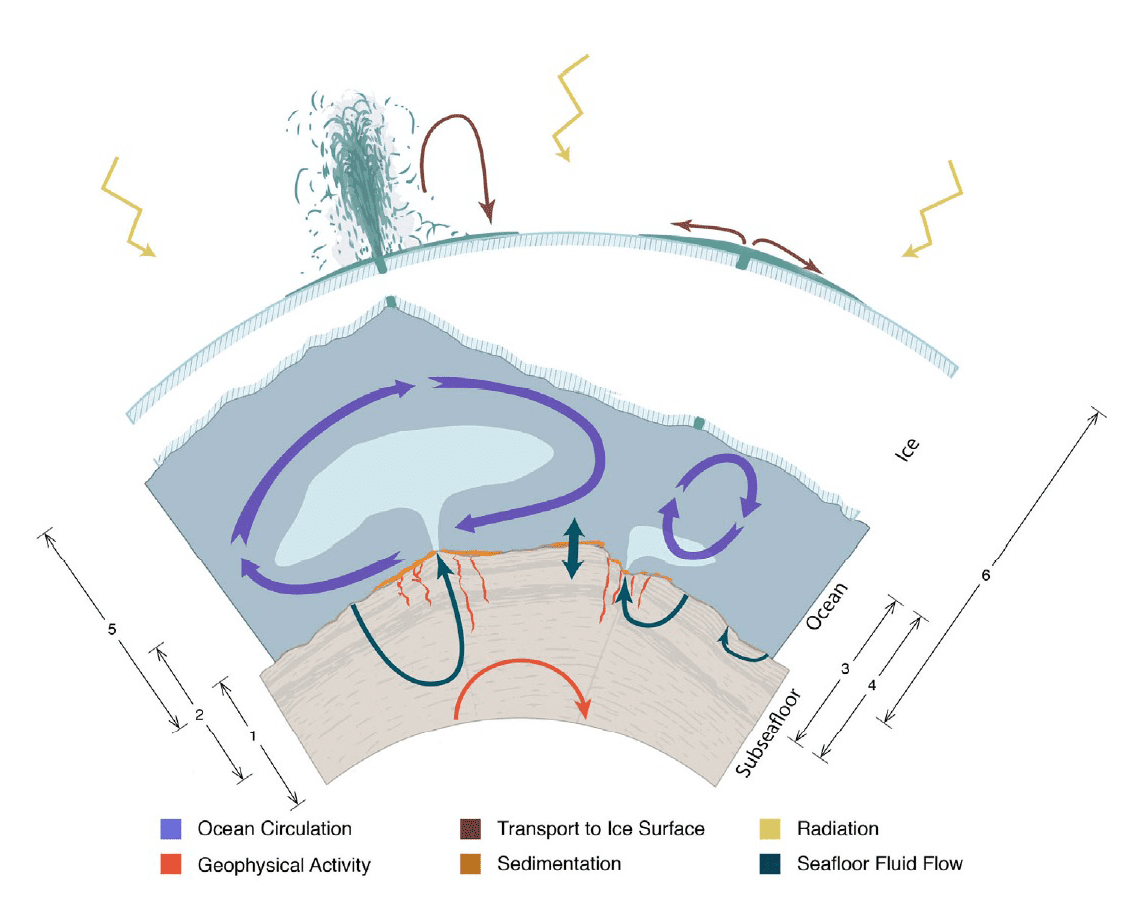 Organizational diagram describing how the project will proceed through a series of 6 interconnected, interdisciplinary Investigations leading to project-wide Synthesis Activities that will assess both the biological potential and the biosignature potential of ocean worlds.