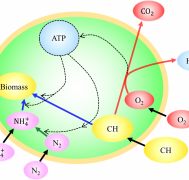 A Model for Nitrogen Fixation in the Presence of Ammonium

The model provides a quantitative framework which can be employed in ecosystem and biogeochemistry models.

Nitrogen fixation, the conversion of dinitrogen gas to bioavailable nitrogen, is carried out by diverse prokaryotes termed diazotrophs. It plays a fundamental role in maintaining the productivity of aquatic and terrestrial environments both locally and globally.

The development of quantitative, mechanistic models with which to interpret and predict the biogeography and rate of nitrogen fixation and their relationship to environmental factors is a significant challenge for carbon cycle and climate modeling. However, important questions and opportunities for quantitative modeling remain that will affect our predictions and interpretations of the biogeography of nitrogen fixation in the ocean. For example, do nitrogen fixers also consume fixed nitrogen, and do they continue to fix nitrogen in the presence of fixed nitrogen?

In their recent paper published in PLoS One, Keisuke Inomura (a former EAPS member with the Follows group), CBIOMES investigator and EAPS professor Mick Follows, and co-authors Jason Bragg (National Herbarium of New South Wales, Australia) and Lasse Riemann (University of Copenhagen, Denmark), detail their new model seeking to address these issues. Inomura is now a Simons Postdoctoral Fellow in Marine Microbial Ecology at the University of Washington exploring mathematical models of the distribution of different nitrogen-fixing microbes in the ocean,

Nitrogen fixation provides bioavailable nitrogen, supporting global ecosystems and influencing global cycles of other elements. It provides an additional source of nitrogen to organisms at a cost of lower growth efficiency, largely due to respiratory control of intracellular oxygen. Nitrogen-fixing bacteria can, however, utilize both dinitrogen gas and fixed nitrogen, decreasing energetic costs. Here the authors present an idealized metabolic model of the heterotrophic nitrogen fixer Azotobacter vinelandii which, constrained by laboratory data, provides quantitative predictions for conditions under which the organism uses either ammonium or nitrogen fixation, or both, as a function of the relative supply rates of carbohydrate, fixed nitrogen as well as the ambient oxygen concentration.

Inomura and Follows model reveals that the organism respires carbohydrate in excess of energetic requirements even when nitrogen fixation is inhibited and respiratory protection is not essential. The use of multiple nitrogen sources expands the potential niche and range for nitrogen fixation. The model also provides a quantitative framework which can be employed in ecosystem and biogeochemistry models.