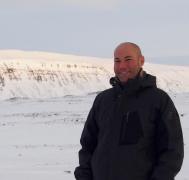 From the Marines to MIT

EAPS Assistant Professor Brent Minchew has flown presidents and foreign dignitaries on Marine One. Today, as leader of Glaciers at MIT, he searches for clues on how ice sheets evolve and respond to changing climate.

It has been more than a decade since Brent Minchew donned his Dress Blues, but mementos of his days as a Marine are peppered throughout his office at the MIT: a photo with Al Gore taken at Andrews Air Force Base in January 2001, a matte army-green road bike propped up the corner, his shaved head and stature, and, best of all, some spellbinding stories.

In 1995, Minchew enlisted in the Marines straight out of high school. He was 17 and chasing a life of adventure and purpose.

“I grew up in a very small-town mindset, so I'd seen only one very small subset of culture,” he says. “I wanted to see the world and I wanted to understand how other people lived.”

After basic training, Minchew was chosen to join HMX-1, the squadron responsible for flying the President of the United States, Vice President, and other heads of states and Department of Defense officials. It wasn’t exactly the life of adventure he desperately sought, but it is one of the highest honors to which an enlisted Marine can aspire. Now, with the clarity of time, Minchew recognizes the historic significance he was privy to.

Ahead of international peace talks, Minchew flew officials to Camp David on the Marine One aircraft. On September 11, 2001, his squadron responded to the Pentagon, where they were charged with transporting important personnel and papers to Camp David for safe keeping.

Months later, by his own volition, Minchew joined the 26th Marine Expeditionary Unit and shortly afterwards was deployed, first to Mosul, Iraq, and then to Djibouti on the eastern horn of Africa. For his final posting, Minchew was stationed in Monrovia, Liberia in the midst of the Second Liberian Civil War, arriving just ahead of the UN peacekeepers. After nearly 8 years in the military, Minchew finally found himself doing the humanitarian aid work for which he had originally joined.

“That was a really fitting end to my career as a Marine,” Minchew says.

Today, Minchew’s daily responsibilities are a far cry from flying helicopters full of foreign dignitaries. Minchew is an assistant professor in the Department of Earth, Atmospheric and Planetary Sciences (EAPS) at MIT, researching ice sheet dynamics and leading the Glaciers at MIT research group, where he heads a team looking at the mechanisms of ice, hoping to solve the most complex problems in one of the world’s formidable environments.

“I kind of took a non-linear approach to life,” he readily jokes.

Non-linear as his career may be, the common thread through Minchew’s path from the Marine Corps to MIT is a determined pursuit of adventure and insatiable curiosity for the extreme, only partially understood places on Earth—a trait he attributes in large part to his childhood in Texas.

Minchew was born in Pasadena, Texas, a small working-class town just southeast of Houston, where his mother was a computer programmer at NASA’s Johnson Space Center, a place that provided an early taproot for his love of the sciences.

“I would go to work with her and get to hang out on the actual Space Shuttle mockup, where the astronauts trained,” he says. “It was the best childhood ever.”

When his family moved to a small town north of Dallas, Minchew brought with him a fascination of flying, an ardent admiration of John Glenn, and, perhaps most notably, a curiosity for how helicopters worked. Joining the Marine Corps, he says, perfectly wrapped all those things together.

“It was just so obvious that that's what I wanted to do,” he says.

When his military service ended in 2004, Minchew returned to Texas to spend time with family and start an academic career, taking classes at the University of Texas at Dallas as physics major before transferring to the University of Texas at Austin to major in aerospace engineering. As a master’s student in orbital mechanics, Minchew planned to design spacecrafts to complete sample return missions from Enceladus, a moon of Saturn with geysers.

His interests soon shifted, however, when a professor introduced him to Interferometric Synthetic Aperture Radar (InSAR) remote sensing, a type of radar that measures motion by calculating the change in phase of the radar waves between two separate images.

“To me, it was roughly equivalent to having something like 10 million GPS stations scattered all over the ground. I just thought it was absolutely fascinating that you can measure deformation at centimeter-scale accuracy over huge areas with really high precision and very high resolution,” Minchew says. “As soon as I saw it, I had to know more.”

Minchew quickly changed his master’s focus to remote sensing and then, perhaps unsurprisingly, choose the most adventurous area to study: glaciers, in particular, Antarctica.

“Antarctica is like this sense of inherent adventure,” he says. “It's impossible to think of Antarctica and not think of adventure.”

Minchew left Texas for another Pasadena, heading to CalTech to complete a PhD in geophysics. At CalTech, Minchew worked under geodesy expert Mark Simons, before joining the British Antarctic Survey as a postdoc, hoping for the chance to see the glaciers of Antarctica in person. However, the year he planned to make the trip, there was a major fracture in the ice that endangered a British research station, forcing him to stay back.

Today, Minchew is one of the country’s leading experts on ice sheet dynamics, a topic he has an infectious passion for and speaks about animatedly, with the ever-slightest Texan twang.

“I think a lot of people tend to mistake the ubiquity of ice with some sense that it's sort of a normal and typical material but it's not,” he says. “It's a fascinating material with all kinds of interesting properties.”

For glaciers, he explains, that has all kinds of interesting dynamical implications that inform how ice sheets evolve and couple into the climate system. Last January, Minchew was hired to answer these questions, leading a research group, MIT Glaciology or Glaciers at MIT.

A part of something special

In Minchew’s remarkably tidy office in the Green Building of MIT, a dry erase board spans an entire wall, facing a huge glass-plated map of Antarctica with a sticker in the corner that reads: I ♥ Geodesy.

On the map, a thick black line separates the halo of floating ice shelves from the solid mainland ice sheet. Those margins, Minchew explains, keep the ice sheet from disappearing into the ocean by providing back stress, almost like a levy.

“There is this common misconception that ice shelves, the floating bits, have a major role to play in sea level contribution,” he says. “But by themselves, they don't necessarily matter. They're already floating, so they've contributed whatever they're going to contribute to sea level. However, they can play a major role in setting the sea level contribution of ice sheets because they are resisting the flow of the ice from the land to the ocean.”

How margins behave—and thus how the ice sheet will respond to changes in climate—is one of the three primary areas of interests for MIT Glaciology. The team will use novel remote sensing techniques to look at the mechanics of how cracks form in the ice and how glaciers slip along their beds.

The latter is arguably the largest source of uncertainty in understanding projections of sea level rise, says Minchew, at least for ice sheet models. It’s still unknown how the drag, or resistance, at the base is related to the speed at which ice is traveling. For example, whether the resistance increases the faster the ice flows, whether it’s independent of speed, or whether the resistance lessens the faster the ice flows, perhaps because the ice becomes more disconnected from the base as it increases in speed.

“All these things are possible, so we don't quite know how to represent resistance in our models,” he says. “That problem has been around for a long time because it's really hard to figure out what's going on at the bottom of two kilometers of ice.”

Another unknown is how cracks in ice form and travel. Rifts, or fractures, tend to spread in spurts, with stress building up at the crack until, upon reaching a tipping point, it rips through the ice until it “runs out of gas,” Minchew explains. But that’s a “pretty superficial” understanding of fractures, he says. The Glaciers team will dig into the next level-details: how fast rifts propagate, how that rate feeds back into the whole propagation.

For example, Minchew supervises PhD student, Joanna Millstein, who uses satellite observations to map how the stress field changes on Brunt Ice Shelf before and after the propagation of a long rift, called Chasm 1—the same one that kept Minchew from Antarctica.

Despite the freezing rain drops outside his window, Minchew says he, his wife, a teacher, and their 7-year-old daughter “couldn’t be happier here.” The opportunity to spearhead Glaciers at MIT seems to have outweighed their initial hesitancy of Northeast winters.

In addition to the caliber of his EAPS colleagues and students, Minchew was also attracted to MIT because of its close connections with WHOI and Lincoln Labs, which was responsible for a lot of remote sensing development. It seems Minchew has found at MIT a team as dedicated and permanently curious as he.