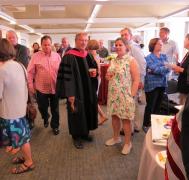 MIT charges this year’s graduates to pursue moonshots, provide others with opportunity, and lead the way on fighting climate change.

In the year of the 50th anniversary of the Apollo moon landing, MIT commencement speakers gave pause to remember those who helped get us to the moon—as well as the personal support received by grads on the way to achieving their degrees. These milestones are the product of a group effort, and the moon landing was no less than an initiative and dream shared by a country. Now, entrepreneur, philanthropist, and three-term New York City mayor Michael Bloomberg says there’s a new challenge for MIT graduates and the next generation of leaders: They must band together and step up in the effort to fight climate change and those who would deny its existence. Delivering this year’s commencement speech, Bloomberg led the charge, announcing his new initiative “Beyond Carbon” to reduce emissions, support renewables, and put fossil fuel companies out of business.

“All of you are part of an amazing institution that has proven – time and time again – that human knowledge and achievement is limitless. In fact, this is the place that proved moonshots are worth taking,” Bloomberg said.

Bloomberg concluded, “As you leave this campus I hope you will carry with you MIT's tradition of taking – and making – moonshots. Be ambitious in every facet of your life. And don't ever let something stop you because people say it's impossible. Let those words inspire you. Because just trying to make the impossible possible can lead to achievements you never dreamed of. And sometimes, you actually do land on the moon.

Tomorrow start working on the mission that, if you succeed, will lead the whole world to call you the Greatest Generation, too."

In his charge to the Class of 2019, MIT President L. Rafael Reif echoes Bloomberg, “As you strive to hack the world, please try to heal the world, too.”

The day before during the Investiture of Doctoral Hoods and Degree Conferral ceremony, distinguished biochemist Squire Booker PhD ’94 emphasized the importance of opportunity for all, and the need to expand those opportunities for future generations, in his keynote speech.

“Almost anyone can excel if given the chance,” Booker said. “Take advantage of opportunities, and make the most of them. But also, work to provide opportunities for others. That’s how you will grow as a future leader.”

Following both ceremonies, Robert van der Hilst, Head of Department and Schlumberger Professor of Earth and Planetary Sciences, welcomed EAPS graduates, their families and friends, faculty, alumni, and staff to gather in the Ida Green Lounge and celebrate the accomplishments of department members. EAPS was pleased to see several familiar faces at the receptions and welcome back many alumni!

During the Tech Reunions, EAPS Associate Professor Noelle Selin and MIT VP for Research Maria Zuber spoke at Tech Day. This year’s Technology Day symposium "MIT on Climate Change: New Research on Consumers, Companies, and Policy" presents insights and research from leadership and faculty on the ways MIT is advancing the global conversation and response to the most imminent threats facing the warming world. Watch the talks again.

President L. Rafael Reif’s charge to the Class of 2019

At doctoral ceremony, a strong call to provide opportunity for all