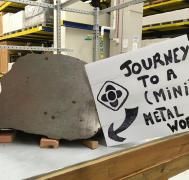 The EAPS Paleomagnetic Laboratory investigates the magnetism of metallic meteorites to understand the history of the solar system’s largest metal-rich asteroid.

In 2022, NASA will launch the spacecraft Psyche, as part of a discovery mission, that will cruise to the main asteroid belt located between Mars and Jupiter. One target: the asteroid (16) Psyche, largest metal-rich asteroid known in the solar system. Asteroid (16) Psyche belongs to a rare type of asteroids that has a higher density than rock, and strongly reflects light and radio waves. As a consequence, the asteroid is thought to be made of a large fraction of metal— mostly iron-nickel, same as in the Earth’s core.

The metallic nature of (16) Psyche, and how it came to be, remains a mystery. One of the leading hypotheses is that this asteroid once was the metallic core of an ancient, larger body, called planetesimal, that populated the solar system at its formation. Planetesimals are the building blocks of the planets; throughout the early history of the solar system, they collided, merged or were disrupted to form the planets and asteroids that we observe today. This is why most planetesimals do no longer exist in their original form.

The fate of (16) Psyche might have been slightly different than other planetesimals. Scientists, including those at MIT, think that the asteroid might have experienced a succession of violent impacts throughout its history, resulting in its rocky mantle being stripped off, leaving its metallic core exposed. If researchers confirm this, the NASA mission Psyche would be the unique opportunity for scientists to study a planetary core, usually inaccessible to measurements.

This is why (16) Psyche piques the interest of EAPS Paleomagnetic Laboratory members, including myself, a fourth-year graduate student in the lab who has luckily been involved with the Psyche mission almost from the start. Benjamin Weiss, professor of planetary sciences in MIT’s Department of Earth, Atmospheric and Planetary Sciences (EAPS), leads the group and is a co-principal investigator (PI) on the mission. In the Paleomagnetic Lab, we study the role magnetic fields played in the formation, evolution, and history of the terrestrial planets and small bodies, using some of the oldest rocks on Earth, Moon samples from the Apollo era, and billion-year-old meteorites. A commonality between all our samples is that they may have preserved a record of magnetic fields they experienced earlier in their history. It’s this laboratory work with iron meteorites, which are thought to be remnant pieces of ancient asteroids’ metallic cores, that we’re using to inform the upcoming NASA mission. By studying their magnetic properties, we can gain insight on the physical processes underwent by the very first asteroids formed in the solar system, even (16) Psyche.

Core of the issue

Metallic cores play a fundamental role in planetary evolution. For example, many terrestrial planets and moons either actively generate magnetic fields by motion of their liquid metallic core, like Earth, or show magnetization produced by extinct fields. The Earth’s magnetic field may be one of the main reasons why life could thrive on our planet: the field acted as a shield against hazardous particles coming from the Sun. Despite their importance, we know very little about the formation of planetary cores, and about the compositions that allow them to generate magnetic fields. This is simply because cores are largely inaccessible to observations.

If (16) Psyche was created by repeated impacts, it is likely that the energy delivered by those impacts contributed to (re)-melting and put the asteroid’s metallic content in motion, which could possibly generate a magnetic field, like the Earth.

To address the question of whether (16) Psyche is an ancient planetesimal’s core, the Psyche team, which is composed of scientists and engineers including MIT’s Richard Binzel and Maria Zuber, carefully chose the instruments to be placed onboard the spacecraft. Weiss plays an important role in this, co-leading the design and future operations of the spacecraft magnetometer. With this instrument, the team will investigate whether Psyche once generated a magnetic field.

How could (16) Psyche preserve the record of such an ancient magnetic field? At elevated temperatures, metal grains are free to align their magnetic moments, which are tiny compasses, with the ambient magnetic field. Below a threshold temperature, the energy necessary for the moment to align with the field becomes too high, and the moments end up being completely stuck in their latest orientation. In this way, they capture a record of the magnetic field generated at the time of their cooling. If such record, known as natural remanent magnetization has been preserved, the spacecraft magnetometer would be able to measure it provided that the signal is above the detection threshold.

This points out to the toughest challenge for the magnetometer team. They must design an instrument that will be able to measure a magnetic field with very high precision, that ranges from no magnetism to a strong reading.

But what does a “strong” field mean for a metallic asteroid? The answer to this question dictates how we consider the design and calibration of the magnetometer, the simulations of (16) Psyche’s putative field and its interaction with the spacecraft, and the analysis of the mission’s data. Up until recently, we had very little idea of the answer.

This question marked the beginning of a vast magnetic study of iron meteorites, possibly the closest analogs of the material that will be found on (16) Psyche, I started with Prof. Weiss. We wanted to know if the magnetic signal changed as we measured bigger and bigger samples, ultimately extrapolating our results to a (16) Psyche-sized object. The first half of the study included measuring samples smaller than 20 centimeters, which we could easily do in the Paleomagnetism Laboratory. The second half was where real difficulties arose. We wanted to measure iron meteorites up to 1 meter, which weigh several hundreds of kilograms and therefore cannot be transported outside of their storage facility. So, we needed to build our own magnetometer.

Since the we could not bring the meteorites to the magnetometer, Elise Clavé, a master’s student from ISAE-Supaéro in France visiting the lab, found a way to bring the magnetometer to the meteorite. Over the course of four months, she designed and built a portable new instrument capable of controlling the magnetic field applied inside the system and measuring how magnetized a meteorite placed at its center is. Her objective: measure some of the biggest iron meteorites stored at the Storage Facility of the Smithsonian Museum of Natural History, in Washington D.C.!

At the Smithsonian, Elise and I, along with Eli Mansbach, another graduate student of the Paleomagnetism Laboratory, spent a week in the storage facility preparing our magnetometer and measuring meteorites. All the while, we were surrounded by random treasures ranging from a stuffed moose to one of the rare Eastern Island statues actually not on Eastern Island. The work was intensive, but rewarding. Two days were dedicated to building and disassembling the system. Winding and re-spooling 1 kilometer of wires needed for the Helmholtz coils was clearly the best part of it. During the three days of actual research, we recorded the magnetic properties of five of their biggest specimens. In total, we worked with 2.5 metric tons of space material billions of years old. The staff at the Smithsonian was incredibly efficient and deft with all kinds of forklifts to move the meteorites from their storage racks to the center of the coil system.

Back in the Paleomagnetism Laboratory, we are now processing the data and will be able to determine whether the intensity of the magnetic signal of metallic meteoritic material correlates with the volume of the object, covering 8 orders of magnitude in volume. This will help us understand what kinds of magnetic field measurements we could expect the Psyche mission to pick up when examining the asteroid. Most importantly, we will have experimental data to compare the actual spacecraft measurements to, which will be extremely valuable in our quest to decipher the enigmatic nature of the asteroid (16) Psyche.

Since this slogan of the Psyche mission is “Journey to a metal world”, we can say this was our unique journey to mini metal worlds.

We are deeply grateful to Julie Hoskin, Richard Stoyer, Daniella Haigler and Tim McCoy of the Smithsonian Museum of Natural History for their invaluable help.