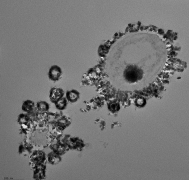 Investigating the Rise of Oxygenic Photosynthesis

EAPS scientists find an alternative explanation for mineral evidence thought to signal the presence of oxygen prior to the Great Oxidation Event.

About 2.4 billion years ago, at the end of the Archean Eon, a planet-wide increase in oxygen levels called the Great Oxidation Event (GOE) created the familiar atmosphere we all breathe today. Researchers focused on life's origins widely agree that this transition event was caused by the global proliferation of photosynthetic microbes capable of splitting water to make molecular oxygen (O2). However, according to Tanja Bosak, associate professor in MIT’s Department of Earth, Atmospheric, and Planetary Sciences (EAPS), researchers don’t know how long before the GOE these organisms evolved.

Bosak’s new research, published today in Nature, suggests it might now be even harder to pin down the emergence of oxygen-producing microbes in the geologic record.

A signal in the rocks

The first microbes to make oxygen did not leave a diary behind, so scientists must search for subtle clues of their emergence that could have survived the intervening few billion years. Complicating things further, while evidence of the GOE is found all over the Earth, these early colonies of oxygen-producing organisms would likely have first existed in small ponds or bodies of water. Any record of them would be geographically isolated.

Some scientists consider localized evidence of the mineral manganese oxide in ancient sediments to be an indicator (or proxy) for the existence of oxygen-producing organisms. This is because manganese oxidation was only thought to be possible in the presence of significant amounts of O2, more than normally existed in the atmosphere pre-GOE. Thus, finding evidence of manganese oxide in sediments predating the GOE would suggest oxygen-producing organisms had evolved by that time and were active in the area.

But it turns out there’s more than one way to oxidize manganese.

As described in the new paper, Bosak and her former postdoc, Mirna Daye, discovered that colonies of modern microbes can perform this process in anaerobic environments typical of the late Archean Eon. Unlike the organisms that caused the GOE, Daye and Bosak’s microbes use sulfide, instead of water, to perform photosynthesis, so they do not create molecular oxygen as a byproduct. Most scientists think that this type of anaerobic photosynthesis emerged as a precursor system to the more familiar oxygenic photosynthesis that ushered in the GOE, and Daye and Bosak’s microbes contain genetic machinery similar to what is thought to have existed before the evolution of bacteria capable of making oxygen.

The Bosak group’s demonstration of manganese oxidation in an anaerobic environment means that evidence of ancient manganese oxide may not be a reliable proxy for the local evolution of oxygen-producing life. It could just be a signal for the presence of other organisms already thought to be widespread at that time.

“Discovering new mechanisms by which manganese oxide might be created in the Archean environments, before the rise of oxygen, is tremendously interesting because many of the proxies that we have [used] for the presence of oxygen [and therefore, microbes capable of producing it] in the environment in the first half of Earth’s history are … actually proxies for the presence of manganese oxide,” says Ariel Anbar, professor at the Arizona State University School of Earth and Space Exploration, who was not involved in the research. “That forces us to think more deeply about the proxies that we're using and whether they really are indicative of O2 or not.”

The study of the ancient Earth has always been challenging, as evidence gets recycled by geological processes and otherwise lost to the wear and tear of time. Researchers have only fragmented and inferred data that they can use to develop theories.

“What we are finding is not necessarily saying that these people who are interpreting these blips of oxygen before the GOE [are] wrong. It just gives me huge pause,” says Bosak, “The fact that we threw in some microbes and found these processes that were just never considered tells us that we really don't understand a lot about how life and the environment coevolved.”